Passion of strokingÂ  for My feet have no limits and your mind just melt for My feet seduction ... My Perfect sexy feet and toenails,deep seductive voice what going to strain in your head and makes you follow My instructions ... you loving your JOI Addicted to My feet....craving for More .....you need this DOSE. 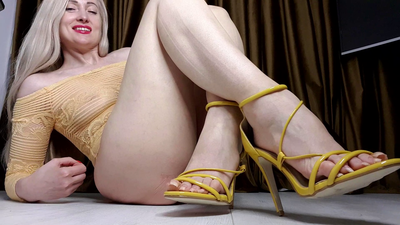 Karen wanted to find out if she wanted that idiot suzanne. What was she good for? Karen walked barefoot for a long time to thoroughly get her feet dirty. When she returned home, suzanne was given the task of cleaning Karen's feet and licking off all the dirt from them. The slave started worshiping Karen's feet and her tongue got blacker and blacker each time. Karen's feet became clean and suzanne's tongue was black.. Karen likes this exchange but she was interested in the end result.. Will suzanne be able to lick all the dirt from Karen's soles?

Watch my shiny rose-gold natural nails as I tease you with my ass and legs.I stroke my long luscious legs and big round ass cheeks.I spread my cheeks and show my hole to you pathetic ass sniffer. Lick lick bitch!

Lady Nora joins me again to torment this loser. We're both wearing our riding boots - and pull the loser into the room on his leash. Then we start to kick him! We take turns kicking his chest and stomach, but since this loser already took quite a beating today, it's really hard for him to handle the pain. After a while I order him to get on all fours and we kick his stomach hard from below - again taking turns and not giving him rests in between. No wonder he can't take that for long as well - so next, he has to lie down on his back and we trample his body for a while! Then we start with the standing kicks again, followed by the stomach kicks from below and then finishing him with trampling! Let's see how many rounds the slave can endure!