Face, throat, arms, stomach and chest -Nothing is safe under her bare feet. Jade giggles as she steps and walks all over his skrawny weak frame. He weighs about 120 pounds while Jade is a solid 145 pound ebony amazon Goddess! It's no wonder her foot sinks deep into his throat as she stands on it. Jade tramples him so deep we had to cut before he *****. She really pushes him to his limits in such a short time! 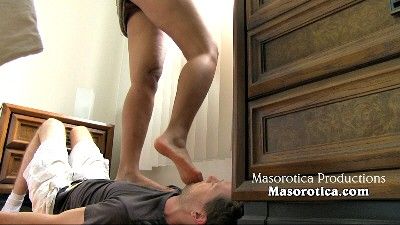 Lisa and Eva Gold takes another break and sits together on Alex. First Eva Gold sits on her groom's belly and Lisa on his face. They chats, laughts, and totally ignores their "living couch". Then they changes their poses and now Eva Gold sits on Alex's face and Lisa on his belly. With Eva Gold weight of 48kg (106lbs) and Lisa 62kg (137lbs) both girls makes Alex feel their total weight of 110kg (243lbs)! But a good husband must be a good human couch also. When they are finally rested, Lisa and Eva Gold decides to go outside. ...to be continued.

I've put the slave in the smotherbox and bound his hands to the box as well - so he can't move at all. Then I told the slave that I'm going to sit down on his face and smother him under my ass - and that he can snap his fingers when he needs to breathe and wants me to get up ... silly slave ... he really believed I'd get up :-D Sometimes I simply ignore his panicky snapping - sometimes, I trap his hands between my calves and thighs - so he can't snap at all :-D I enjoy how he's panicking more and more under my ass as he gets afraid that I might not get up in time!

ITALIAN SPEAKINGI?m joined by my beautiful Mistress friend, and she has asked me to introduce her to the technique of Ballbusting. Well? She couldn?t have chosen a better time. I have my resilient ballbusting bitch here for some punishment, and he is going to be used as our kick bag. I place him in different positions, and we take our shots from front and rear. My friend is really catching on fast, and with some punishing and painful kicks. She is able to bring our ball boy to his knees?

Mistress Alexis has had ENOUGH of her stupid pathetic slave. Anytime she sits on his face with her gorgeous ass he always tries pushing her off and just annoys the fuck out of her. So She has his full body saran wrapped before she proceeds to suffocate the hell out of him in her sweet thong. Mistress Alexis puts on her tv show and begins sitting on his face, grinding, shaking and bouncing her big ass all over his face. The slave already starts squirming from the beginning, but he cant do ANYTHING nor ESCAPE because he's all wrapped up while his face is inside his mistress's beautiful ass. Mistress Alexis changes positions multiple times from sitting reverse to sitting forwards, giving you all different views of her smothering her slaves face. This stupid slave cant take it because he starts really squirming and kicking his legs all over trying to get some air but unable to do so. Near the end you see him really struggle for his life as he literally somehow manages to escape the saran wrap by ripping his arms right through to free himself and get some air. This is a must watch for all facesitting lovers, if you are into EXTREME SADISITC CRUEL SMOTHERING, then this clip is for you. A full 15 minutes of pure intense SEXY SMOTHERING.*Filmed in 2 different angles*twitter: Sadistic416New videos every week!

Aga steps in the sneakers on the cock and balls. She plays with them hardly - walks and crushes. At the end she ftells him her slave to finish under the shoe. Time: 17.33 min. REMASTERED - movie from 2002

Princess Natalie has just returned from the gym, completing a full workout. Her shorts are really REALLY SWEATY, and she decides to punish her slave some more. Wearing her sweaty shorts, she sits FULL WEIGHT on his face and starts to grind, shake and BOUNCE all over his face. You really hear her start moaning because she enjoying the fact that her stupid slave is being smothering under her beautiful gigantic ASS. After a few minutes she turns around giving you all a sweet back shot camera view of her ass plumped over her slaves face. For 10 minutes Princess Natalie bounces, and grinds on her slaves face in her sweaty gym shorts, enjoying every second of this cruel punishment. Wouldn't you all love to be in this slaves position? Having a sexy ass on top of your face for you to sniff and be smothered by? Enjoy ;)twitter: sadistic416New videos every week!

The pony is ridden by his mistresses. Mistress Jane goes first and sits with her jeans ass on his back. Go on, run you silly pony and make horse noises while you do it! Mistress Zora meanwhile makes sure that the slave pony runs his circuits and drives him with the whip. But can the slave horse reach an appropriate speed for the ladies? To make it even harder Mistress Zora sits on him and drives him forward too!

In this clip Mistress Roxanne sits FULL WEIGHT on her slaves face, kicking her legs out adding extra pressure to his face. For 10 minutes straight she just sits, bounces and grinds her big ass on her slaves face, not allowing him any air. Anytime he tries to get some air, She quickly slaps his hands away so no air is given. Enjoy ;)twitter: sadistic416New videos every week!

The second episode of the mini-series about the domineering Goddess Angelica and the suffering of her faithful mare. In the second part, Angelica continues to ride the mare. The girl trains the horse by giving her different commands. The mare does everything according to the instructions of the Mistress. The mare gallops left, right, in a circle, back and forth, and also raises her left or right hand like a circus horse while Angelica sits on her back. The horse is tired, but the Mistress wants to gallop even more and even faster, so she urges her faithful mare on.

Anastacia tells the slave to kiss and lick her bare feet. First Alex kisses and then licks her sweaty bare feet. He also pays special attention to her soles and between the toes. When the slave is finished with one foot, Anastacia orders him to lick the other.

Today our slave's will be stapled shut - and his cock too! Lady Alice and I will first staple his mouth shut, then that's it with screaming and talking back. His mouth remains closed. No chance to open it again! Next it's the turn of his cock. We bring him down to his knees and we demand that he jerks off. The head of his dick is trapped behind his foreskin! He can't get hard, but we want him to keepon jerking!

How about a cane discipline? Our slave is tied by his hands and cannot defend himself. All the better so we can punish him mercilessly with our canes! We beat on his ass and his back, but also let the cane slap the soles of his feet and his belly! The loser doesn't deserve anything else and, indeed, will thank us at the end for the punishment! After we have untied him there is more caning and then he must kiss our shoes!

Lana has a slave girl named nataly who is always ready to keep her Mistress's feet clean. What is required of her today .. Nataly carefully worships Lana's feet and sucks her toes.

Goddess Felicity is here today. I think you know her already. You can find her previous clip Here So she came back home finding her slave laying down on the floor napping, but The Goddess doesn't seem to be happy. She went out shopping using the slave's credit card, but apparently the pin code she's been given is the wrong one which means only one thing that the slave is in trouble and he will be suffering by being trampled on in complete silence. That's what Goddess Felicity wants from him, to be quiet. He will be trampled on the entire clip on his front and especially on his stomach as Goddess Felicity loves to see him struggling for air. The trampling is absolutely full weight. The Goddess wants to know the right code and she's got it at the end, but that didn't stop her of trampling the skinny slave again.So some stomping, face slapping, boots kissing, verbal humiliation and a couple of slow motion moments are taking place in the clip.

I've put the slave in the smotherbox and bound his hands to the box as well - so he can't move at all. Then I told the slave that I'm going to sit down on his face and smother him under my ass - and that he can snap his fingers when he needs to breathe and wants me to get up ... silly slave ... he really believed I'd get up :-D Sometimes I simply ignore his panicky snapping - sometimes, I trap his hands between my calves and thighs - so he can't snap at all :-D I enjoy how he's panicking more and more under my ass as he gets afraid that I might not get up in time!

After leaving my slave locked in a cage it's time to free him. The cage in which I locked him is very small, and since he is a fat man he will have suffered a lot from being locked in there. Maybe it will have helped him to understand that he needs to lose weight. I let him out not because I feel pity for him, but just to use him and have some fun. He is a great Dr Martens fetishist, but today I will not allow him to lick the leather part of the boots, but only the soles. Who knows how much dirt I will have trampled on the street, but for him this cannot be a problem. A true slave does everything for his Mistress. In the meantime she uses him as an ashtray, and I order him to touch the tiny prick he has, if he can find it? Obviously I will not allow him to fully enjoy himself, but as I always do, I will ruin his orgasm. I don't think this torment is enough, so I take advantage of the cigarette to put it out on his balls while he masturbates. It is wonderful to see how he squirms from the burn, but his balls and his little dick are so useless that it is an honor for him to be able to sacrifice himself to his Mistress. He finally manages to squirt and, and of course the filthy sperm left on my soles will have to be wiped off using his tongueÂ