Meg and a new girl Britney are the best friends in real life. And she has become our friend too. She heards about some recording of fetish clips and that makes her interested. As every new girl, Britney is a little shame in the beginning, but after few minutes she likes it and becomes a beastt. Tiny guy dles between their thighs.

I stop the car in the middle of this giant puddle - and push the slave out the passenger's door. He lands on his knees, right in the puddle and looks at me confused â¦ until I kick him over into the puddle and start trampling him! Then I drag him out of the puddle, get my hiking boots really muddy and continue to trample him. I use him as a doormat for my muddy boots and soon his white shirt is completely covered in thick mud. I continue to trample, stomp and jump all over him - then drag him back to the puddle, push him back in and walk over him into the car - cleaning my boots for a last time - I don't want to get my car dirty after all ;-) As I drive off he has to stay in the puddle of course!

Katelyn arrives home with her friend Bianca and they discover him sleeping ontop of his assignment, Katelyn's homework, so now he must be punished. He wimpers because he knows what's coming. And unluckily for him, while Katelyn was out with Bianca they thought of much worse ways to torture him than simply having him lick their feet.He will be their slave for an entire week starting now. He follows their every command in fear of Katelyn telling mom that he's been perving on her. He licks their high heels clean, rubs and lucks Bianca's bare feet, and then both of the girls bring him outside on a leash, clear as day in front of the neighbor's to humiliate him.As he is Katelyn's bro, she feels a little bad. She sits on her bro's back as if he's a piece of furniture and Bianca takes the lead in dishing out the torture for him. She makes him bark like a dog and then brings it a step further by shoving his face up his sis ass. By the end of it they realize how much fun it is to have a boytoy so they tie him up outside to go get ready for the party they're throwing tonight, where he'll be everyone's toy!

Two lovely girls have fun with small Bambina. Russian girl Nicolina and her friend Nancy. They are more sexy than dominant. But pretty bodies and faces together with lovely blond hairs can be the perfect combination. Nancy and Nicolina enjoy while the slave girl lick their soles and toes.

My little cleanpig wasn't clean enough! I can not suffer this, because I'm used to the best! Look what I get up with little pigs who work not to my satisfaction.

Lady Shayla and Lady Divina educate their house slave with bad games and hard trampling. Their Stiletto boots leave many marks on the slaves skin during their unintended kicks. Divina cuts off his breath by facesitting, while Shayla jumps on him, both ladies repeatedly jump on him and kick his body. In the end they press his head in the toilet and then flush.

So you want to be my shoe pay slave? Then we'll make the rules now! You'll always be available to buy new shoes for me - ALWAYS and NO EXCUSES! I'll order you to pay whenever I feel like it! Of course you'll get photos and videos of the shoes - to tease you! Maybe you'll some time be allowed to worship them in real life while you're crawling to my feet! I'll now give you a sneak peak at my shoes and you'll see how much being my shoe slave turns you on!

Valeria likes to rest her sweaty tired feet after a long day with her boots on so the opportunity was just perfect to sit on her slave to watch her favorite TV show and use his face as a footstool at the same time! She just loves to humiliate him and laugh at his face so she sits on his crotch and makes him take her boots off to completely cover his face with her sweaty white socks! She has been wearing them for about a week to try our sweaty socks challenge so the smell was terrible! She takes pleasure to rub them all over his face and makes him stick his tongue out to lick the dirty bottom of her socks! Valeria also makes him take her socks off with his teeth to smother his face with her smelly bare feet! They are actually super smelly but she just don?t care about him and rub them all over his face! She makes him stick his tongue out again to lick the sweaty bottom of her soles and lick all the dirt in between each of her toes! She also makes him suck on her toes as a good devoted loser slave! Very Hot Clip! 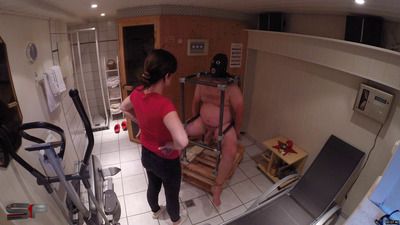 Mistress Cassi trample her slave under her new sneakers and make him lick them clean while she smoke cigarets, she then take off her shoes and ****** the slave to smell her sneakers and sweaty socks while she use his mouth like a ashtray.

I walked through a muddy puddle in front of the house - just to get my feet extra dirty for the slave! I show you my muddy feet in detail for a short time, then call for the slave and order him to lick my muddy feet clean. He has to use his tongue to get the mud off my foot soles and suck my muddy toes to clean them - while I get to relax and enjoy my feet getting pampered!

Felicia is coming back from a long bare feet walk on the street and it seems like she needs you to clean the bottom of her precious feet! She knows how addicted you are to her feet so she wants you to bow down on your knees and take some deep breaths in her feet! She wants you to describe her how bad they smell before you stick your tongue out to lick the bottom of her soles! We are not really sure exactly where she had walked but it doesn't care! Your task is to stick your tongue out and lick her feet! Felicia wants them really clean so she will give you the time to do a great job! She is actually foot size nine so it's kind of a big job! She wants to feel your juicy tongue from the bottom of her heels to the top of her toes! She also wants you to lick and clean all the dirt in between each of her toes! What dirty job! Hot Clip Alert! 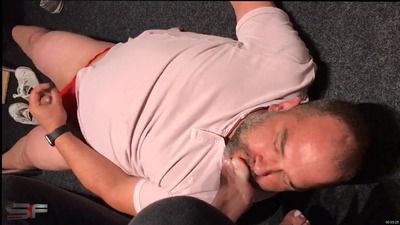 You shitty sod of a servant - this video will show you how unimportant you are to me. I will now completely ignore you. That way you can prepare yourself for what will happen if you don't obey my orders correctly. You are a loser - buying a video while knowing that I will ignore you. Maybe you should buy it again - it may well be that then I will give you some attention. If you don't I will keep on ignoring you.

In order to worship my feet i bound the eggs from my slave to the workbench. He wear a straightjacket and was not able to move. He only can do what i want. I told him to worship my feet and put of my shoes with his mouth. After a while he stand up and i fuck his cock 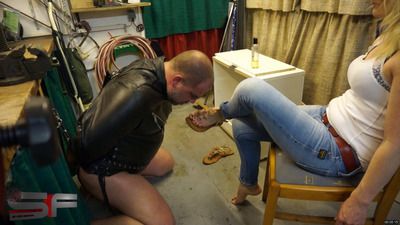 Dolores needs to give a phone call to her boyfriend after a long working day but it seems like she also needs to rest her sweaty tired feet! She sits on her slave in her favorite position and takes her boots off to completely cover his face with her sweaty nylon feet! This is just the best way to shut his mouth! She gives a phone call to her boyfriend and talks about her long working day while rubbing her sweaty feet all over her slaves face! She doesnt want to hear any word or any noise coming out from his mouth so she just makes sure to keep his mouth shut with her stinky nylon feet! She makes him lick the sweaty bottom of her soles to make sure he tastes and swallows her precious sweat! She tells her boyfriend how much she loves him while making her slave lick the sweaty bottom of her soles at the same time! Dolores hangs up the phone at the end of the conversation and keep enjoying that moment in this perfect position to relax her feet after a long working day! She makes her slave open his mouth to suck on her toes and makes him take more deep breaths in her sweaty nylon feet! Latin girls are the best! Super Hot Clip Alert!

Good morning little toad! How was your night? I have the next exercise for you! You jib at it? Forget it, whore! I pull you to me with your shackle and it could start!!! In latex!