One of my slaves was allowed to make a proverbially a monkey of himself with me today. After a befitting greeting, I have put clothespins on his nipples, his tongue and his useless monkey eggs until he looked like a cross-breeding between a monkey and a porcupine. ^^ Then I gave him a wonderfully humiliating and painful treatment before I have removed the pegs in my gentle compassionate way ^^ My spider monkey could enjoy the resulting marks for a long time.

The punishment continues! We beat his naked back again and again with our canes. Cheating must be punished properly! We stuff his socks into his mouth. This failure of a pig has deserved nothing better. How beautifully he screams and suffers tied to the tree there... That spurs us on to hit him even harder!

Mistress Alice returns to the car in the parking lot. A homeless man sits on her lap near her car and asks for charity, he needs money.Â Alice decides to smothers him, she presses with her divine snake-skin boots on his throat. A slave yells in terrible agony. This is a very exciting video.

CUSTOM VIDEO:I didn't see you for a long time, so you need to remind me how strong you are and what you will do to me during our next session. Tell me how long you will sit on my face, show me where I must kiss your ass....Mention my name in the video...

I'll use this slave as my foot slave under the desk today - but I start off by ordering him to write I'm a dumb foot slave on the whiteboard a couple of times. Then he has to go under the desk and I use his face as a footstool for my sexy GML boots while I work on my computer. Of course, he has to worship my boots as well, kiss them, lick the soles and suck the heels! Later I order him to take off my boots, so he can worship my nylon feet as well. After half an office day in these boots they surely have a nice smell of foot sweat and leather to them! At first he only has to smell them, but then I order him to lick them as well and suck all of the foot sweat out of the nylons!

I decided to raise the bar even more. At first everything went smoothly, but then it got really difficult as the nails began to stick hard into the body when four girls were standing on top. But I was determined to break the record and I did it! Four girls were standing on that little board. When you watch this film, you will laugh at all those shows where one person stands on a board with nails and the whole audience gasps. Time: 27.36 min.

ENGLISH SPEAKINGCUSTOM REQUEST - I would like a short POV foot domination video with you humiliating me, saying my name Levi (pronounced Lee Vai). Please use me as a footstool in your video and talk about how you love to dominate young boys. Please mention my name a lot. And also if it?s not too much to ask, please spit on your feet Mistress!

The humiliation for the nasty and fat slave continues. Nicole decides to take this loser to the top floor of an abandoned house. She orders him to crawl behind her feet and lick her dirty sneakers. Nicole wipes her sneakers on the ground and the slave licks all the dirt and sand from her soles. He's disgusting Nicole .. she insults and spits at him. He doesn't even have the right to talk to her! The idiot's tongue turns black with mud, but Nicole is amused. "You're just a stinking piece of idiot! Why are you such a pathetic nonentity? Wait a minute .. I don't care!" - Nicole said and continued to wipe the dirty soles of her sneakers on his tongue. (English subtitles)

Dance teacher Laura: My feet are very skillful and I know that many people look at my feet when dancing, but I've never had a human carpet in my kitchen :) First I walk around on my victim in my pink house socks and let him my socks kiss and lick. Then my human carpet can feel my bare feet. I trample on his body and on his face. I stand on his face with all my weight and imagine what a feeling and what a beautiful view it must be for him. My feet never get cold with a human rug. Maybe I'll keep him and torture him under my feet.

The life of a slave to Goddess Vanny is not easy and this slave will suffer a lot! Goddess Vanny wants to play a game with the slave. What does it look like? He is her personal playground on which she paints little circles over his naked torso. These are points where Goddess Vanny will place her spiked heels. She stands on the slave and drills her heels brutally and deeply into his belly and chest. Goddess Vanny has a lot of fun but the slave suffers greatly and whines miserably!

The humiliation for the nasty and fat slave continues. Nicole decides to take this loser to the top floor of an abandoned house. She orders him to crawl behind her feet and lick her dirty sneakers. Nicole wipes her sneakers on the ground and the slave licks all the dirt and sand from her soles. He's disgusting Nicole .. she insults and spits at him. He doesn't even have the right to talk to her! The idiot's tongue turns black with mud, but Nicole is amused. "You're just a stinking piece of idiot! Why are you such a pathetic nonentity? Wait a minute .. I don't care!" - Nicole said and continued to wipe the dirty soles of her sneakers on his tongue. (English subtitles)

You read that right - make your will! You want me to be well taken care of. I know that's what you want When you are underground I celebrate life - with your money hahahaha

ITALIAN SPEAKINGFor some time my fat slave hasn't respected the diet I prescribed. I can't take it anymore, it's a pile of lard. I don't know how to make him lose weight anymore. Today I'm in the company of a dear mistress friend, and we decide to subject him to a harsh and humiliating treatment. We placed him in the kennel and called him outside to show him around. He doesn't look like a pet at all, he barks awkwardly, and has an equally sprawling step. We are not there! So we begin the treatment to which he must be subjected. I bought a can of pet food for him. The quality of the food is very bad, in fact, it costs very little... I would never give my own pet ??such rubbish, but for this bitch it is enough. As soon as the can is opened, a nauseating stench comes out and I pour all the contents into a bowl. At first I am good to him, because I step on that disgusting food with my beautiful shoes allowing him to lick it off the soles. However, soon after we begin to be meaner to him. In fact, we sink his face into the bowl of waste, making him eat like a bitch, and he doesn't complain. However, he is so greedy that he likes this very lousy food. After a while we do something else to have fun. We take the spoon and feed it nonstop until its mouth is full of that lousy food. From now on, the only food he will be able to eat will be this. Who knows if he will finally be able to understand that he has to stop eating too much to get rid of all that lousy lard he's wearing!

ENGLISH SPEAKINGI have my slave positioned under my rack of beautiful expensive shoes, and I'm going to use him as my door mat for a little while. I have chosen a beautiful pair of stiletto's for his suffering. I'm sure you will enjoy seeing me trample on him, and make him squeal for mercy. Of course I enjoy making him suffer, and there will be no mercy. Only his squeals, as he endures the painful trampling of my stiletto's Jagged Edge...

Well, my little saddle, are you ready for a nice ride? I'm for sure - and in case you don't behave ... I brought along my little opinion booster :-D How does it feel to be used by me like this? To be helpless under my ass, no air to breathe and completely at my mercy?! But I'm sure you want to please your mistress and you'll do your best to be a good saddle, won't you?! I know, it's getting harder and harder the longer I sit on your face ... but you'll make it - as a real saddle you should accept that you'll be used mercilessly and you'll have to endure it!

ITALIAN SPEAKINGCUSTOM REQUEST - I love submission done for fun and with a smile on your face. I would like to see you in a home environment dressed in shorts and slippers. Your boyfriend is lying at home lazing around on the carpet shirtless. You go around the house, and every now and then you approach him and taking off a slipper put your foot on his chest. You torment and humiliate him by telling him You are under my feet only to be my dominated house pet. So stay down bitch ...

The punishment continues! We beat his naked back again and again with our canes. Cheating must be punished properly! We stuff his socks into his mouth. This failure of a pig has deserved nothing better. How beautifully he screams and suffers tied to the tree there... That spurs us on to hit him even harder!

A girl in black high-heels walks on our friend's chest. This is her first time doing this kind of thing, but she really gets into it. She seems to be a natural, stepping with her full weight on her heels and not being nervous at all. She is tall and weighs over 60 kilos. Then a barefoot girl joins her and she starts to step and jump on his hands and stomach. She loves to stand on his fingers. Finally, she stand on his nose. Time: 5.12 min. 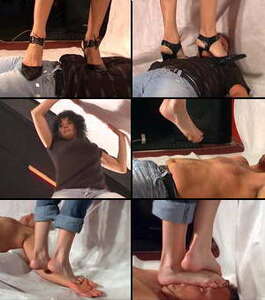 Ellie calls you over to her house super early in the morning to ask you if you'd like to join her this weekend at the anime convention. She's in her Toga cosplay but you didn't bring anything to wear. Luckily she has you covered! You can borrow her schoolgirl Uraraka, complete with big padded bra and silky satin panties to look like a real cosplay girl. You might be reluctant but Ellie convinces you that you'll have a blast and that guys won't be able to keep their hands off you when posing for photos. Not to mention the 18+ panels and the orgies that tend to happen late at night. Lots of con-goers are heteroflexible, if not just downright gay, so let loose! It's always wild at an anime con. The weebs know how to PARTY! Think about all the DICK you both will share in a hotel room. Your holes will be stuffed full and it'll be a wonderful time made better all because you decided to crossplay!