Time for a comfy smoking break after Iâve fucked your asshole several times today. Of course Iâve got another task for you to calm down, because Iâve notived so much dirt and dust on my boots and I really canât accept that! So move your flannel and clean my boots devotedly with your tongue until they shine like theyâre new again! I demand your highest commitment and I donât wanna wait the whole day, so get stuck into your work and prove to me if youâre a good bootlicker, slave! I wanna see your devotion by cleaning my boots from all the dirt under my soles and on the lace.

Holy Fuck! Let me introduce you here this 18 y.o. Brat Maggie! It seems like she was born with a slave at her feet! She was really mad at this loser for some reasons so she wants to give him a punishment! She makes him bow down on his knees and stick his tongue out! Your task is now to lick the bottom of my dirty shoes! I want you to lick them with your tongue until they are perfectly cleaned! She laughs at his face and check out his work! Maggie also takes her shoes off to smother his face with her smelly barefeet! She rubs them all over his face after sweating all day long in her shoes! She also covers his nose with one of her shoe and orders him to take a deep breath inside! She also makes him lick the bottom of her sexy soles and such each of her delicious toes as a good little slave! What a Bratty Chix!

How hard can I slap the slave with my feet? I'm having fun and the loser suffers as my feet hit his face! Of course he has to smell and lick my feet in between as well! And if he doesn't lick them good - he gets more slaps with the foot - until he finally understood how to properly lick feet!

In this video, I and Rachel reveal to you our best kicks in my husband's balls. For that, we decided to use my everyday pumps ! The best of your Mistresses !!Categorie : ****** ballbusting ! 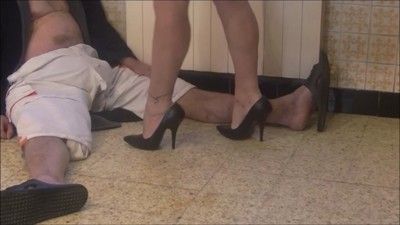 Teodora and Deborah in the role of spacewomen who dominate over the men from Earth. Dressed in shiny silver and gold, they test the human body. The guy is abducted by beautiful aliens and he is the guinea pig under their feet. They will proof that human skin is tiny and resistless on their claws.

I make the slave lie down under my big van - with only his head sticking out and then get into the vehicle. He knows the van is very heavy - over 3000 kg / 6500 lbs - and he gets really afraid when I start the engine and the tires start rolling - but he has clear instructions not to move! I drive back and forth - touching his shoulders a few times and I just love how he flinches when the tires get closer and closer to his body - and even more when they touch him - he really knows I could - and would - crush his pathetic body flat if I felt like it! I stop the car with his head right under the driver's door - step out by walking over his face and then make him lick the dirty soles of my red converse. After a while I pull him out a little further and trample his chest while he licks my shoe soles!

She is over 6 feet tall beauty with about 70 kilos (154 lbs). Pretty feet 39 size, long legs and beautiful face. Aurora's puppy worship her sweaty feet in pantyhose.

I want cash - do you understand?! Come on, give your money to me - it looks way better on me anyway. What's a loser like you using money for anyway - you like it far better when I use it to buy new high heels or sexy lingerie. And the more money you give to me ... the more I'll recognize you. You know I wouldn't waste a second on you if you wouldn't pay me - so you should be thankful to be allowed to pay me! You'll now give me your cash - and then you'll be allowed to kiss my ass and feet. And as a special reward I'll also use you as my human ashtray!

We've a visitor! Young Gregor is visiting and has a special request I won't deny. He was always humiliated by his step sis - she simply grabbed him and slammed her ass on his face to prevent him from breathing - while laughing at him and holding his hands tightly. What will Alektra and I do with little Gregor?

DOMINA KATE goes out on the prowl and lures an unsuspecting young man into her lair. Feeling dead sure of his conquest, he thinks heâs in seventh heaven; but as the latch clicks shut behind him, the plot takes a wee little turn. Instead of opening HER blouse, KATE unveils her boxing skills and scores a first round knockout. When he comes to much much later, he finds himself ever so nicely gift wrapped, spread-eagled and ready for special therapy in the bright, welcoming clinic of the Palace of Sin. His capable, enchanting therapist has some good news for him. His condition is incurable, which means his therapy will last forever and ever.

Goddess Victoria loves to walk around in her old flip flops on a hot day. But they get very dirty and sweaty so from time to time they need to be cleaned. Slave girl is expected to lick the dirt out of flip flops and when she is finished to pay her undivided attention to cleaning Victoria's dirty, sweaty feet!

THE REFINED SOMALIATRIX tries in vain to teach HER tootsy-besotted bumbler how to properly open a bottle of champagne. By now the GOURMET DOMINA is fed up, and slavey wavey has been fed all over the place. Have you ever seen anyone dawdle so long over dinner? Heâs like a whiney little kid who wonât finish his carrots. Bored with his unworthiness, THE DEMANDING GOURMETRIX gives piggy a Foot Dinner he wonât soon forget. Turning his tongue into a mop, THE IRRESISTIBLE ENCHANTRESS finds a better use for it on HER grotty floor. All the floorâs a plate for sorry saps who forget to bring their dinerâs club card. He waddles into one of Berlinâs finest eating establishments with a pathetically smeared and dirty face, but the LUSTY LARA is only too happy to wash it for him. MRS. CLEAN gets rid of grime and grease and dirt in just a minute, MRS. CLEAN will clean your whole mouth and everything thatâs in it. SHE soon has him snacking in HER rainâ¦But little slutty tongue just canât do nothing right, so SHE gets him back in the cage where he belongs and lets him ponder his utter uselessness on all fours for another sleepless nighty night. Donât let the bedbugs bitey bite.

Your meaningless life is worth nothing. So miserable creatures like you can only treat like dirt. Or better yet, we will use you to get rid of our shit. You are trash! Today you're going to suck our socks clean. One after the other. At my still glued the crap out of the locker room from the Fitness Center. Since the cleaning lady has not been cleaned much. Regardless, this one has so idiots like you! Suck My socks clean you stupid dog!

I've bound the slave to a tree in the woods - and then make him lick my dirty boots! He has to clean the dirt-covered boot soles with his tongue - and of course they're extremely dirty after wandering around in the woods. I watch him closely as his tongue gets more and more dirty - while my boots get cleaner. In the end I couldn't resist to rub my boots in the dirt again - and then make him lick them AGAIN :-D

Felicia is coming back from a long bare feet walk on the street and it seems like she needs you to clean the bottom of her precious feet! She knows how addicted you are to her feet so she wants you to bow down on your knees and take some deep breaths in her feet! She wants you to describe her how bad they smell before you stick your tongue out to lick the bottom of her soles! We are not really sure exactly where she had walked but it doesnt care! Your task is to stick your tongue out and lick her feet! Felicia wants them really clean so she will give you the time to do a great job! She is actually foot size nine so its kind of a big job! She wants to feel your juicy tongue from the bottom of her heels to the top of her toes! She also wants you to lick and clean all the dirt in between each of her toes! What dirty job! Hot Clip Alert!

I'm in the woods again with the slave and found this deer stand - a newer one made entirely out of metal. I order the slave to place hands on the steps and then start trampling his fingers and hands under my boot soles. As there's only a limited surface area on the steps my weight goes down on his hands and fingers extremely concentrated - and obviously he's in much more pain than with a normal hand trampling. But that doesn't keep me from trampling them brutally and even jumping on them! In between I make him kiss and lick my boots as well. And towards the end he has to get on his knees and I walk back and forth from his hands to his shoulders and back. A very pleasing experience for me - and a very painful experience for the slave!