Goddess Gloria slaps Joschi with their gloves. The sadistic, aristocratic-looking lady tells him to kiss her hand next. But wants to engage in the moment as Joschi after her dainty hand in the glove, she has him back Dont touch! And gives him a slap.

Peter has to return to the sexy but strict teacher. This time it's not just done with a few tasks. The teacher has no patience anymore. The student is humiliated with words, gets spanked properly with the cane, hearty face slaps and must lick her nylon feet as a punishment. Lady Karame wears a white blouse, a old school skirt and sexy gray nylons in hot mules.

Richie begs to be allowed to smell and to kiss Vanessas feet; Vanessa suggests him a game after that at which he is tied up; Richie already has hopes, as tied up this probably they will he etc. keep their feet into the face. But it comes differently; Vanessa triumphs over Richie with female power; She plays with his randiness; Yes, he gets her feet, keep a bit different, however; His face puts you for themselves in front of him and pushes feet away with hers; She only keeps the foot short again so as if he might lick it to, him at once, push into the face again with that; And there are a couple of crashing slaps with her feet on its cheeks from time to time, too; Vanessa enjoys this to humiliate a man by its own randiness; He grabs you at the nose and shakes degrading him with that and misses him offending slaps; And it laughs to it for him at all the time; He then gets, it finally happens one of its feet to him also again anyway when he wants to kiss and to lick with the foot away, stuck by the face.

Again an EXTREME clip with the sadistic Miss Chrissa, see how the slave is at her feet and has to let several times a glowing cigarette on the tail. Of course, Miss Chrissa then expresses her fag cruelly on the glans of the slave's cock and very painful for the slave.

Melady and their friend Cindy have a good time with their slave Richie. The two Ladies make it to themselves comfortable on the windowsill and let their feet dangle down. You order Richie to smell their feet. However, as Richie for this with his face more nearly to their feet close come, they push his face away with the feet and laugh at him he wanted to smell at the feet! . finally they completely push him on the ground and jump off the windowsill. During him Cindy holds her hands tight, misses foot slaps slapping him Melady with her naked feet again and again on his cheeks. Richie must hold out both cheeks and slaps them to him again and again with their feet on this. Cindy then comes to the row and misses him some juicy slaps with her feet in stockings. The two finally slap him on both cheeks simultaneously with her feet so that Richie bears hardly more it.

112916 - Verbal humiliation Tease and Denial for you Footloser! 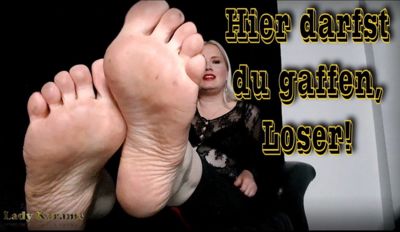 10164 - YOU are a celebrity in loser heaven for little cocks!

You and your little mini dick are pathetic! Your tiny cock is ridiculous! I won't keep it secret any longer. I will make it public and show the whole world how small your slave dick is. Just the thought that soon everyone will know about it makes you nervous - and you're right to feel that because I do not make jokes! I will show everyone your small willy. Absolutely everyone! You and your little mini dick... you will become a celebrity in loser heaven for small cocks! Because something so ridiculously small as your prick has never been seen on Earth! I'm telling everybody NOW! 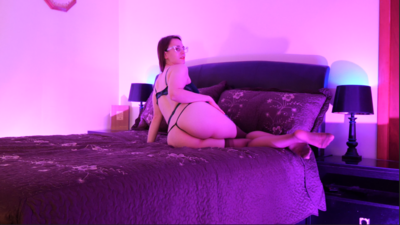 In the last part of the video 'True Humiliation ******' - part 7 - the bi-slaves are whipped until the strokes are properly visible! The two losers have to reaffirm again and again that they worship us as goddesses!

ITALIAN SPEAKINGI'm in a playful mood, and my slave is going to join me in having a swinging time. As you can see I have him helplessly bound in the sling. There's no escape for him, and I'm going to make him suffer. I know he's wondering how I'm going to pleasure myself, it's not too long before he finds out. After hoisting my bitch up, I quickly begin to make him suffer. With my beautiful hands wrapped tightly around his face and mouth, he begins to gasp for air. I also hold his nose, making sure there's no way he can breathe. I move from side to side of the sling, using both my hands along with some really tight single hand over mouth presses. My sluts eyes begin to bulge as my beautiful hands completely control his breathing. I'm so enjoying myself, as gasp after gasp my slut struggles and squirms in his sling. It's a great way for me to relax, as I continue to make my bitch suffer under my breathtaking smothering hands...

Slave Joschi must collect foot slaps as a whipping boy of his mistresses today. With the head he must support himself on the couch. Melady and Sadistic Cindy stand in line respectively on the left on the right of it and their feet leave hard against its cheeks krachen., till only shout Joschi at which the different one one is. It becomes about extremely verbally degrades, offended and sworn, all the time of the two.

I realized how much you love my feet. How you stare at them and start drooling as soon as I put on nylons. Therefore I have here a very special video for you. I show you my beautiful feet, from all angles, in black nylon pantyhose

While Lady Alice takes care of the slave's nipples, the slave has to wank his cock. Pain and jerking should always go together for this loser. My girlfriend Lady Alice likes to squeeze his nipples. It continues with slaps to the face and verbal humiliation.

This is very old video with Alex. Nina continue to dominate Alex. She sits on the slave with her full weight, smokes, and uses him as an ashtray. Nina also hold Alex's hand with her high heels to prevent him from moving. She also put her feet in dirty street shoes on the slave's face and uses him as a footstool. Then she tells Alex to kiss her sweaty feet in stockings and then her bare feet. After that she coerced the slave to smell her stinky stockings. Just because Nina all time sits on the slave with her full weight he feels bad and she decide to sit on the regular chair but continue to dominate Alex with her feet. While Nina listen music and read a book her slave are kisses and licks her feet and sucks her toes. At the end of this clip you can find short backstage video.

Come over her and get into position! I had a really long exhausting day and you'll take care of my feet now ... you'll worship them, smell them, kiss them and massage them! Come on, get to work! Fresh out of the high heels and directly onto your nose! Inhale the intense scent of my moist nylons and kiss them! And then you'll massage them, starting at the heels, working your way up to the balls and then to the toes. And do your best - otherwise I'll have to replace you with a more motivated - or more capable - slave! And in the end, I'll simply use your face as a footstool - with your nose right between my big toes! This is a non-exclusive custom clip for a fan. If you want me to do a custom clip for you, send me an email to marissa@madamemarissa.com!

The slave is trapped in the smother box and his hands are firmly bound together - this way he's completely under my control - or under my feet's control to be more precise! I start to smother him by pressing my feet in dirty white socks firmly on his nose and mouth, hurting him with the pressure on his nose and smothering him mercilessly! I try out a couple of different positions, before I take off my socks and continue to smother him with my bare feet. He's struggling and whining so much, that I decide to add some duct tape to his mouth - that makes it even easier for me to smother him under my foot soles and prevents him from both talking and breathing through his mouth! Now I can simply control his life by pinching his nose between my toes and enjoy the horrified look in his eyes as the air is getting thinner and thinner! Maybe I should check the emails on my phone?! Hopefully I won't forget to give him some air in time!

I realized how much you love my feet. How you stare at them and start drooling as soon as I put on nylons. Therefore I have here a very special video for you. I show you my beautiful feet, from all angles, in black nylon pantyhose

Alisa decides to play with her slave girl and orders her to sniff her socks. Then she pushes them into the mouth of a stupid slave girl and makes them chew them. There is nothing left for the poor slave to submit to the humiliating orders of her young mistress. Then larisa begins to lick Alisa's feet and soles and also suck her toes. Alisa lights a cigarette and spit into larisa's mouth. Having finished the cigarette, Alisa puts out a cigarette about the tongue of this idiot slave girl and smudges her feet in the ashes and orders to lick her dirty feet to humiliate larisa even more. F/F foot domination. (English subtitles)