While Goddess Victoria chills in a comfortable leather chair the slave's job is to use his long tongue to clean her boots and kiss her heels. After the dirt is successfully removed from the boots, the sweat and any strong smell must be removed from her nylons and feet. To satisfy Goddess Victoria takes time and only a few slaves get the chance to serve under her divine feet...

Pretty blond Nicolina is back. She sits at the bar while one pervert guy flirts with her. If he does whatever she wants, maybe he'll be able to convince her to be with him. Stupid and naive, he will do everything for her. She wants to see his cheeks become red. Face slaps right in his face.

Once paid, "the Countess" for my young TV Bitch, I lead you in the SM chamber where the small, submissive sow must wait like! My excited novice whore needs present themselves, is assessed by your client and ausgegriffen everywhere. I - pimp Marinelli - impart her case humiliating commands. Willing, nasty sluts and TV Schwanzzofen always able to bid in my chat. More hearing hookers go buy for me, I can always use!

I show you how I properly cleaning face of my bitch. I use soup and washing-up liquid and order him to swallow all the foam. I humiliated him with this kind of cleaning every second evening to show him how pathetic and stupid he is.

Hi loser! Look at you staring at my beautiful feet already! I wiggle my toes and point them in your face. You want to clean them? Like I would ever let you touch my feet with your pathetic tongue, HAHA!

This is one of our older clips, so make sure you do not already have it, before you purchase it. Two young students Kate and Petra keep a bootlicking slave to take care of their boots. In this clip they ignore him, while he has to lick Petras boots. He licks all the streetdirt from her boots, before she leaves for a date.

Goddess Bianca loves to intentionally get her feet as dirty as possible so she can watch her slave girl lick it all off. She will not be satisfied until little slut has completely removed all traces of dirt and smelly sweat!

Hey what a hot and sexy bitch in latex we got here right now? Well, I have a new toy as you can see. You now may watch my examining of my new slave girl Akasha. I think I will keep her in my property and train her as I wish. What do you think? 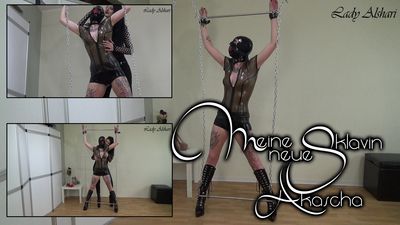 Famous Aqua and lovely Maddy are together in new adventures. We got a man specialy for them. To serves them, to enjoys in pain beneath them and to obeys whatever they want. Enjoy in these beauties. Some easy scratching by lovely ladies.

Damn! It seems like this 18 y.o. Brat Pamela also wants to take advantage and abuse this foot bitch! She makes this loser bown down to lick and clean the dirty bottom of her shoes with his tongue! How does my filthy shoes taste bitch? Pamela also takes her shoes off to smother his face with her stinky barefeet! She forces him to take some deep breath in her feet and laugh at his face! She also makes him lick all the sweat and dirt at the bottom of her soles as a good little bitch! Pamela now wants him to suck all the dirt in between each of her toes! Another Hot and Amazing Clip!

Today we are going to give our slave a good whipping. He has not been worthy of our attention and we left him in a corner most of the day. However, as it's getting late and we are going out for dinner. We have decided to give him something to think about before we leave. We begin by getting him to crawl over to us, then we tightly bind him to the cross. To give him some idea of what to expect, we dig our nails deeply into his skin and painfully scratch his back. My friend has a heavy flogger, and I have chosen a short whip to make him suffer. We begin with some light strokes, then up the intensity as we both take turns at giving him our heavy lashes. We are really enjoying ourselves at hearing our bitch squeal with pain. We give him a short break from whipping, only to once again give his back and ass a painful scratching, and give his cock and balls a squeezing for good measure. I finish him off with some heavy strokes before leaving him on the cross, where he will remain for the night. My friend and I will enjoy our evening meal after our appetizing workout...

Mistress Lydie turn back after her sport, she find her slave waiting for her with a high heeled shoes gagged in his mouth. Mistress Lydie clean her disgusting sneakers with the toothbrush's slave. after the cleaning of her soles, she takes of her shoes and orders the slave to smell her disgusting socks, she make nim lick clean her socks, gagg his mouth hardly. 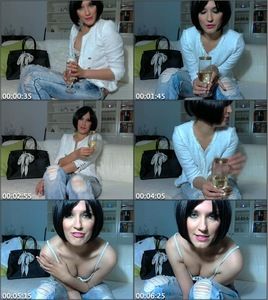 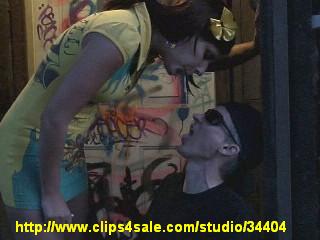