Enjoying a quick smoke before starting a cam show, I tease you with my body and tell you all about everything I plan to do. A loser like you doesn't deserve to watch, but maybe I'll order you to, just so you can see for yourself what you're missing. The only reason you exist is because mind fucking you is entertaining.

Anyone who keeps up with my blog or twitter knows of my hopelessly addicted fool, Yonantan aka "pindick." I get such a kick out of this bitch I decide to tell my friend Alex all about him. How obsessed he is with me, how tiny and useless his cock his, how ugly his wife is, and how often he denouncing his marriage to worship me instead. Sure, he tries to run away, but he ALWAYS comes back. Don't they all?

Charlotte is another hot twenty years old girl who heard about our sweaty socks challenge, and it seems like she really wanted to give it a try! The rules are kind of simple. This loser slave will have to deal with her sweaty feet in his face for sixty minutes straight or she makes a two hundred dollar bonus in cash! She has been wearing the same pair of black socks for a full week just to make sure she will win this challenge so here we are! She just make sure the rules a very clear with the slave, before she gives him the call to take her sexy boots off! She immediately covers his face with her sweaty black socks with a cruel smile of satisfaction, and just starts the first episode of her favorite series on Starflix! The slave will have to obey her commands for a full sixty minutes while she is relaxing and watching TV with a good glass of wine! Charlotte really wants to make fun at him so she makes him take some deep breaths in her socks! She also makes him stick his tongue out to lick the sweaty bottom of her socks after she was worn them for a full week! That was gross! Charlotte also takes her socks off to totally rest her sweaty tired feet on his face! She makes him take some deep breaths in her feet again, and also stick his tongue out to lick the sweaty bottom of her soles! She clearly loves to dominate! The full version of this challenge clip is forty-three minutes! Charlotte looks totally hot with those black leather pants, and so sexy with her cute French European accent! Another instant crush!

My liitle foot are so cute and dangerous at the same time. I have a lot of fun when I use my slave boy like a trampoline and he's begging me to stop. I think it may finish with broken rips at least. Sorry for focalize camera few times on the clip.

"I like my mistress Sibilla and I will do anything for her. Whatever she wants. I like to be helpless with the cuffs and under her mercy. To feel every part of her body on me, to feel her weight!" Kacie Sibilla crushes her throat under her feet in fishnets. You know her great choking style.

You're curious about what I'm wearing underneath my clothes? Come a little bit closer and I'll show it to you! When I stick my ass towards you and pull my leggings down bit by bit, I stroke my tasty ass with my gentle hands.. this scene will drive you crazy boy, and you immediately start to worship my incredibly tasty g-sting ass. As I start to move my ass cheeks, you become a slave to me absolutely. You don't even want to see any other whale tail ass than mine!

In case you haven't been doing your homework and paying attention, this week is my Birthday. And that is a cause for both of us to celebrate. Me, because I am celebrating another year of a perfect life, and am looking forwards to an even better year. And you should be celebrating because I give meaning and purpose to your otherwise dull vanilla life. Look at me! Is there anything else that gives you pleasure like gazing at my perfect body, feeling my dominance? I'm another year older, another year better. I bet you thought that I couldn't get better, did you? To be frank with you, it's not easy improving on perfection, but I've done it. And I bet you're glad that I did! Sagittarians are ambitious and always have a goal or a vision they are seeking to fulfill. In short, they want to get ahead in the world. So do I and you love me to be the strong, unreachable woman you can never ever have ! Keep paying my perfection or get started doing it. Every slave who joins my army of losers has to buy this clip ! NOW !

Another amazing clip! The slave suffers one of his most brutal and painful beating yet at the hands of two superb Mistresses (OCEANA and SAPHIRA). Those two "Goddesses of pain" use all the tricks in their arsenal. Vicious face slapping (full-powered), even face punches, are raining on him. Great whipping is done with the intention of leaving marks on his body. Body punches and knees to the body are also part of the program in this non-stop and (very!) brutal action clip. "Intensity" is the word here. intensity as in intense beating done by two terrific Mistresses.

I know that you love totally flesh-colored nylons.Look at My slender, toned legs!I'll fuck your brain to mush, until only one function remains:Paying at a beauty in nylons !!My lovely big feet let you forget the last of mind ... you're fucked in every little turn of your loser fetish brain !!It is to fold like a switch, like a machine.I can press this button, without I have to do a lot !! you are powerless against such beauty and dominance!

Lady Deina loves to walk on the slave's face. Really. She gets enthusiastic to do it, she even gets poetic when speaks about it, how she enjoys the feeling of the slave's face crushed under her feet, the balance that she has standing on it and the power that she feels when she feels a man's head under her merciless feet!Breathtaking Lady Deina starts the facestanding and she cannot stop! She stands on the face of the slave full weight and with incredible balance and style and she walks on it without mercy, melting it under her perfect feet! She goes off just to change position and she even kicks and stomps it as she stands, or she footslaps it really hard. Just see her expression while she does it! EXTREME action from extraordinary Lady Deina! 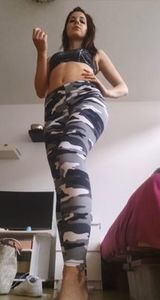 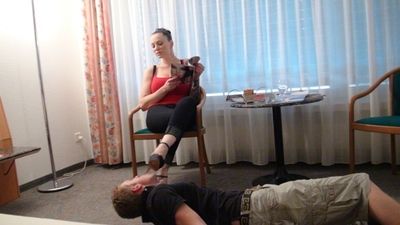