Absolutely spontaneous trampling. I was in such a good mood before a date with My boyfriend and decided to trample My slave. Firstly I made this carpet to tie My laces and then clean my favorite high dr.Martens with his tongue. I have such a good and sadistic mood to trample My slut's face, to kick and jump on his chest. He was begging Me to proceed this action, tearfully thanking Me for the pain, that I inflicted to him, I totally love such submission!

Three self-confident athletic girls dressed in brightly colored yoga pants are doing a demonstration workout improving their buttocks, while a bound slave girl sits in the corner and looks at those divine buttocks, realizing that she must submit to them. Mistress Kira, as a fitness trainer, trains Mistresses Jucy and Agma on purpose so that during sitting their asses are clearly visible for a miserable slave girl. After all the dominant girls have worked out and sweated, it's time for the bound slave girl to sniff each of them's sweaty ass. In Mistress Agma's sweaty ass, the face of the lesbian slave was first dipped, Subby BB obediently inhales the aroma of the divine ass in yoga pants. The next ass to be served is Mistress Jucy's ass, Mistress Kira presses the face of the slave girl into the sweaty ass of petite Jucy so that the slave girl inhales sweat from the deepest place between the buttocks. Then Mistress Kira deliberately started to squat down to sweat even more, and then ordered the submissive bitch to worship and sniff her divine ass. Now the slave girl needs to show herself how much she is ready to bow to her more beautiful Mistress, so she kisses their asses reverently, first each separately. Then all three lesbian Mistresses lined up in a row so that the slave girl kissed all three asses almost simultaneously. And in order for the slave girl to taste the smell of the sweat of her Mistresses' asses, the Mistresses took off their yoga pants, stripping their buttocks and panties. Now the skinny submissive bitch kneels before real beauties and kisses and sniffs the bare buttocks of Mistresses JuÃÂy, Agma and Kira and sniffs their sweaty panties on their asses. But the humiliation of the slave girl was just beginning, the Mistresses put her on the floor, and they began to saddle her face in turn, arranging for her a lesbian face riding and facesitting lezdom. Then the bitchy Mistresses remembered that they were sweating not only on their asses, but also, for example, on their armpits. Therefore, now the slave girl is sniffing the sweaty shaved armpits of Mistresses Kira and Agma and the sweaty hairy armpits of Mistress Jucy. Then the three Mistresses sat side by side, stretching their legs in dirty and sweaty socks forward, ordering the slave girl to sniff and kiss them. And finally Mistresses Agma and Kira squeezed the head of the slave girl, pressing her face into Agma's ass, and Mistress Kira pressed her pussy head of the slave from behind, starting to imitate movements as if she was fucking the girl in front, but at the same time, between these girls is the face of the humiliated slave girl Subby BB.

Mr. Faith continue to use his boy Myke. His new friend promised to satisfy his every desire. So they wanted to be live with their fans again and recorded the whole session. This is the second story of their live session, just as it happened (splitted in many parts).ÃÂ actions : Bisex play, fucking, gay play, bisex play, cock sucking training, cock rings, finger fucking, lush in ass, french kissing and many many other kinky things...Clips recorded with GoProMax. This is episode 9

This is what happens when this slut jerks off without my permission and thinks that I won't know about it. His hands will remember the rough soles of my boots for a long time.There are also many jumps and finger crushing.

I just sitting and chatting with My boyfriend, while this pathetic loser laying under the table beneath My feet and trying to please Me by licking My vans. But I donÂt give a fck and totally ignore this nonentity. Sometimes I carelessly twist his fingers under My foot, like there is nothing under it. What a loserÂ

This time My slave was tied. I started to trample him with heels and even some jumping. Then I kicked off my shoes and continued in stockings. And there is a bonus in the end - My beautiful bare feet.

Lady Luciana has been riding her slave pony for a while. It is very thirsty by now. She finishes her long ride and gives the pony its deserved water... by spitting on her boots. This pony gets only the best spit to drink and has to lick it off his mistress' boots, over and over again, until Lady Luciana brings the slave pony back to the stable.

We both know why you are looking at this clip! Because I am so much hotter than she will always be! I ooze sex appeal, my shiny lips, my big tits , my round ass and that satin dress caressing my soft skin! How could you not want to goon for me and "cheat" on her?

Sometimes such days come when girls have a desire to dominate and when they want to throw out all the accumulated negative energy. Such a day came to our area and one poor guy got screwed.Lola, Elly and Avril are a dream team specially trained to kick some ass. Fight for a breath and lovely asses on his face.

Posted on: 2022/09/22
Keywords: Facesitting, Facesitting Clips, DuneFeet, Sometimes such days come when, Elly and Avril are a dream te

Missy Van Licks, Carmen Rivera and I are in the forest looking for polluters and we don't have to look far. Someone actually dares to piss in the forest and pollute it. The only ones who may spread their piss in the forest are us! Without further ado, we overpower the sinner, cross-examine him and explain to him what punishment awaits him. We undress the sinner and tie him to the tree on which he has just pissed without permission. Naked and restrained he is completely at our mercy and will now work off his punishment with us... (Part 1 of 5 of the full clip " Sinner spotted in the forest, fucked and fisted")

Adelina Sapphire takes a smoke break. She sits on the slave's belly on her knees with her full weight (52kg / 115lbs) and smokes a cigarette. Adelina Sapphire puts hot ash on Alex's tongue and makes him swallow it. She loves to dominate the slave with her full weight as well as uses him as a living ashtray and a trashbin. When Adelina Sapphire is finished, she extinguish a smoldering cigarette butt on the slave's tongue and makes him swallow it. Then she checks Alex's mouth very carefully to be sure, that he is really swallows everything... and you can be sure too, because this video with [PoS] Clip with Proof of Swallowing (special camera angle / without cut in specific scenes).Duration: 5min 25sec

Lady Pascal wants to change her left boot now and the slave is ordered to help her putting on an extreme domininant looking overknee leather boot. He must close the lacing and he really becomes horny beeing to close to his leather goddess.And now, count the eyelets of my boot!, Lady Pascal commends with a davlish smile on her face. The slave tries to count them but the mean Mistress pulls away her leg and kicks it against him. He has no chance to count the right number. What a loser, isn't he?So he is ordered to lick the boots again, from the heel up to the Lady's legs. To make him doing a good job, Lady Pascal steps on his hands with her boots. The slave moans in pain but that's just the beginning. Now the leather queen presses her spiked heels into his hands and now he really feels her power.

This is the Casting clip of Lorelei. It's the first time ever this beautiful black girl tramples a man. At the end of the clip a very interesting short interview in which you'll discover her feeling and impressions!

Missy Van Licks, Carmen Rivera and I are in the forest looking for polluters and we don't have to look far. Someone actually dares to piss in the forest and pollute it. The only ones who may spread their piss in the forest are us! Without further ado, we overpower the sinner, cross-examine him and explain to him what punishment awaits him. We undress the sinner and tie him to the tree on which he has just pissed without permission. Naked and restrained he is completely at our mercy and will now work off his punishment with us... (Part 1 of 5 of the full clip Sinner spotted in the forest, fucked and fisted)

During a walk in the woods my over the knee boots have become really dirty. This is not proper for a lady, so I demand my slave clean my shoes with his tongue. Suck all the dirt and mud from my boots! I want to see not even a crumb of dirt on them! While he diligently cleans with his tongue, I spend the time with a cigarette. Mouth open - you have to swallow my ash too!

CANDID SOLESsexy soles and beautiful hard rough bare heels of our barefoot runner. she is tired and needs a break. come closer and admire those amazing soles!! 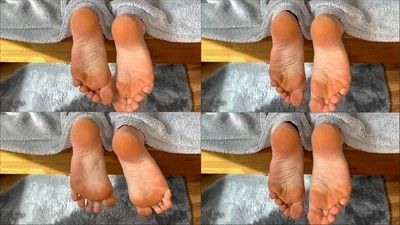 Oh, this time was really hard and painful trample for My carpet cuz his chest was totally covered with bruises and abrasions after some previous hard trample actions, so he even dared to resist a couple of times, which really made Me angry, I hate disobedience!There are jumping and kicking actions, face kicks and full weight marching, full weight throat standing.