He picked them out himself and said that he will take any amount of pain for them. The girl stands in one place for a long time to leave the deepest marks possible on him. She has dirty heels because the shoes she was wearing left marks. She steps on him as she pleases, often standing on his head.Then she starts to walk on his back. She tries to smash his moles with her heels.

Two girls support the side of his face with their shoes, so that he won't tilt his head and the others stand on his face in sneakers. They are supposed to stand for a few moments before getting off. Time: 8.15 min.

Year 2002 - One day my friend came and he was talking a long time about his tolerance of trampling. So I invited one girl (Anna - 62 kg. ) who exactly knew how to exceed this barrier. Then he was resting a whole week... Time: 9.45 min. 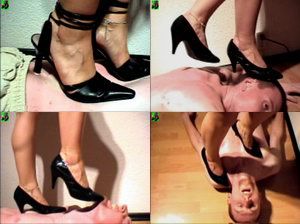 Today I'll have to do some work on my laptop, but I'm really not in the mood. Maybe my slave can do something about it and brighten up my mood a bit, when I use him as my fall guy during work. Therefor I tie him on the floor and spit on his face several times. He's looking so disgusting, eww! For once he's quiet and well behaved because he knows that otherwise my mood would cause him a far worse punishment and pain. But somehow his view is just too pitiful while I humiliate him. Stupid skunk.

Jamie-Kate gets back at this loser and bounces all over him. She wanted a new couch - but he didn't get her one yet. Now he has to suffer! She bound him to the gutter and punishes him with facesitting. She got no new couch - so his face will be it for now ... bad luck for him!

Sexy asian goddess MISS VANNY orders you on the floor because she wants to trample and crush you under her sexy black boots. She want to kick your face and to squish you nose under them before she will stand full weight with both feet on your face !!

The next Polish city that I visited was Katowice. It was a BDSM party, but I chose to do my thing and was warmly welcomed as something unique in this area. Only one person had done trampling before, the rest really wanted to try it. 52 girls trampled me in this video. One girl liked it so much that she didnÂt want to get off for three minutes and was sticking her heels into me. There is also a scene where a girl sat on top of me, thinking that I was some king of material and she was having a drink, when other girls took her off me. The film was shot with two cameras. One was placed behind my head, the other was under the stairs. Time: 22.49 min.

A girl tramples ten eggs on the guy's stomach. The film additionally has slow motion sequences shot with three different cameras, where you can see the eggs falling apart. At the end it shows the eggs being crushed at normal speed. Time: 12.12 min.

You are at the right place at the right time, because Mistress Zora needs a loser to lick her shoes clean right NOW! So a submissive foot slave like YOU is exactly what is needed! Come on, get straight to your work and lick her sneakers clean from top to bottom! Don't forget to thoroughly clean the soles too. Your tongue must do a good job so that Mistress Zora is satisfied with the result. Can you do that?! Then prove yourself NOW!

Sexy Lady Marinka want to relax on the bed and she allows her footslave to take off her silver heels and to worship her sexy goddess like feet. Enjoy the time at her feet lucky man.

Now it's time for the slave to smell her Mistress' panties. Mistress Roxana sits her ass right on her slave's face and makes her smell them. She should deeply internalize the smell of her mistress and never forget it again. Mistress Roxana doesn't let up and orders her slave to inhale again and again while she is stuck between the Mistress' legs without any chance of escape.

Lady Amy and Princess Serena love to destroy their slaves. For this loser, they have teamed up to put him through his paces! They kick him again and again in the stomach with their high and sharp heels. Then they pull him back towards them with a rope and kick him again. Lady Amy kicks him once to his loser balls so hard that he goes to the ground. Then the brutality continues! From both sides the mistresses now rain further strong kicks into his belly with no let up. Princess Serena and Lady Amy could go on like this forever. But how long can the slave endure?

89963 - Jamie-Kate punishes the loser with facesitting

The tiny loser has to smell Jamie-Kate's ass today! He has no chance to escape or defend himself because he is bound to a stool and cannot move anymore! And Jamie-Kate already sits at him! She punches him, spits at him - and of course humiliates him too! But this whiner shall stop making a fuss now! He is such a loser...!

This really greedy lame duck is at my feet again. I can almost taste his fear... on the one hand he's horny by watching my hot ass and pussy and wants to feel their shape on his face, but on the other hand he knows exactly that nothing's for free. I sit down on his face, wearing a sexy fishnet pantyhose and keep his mouth shut between my ass cheeks. He has to inhale the tasty scent of my ass... I've put on that extra smelly panties for him - if he likes it or not! But to be honest... even if he's moaning beneath the heat of my pussy, he surely likes it! My pussy makes them want more ;-). Therefore I turn around and push my pussy hard against his respiratory ducts!

Mistress Vanny steals the breath of the loser! She presses her hands firmly over his mouth and nose and sits on his neck. He shouldn't have the slightest chance of breathing even a little. By all means possible she prevents his breathing and he is helplessly at her mercy. That's the way the rules are with Mistress Vanny! Only she determines what the slave is and isn't allowed to do. Now he may not breathe any more! For how long? Have a look!

Breathing below Hocica's ass is a very short pleasure only! After all he is supposed to smell her ass! Because if you are not a nice guy - you have to be punished of course...!

He's now her Pony - just like mistress Annabell decided. He should feel honored to be her pony and being allowed to carry his mistress on his back. She uses the crop on his ass frequently to motivate him even more. But mistress Annabell isn't very satisfied with her pony as it isn't able to carry her weight for a long time. Of course Annabell continues to ride him even after he broke down under her!

Sexy Sue S. has bound this loser to the training bench. Now she sits right at him and squeezes the breath out of his lungs! She rests on his mouth and his nose with her full weight - and hurts him very much this way! Now she can completely control his breathing abilities! Ever since now this guy will understand that he has nothing to say! He just has to do whatever Sue orders him to do... and nothing else!!

Lady Sara was out running and her feet stink intensely now. They are all wet in their shoes and the smell is clearly noticeable. Furthermore, the shoes have become very dirty from running. You suspect it already, but this is your task now. Lick her shoe soles clean and smell the stinking odour of her sweaty feet! YOU lick everything clean with your tongue now and work hard at it! Lady Sara wants to have clean shoes again! Get your tongue into the grooves and eat up every dirty little thing you find there. Work hard, loser!