Mistress Nikki is waiting for a few friends to come over - of course all mature ladies like she is. Her slave is going to be their carpet for the afternoon. She starts sitting on the couch, puncturing his body with her high heeled boots. To test his strength and stability she later stands up and tramples him with her boots and later on with her bare feet.

I have you trained so well.. down on the floor on your knees begging me to take ur money.. Your cock is so hard & the only relief you have is once you surrender to me.. So lets max out that credit card.. I'm going to drain your wallet & your cock at the exact same time. HA HA

Matt is a complete sexual reject. He was a virgin until the ripe old age of 29 when he lost his virginity to a prostitute. Guess how long it lasted? Less time than it took you to read this sentence. Matt is so pathetic and shy around women that the only type of attention he can really get from them is when he pays for it, just like with this clip. Watch me mock and tease Matt for being the sad loser he is with lots of sexy up skirts and brutal verbal humiliation. 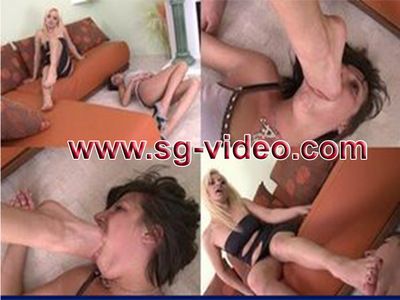 Three girls Teodora, Nicolina and Joss said welcome to one guy in this lovely white room. Three pairs of pretty feet and faces like the angels have fun and trample this looser. It must be just like living in Paradise. Scissorhold on Heaven's bed.

Lady B tortures a Teddy with her smelly feet after her workout. She tramples him, clean her dirty soles on the face from the Teddy. She press him her smelly Sneakers on her nose. She do the same with her old Crocs . You see some scenes from the perspective of the poor Teddy.

Jackie was mad at this loser because he was late for the appointment so she wants to give him a punishment! My time is really precious so you'll have to pay for my time lost! She makes him bow down on his knees to lick the dirty bottom of her shoes with his tongue! She did a lots of parties recently so they need to be prefectly cleaned! Jackie also takes her shoes off to cover his face with her smelly bare feet! They were kind of sweaty and dirty so she makes him lick and smell the bottom of her soles! She also wants him to sniff and lick the inside of her shoes! This is where my foot was all day long so lick it and taste my delicious sweat! Jackie also stands up to make him suck her toes in a doggy style position! He must take her foot really deep into his mouth! Five toes at a time! Very Hot Clip Alert!

My birthday is coming up soon ! This is not just any ordinary day , it is the most important day of your life. By buying this clip you agree ! Because I want everyone to watch this incredibly seductive video, I decided to offer it for a sensational price. 1 hour seductive Lizz La Reign power for only 29,99 ? ! I will explain my amazon wishlist in detail. I will show you what gifts are really important to me and what I expect from each of you. You are my slave army spread across Europe. Each of you will max out his credit card for my birthday. Make my birthday a powertrip ! My powertrip ! I order every clipbuyers to buy this clip. NOW !!!

A lot of people would give all they have to be able to serve Goddess Victoria in this order. That is why Her slave is giving his maximum effort to make sure he is not replaced by someone else. His advantage is big, fat tongue which he uses devotedly and brilliantly. Goddess Victoria loves to feel that much needed enthusiasm on her boots and tired feet!

IN THIS SERIES FACE SITTING MAKES THE JUDGEMENT!!!"DO YOU BEHAVED YOURSELF? "SOUNDS THE QUESTION TIME-TO-TIME,AND YES JUST A FEW COULD BEHAVED! !DONT MISS THIS NEW EUROPEAN FETISH MOVIES DONE BY EMILIO HUNTER 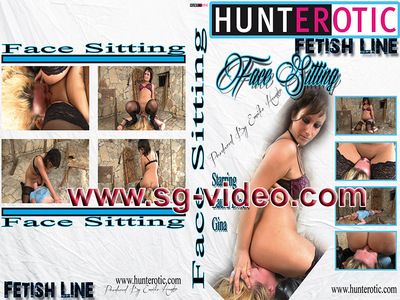 Miss Nikki & Her Sister Miss Vikki were nice enough to let us film a private session They had w/Their slave-girl. They call Her loser & make Her repeat things like, "i Love You Miss Vikki" & "i am a pathetic loser".Nikki's been wearing those flats all day so Her feet stink, but slave-girl has to kiss them & reply "Yes Ma'am" to everything the cruel Sisters make Her do. Vikki has slavegirl remove Her sandals so that She can fuck slavegirl's mouth w/Her foot while both Sisters laugh..Strong stomach is needed to watch this poor slave-girl be treated like yesterday's trash.

Sahara Dream is a professional belly dancer. Well, I thought it was very interesting to mix our respective ability. So, I asked her to try belly dancing on my abs. In the first part of the video, you?ll see Sahara Dream dancing barefoot on my belly (145 lb.). Then she wears a pair of shoes with heels and the belly dancing can go on. I simply adore the contamination among arts. 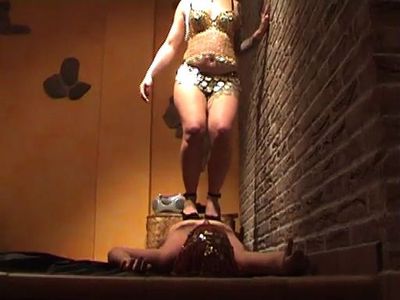 Which slave does not dream of having his mistress to experience a frivolous walk in the woods. In this special "Point of View" - clip you get the chance just to slip into this role and get a small idea of ​​what it means. Let yourself fall into the roles and have fun while watching the video. And who knows, maybe you'll get a yes day also this chance with me?

Two iron fakirs and one giant kickboxer (six feet tall): these are the ingredients of this performance of stomach demolition. In the first minute of the video the young giantess stomps with full power the two fakirs to take their breath away (when a big foot - 7,5 size - stomps your stomach and solar plexus - there's no way to take a breath, even if you stiffen the abs). After this terrific warm-up the beautiful giantess tramples the fakirs, standing full weight on their stomach for five minutes. At the conclusion of this performance, the most extreme jumping scene ever filmed: the kickboxer jumps from the highest rung of a ladder and lands heavily (163 lb.) onto the stomach of Fakir Ab, the fakir with invincible abs. Belly trampling, stomping and jumping to the maximum degree! 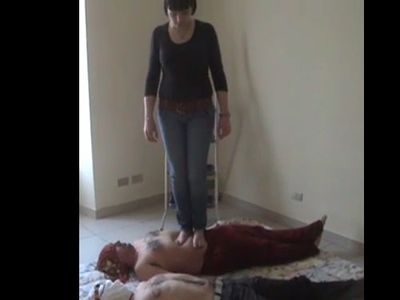 "So this segment we're video taping to show the class. We're doing a project on sweat and dirt. So we're going to ask the retard here, to lick my shoe...lick the shoe!" she says telling him it's in the name of science! She can barely contain herself from laughing as she films the retard licking the bottom of her shoe! Kaylee tells him he'll soon learn to love it and to keep going!

He complains no longer wishing to be her partner! Unfortunately he has no say in the matter. Now she's ready to move on to phase 2, sweat! She removes her shoe holding her barefoot over his face! "Now I need you to lick my foot!" she tells him while asking him how it tastes and if it's salty!

"Wow, I can't believe you're doing this. The class is going to love this!" she says in a soft sexy tone! Kaylee removes both shoes placing both feet up on his face as she continues taking notes while he licks her barefeet!

She has him taste different parts of the foot as well! "So does the arch taste the same as the heal?" she says, asking him to check again! "And my toes, do you taste nail polish?" she wonders while he's now sucking on her toes! Retarded Boy begins feeling abused! She won't let him up, keeping him pinned beneath her feet all in the name of science!

Once the project is finally done she stands up and tramples him while wiping her feet across his body like a human mat to get his 'retard slobber' off her feet as she goes "eww!" 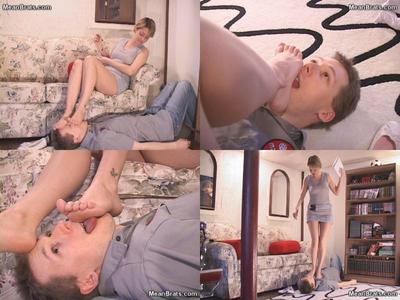 The devilishly beautiful lady in red latex teaches the newcomer to 3 SM steps, what it means to suffer for it. It begins with bondage, smothering, ballbusting, scratching and nipple torture. To the slave lying on the ground and pierce the paragraphs in his back, he can stand the lashes of his mistress.

39037 - Observed and Punished by the Mistress with the Leathergloves

He has no idea that Lady Vampira him secretly with a camera on his maid service and the punishment to observed. The slave gets slapped with the long leather gloves and Bootkicks. What he hadn't anticipated that the strict Domina with his camera, and his education records secretly now!