Arrogant Mistress Jenna rubs her pussy and ass on his face. She loves to rides her victims face and she wants him to sniff it. Furthermore she smothers him under her ass and plays with his breathing. If you love a sexy Facesitting session, this Video is a MUST HAVE!

Four girls are in the coffee. Sunny winter day, great for the chat and fun. Smallest one, Kacie, is loudest and always ready for mistreat. Three six feet tall girls Candy, Aurora and Hadley are dressed in jeans and have fun over her. They shot her mouth with their asses. She tries to escape but they don't let her go.

The wooden floor is way too cold to stand on it without shoes - I like my feet to be warm all the time. That's why my slave's going to be my floor while I'm doing the dishes. Of course I take my time to torture him in between - by standing on his face and head or jumping on him!

The girls compete who can have more saliva over a certain period of time. Such beautiful white and delicious saliva derives from the lips of beautiful girls

I made it very clear to the slave after my last hiking trip - he was supposed to lick the dirty soles clean! But when I grabbed them today I saw the soles are still covered with dirt - obviously I can't tolerate this laziness! I put the slave into the facetrampling box and start to walk over his face with the dirty hiking boots. The deep tread surely hurts him a lot - but that's not my problem - I wouldn't punish him this way if he did like I told him! I'm walking over his face again and again and make him lick the dirty boot soles in between until the soles are clean again and I think he has experienced enough pain as a punishment. I included a short POV scene in the end to give you a good closeup of the boot's brutal tread!

Better watch out, piggie - this clip will kill you! My sweet voice and my beauty is just too much - you turn immediately to a helpless, head banged payslut. You are a lot older than me but without a chance; I am too pretty, too clever and I realy know how a loser like you has to be treatend. As a second class sub it's your job to work hard making my life even more comfortable! 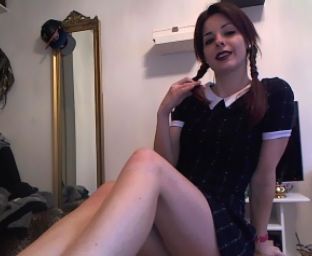 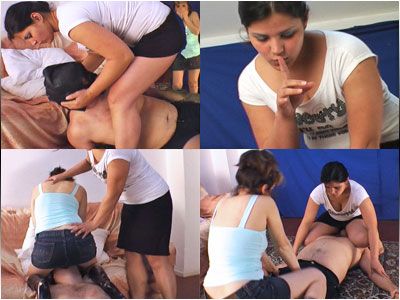 Rafaella also heard about our sweaty socks challenge by one of her good friend on the site and it seems like she really wanted to give it a try! She has been wearing the same pair of grey thin ankle socks for a full week at work, and this loser slave will now have to deal with her sweaty socks and feet in his face for the next two hours if he wants to win this challenge! If he canât do it? Sheâll get the two hundred dollar bonus in cash! She is also coming back from a very long working day with her socked feet inside her sneakers, so for sure itâs not gonna be an easy task! She was really planning to totally enjoy that relaxing session on the couch with her sweaty feet on his face, and I am not the one who will blame her! Dreamgirls just deserve the best!Rafaella just makes sure the rules are clear, before she gives him the call to take her sneakers off, then immediately covers his face with her sweaty grey socks! Her cruel smile of satisfaction can easily tell thatâs itâs not gonna be an easy task! The smell was really strong, and really intense, but she just makes fun at him and rubs her sweaty socks all over his face! She makes him take some deep breaths in her socks, and makes him lick the dirty bottom of her socks! She also asks for a nice foot massage, and makes him tell that he really enjoys to have her sweaty feet on his face. It was really humiliating. Rafaella also makes him peels her socks off with his teeth, and just pushes both of her socks inside his mouth with her toes. She wants him to wash them! She takes pleasure again to rub her sweaty naked feet all over his face while watching her favorite TV show. She makes him sniff and lick the sweaty bottom of her soles, and just enjoys that first experience of owning a footslave! That was just another amazing first foot fetish experience!

Lady Vampira used their slaves in part 3 of the Pin Up Party for extreme trampling and foot stool! Sadistic High Heel dominance with Handtrampling for training as human Furniture

Our old trully fans remember our first slave guy called Mitja. He went in retirement on few years and he heard for our new great girls on the site. He wished to break his rest and to be broken by our girls Sibilla and JJ. Butt drops. The girls jump high and land hard on his belly.

Ms Fatale has a way of looking down on men that just makes you want to kneel to her. Being down on your hands and knees, kissing her feet, just feels completely appropriate. While he grovels like this to her, she sneers, treads down on him, grinds his face into the floor under her divine foot. She has a wonderfully aristocratic way about her, and clearly loves putting men in their place. Lots of verbal humiliation, domination, trample and worship in this series.

Check out Sarah's super sexy hard platform shoes, these are white platform stripper shoes watch this girl step all over her victim crushing & trampling his stomach & chest whilst enjoying her drink, Mark suffers & squirms under her as she wears her black underwear & sexy stripper platform shoes.

Like all of our girls Adalyn is no exception! We have found ourselves yet another incredible girl! She gets into the trample fetish fast! She starts stepping on his face, doing the twist, dances, mocks him, jumps around, and even BOUNCES ON HIS THROAT all while having a LOT of fun!

For her first experience she's far from shy, we were a little surprised! She wouldn't keep still on him for a second! The more he grunted in pain the more she'd jump around and the more she'd giggle about it!

The best part comes when she steps one foot on his stomach and one foot on his throat and begins bouncing while singing her own little french song! "Tes un hypocrite! Stupide Anglais! Cretins! Imbicile! Idiot! Face de pete! Tien! Tien! Pour toi! Dans ta face!" she chants while bouncing on his throat to the rythm!

Even after causing all that damage to him she still wasn't done trampling him! After the scene was done she asked if she could try standing on his head! What girl asks a question like that during her FIRST experience? She's completely sadistic! So up she goes standing fullweight with both feet on his head while showing off a few good VICTORY POSES to the camera!

ADALYN'S INCREDIBLE! THIS ONE GOES DOWN AS ONE OF OUR FAVORITE 'FIRST TRAMPLING EXPERIENCE CLIPS'! BE SURE TO CONTINUE VIEWING THE CLIP EVEN AFTER THE FINAL CREDITS! THAT'S WHERE YOU'LL FIND THE BONUS 'HEAD TRAMPLE' SCENE WITH THE VICTORY POSES! SHE'S AN EVIL ONE! 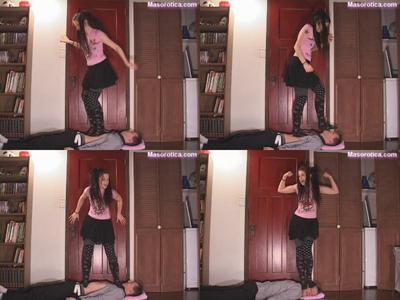 She is tall, beautiful, and she has the longest second finger on her legs, which makes her special. Today she handcuffed this pig, threw him on the floor and began to simply water the insignificant slave with a huge amount of white saliva. She spit on his face, just smeared her saliva on the face of this bastard, who only can take the saliva of his Mistress. This bitch just lay on the floor and mooed until his mug became dirty, smelly, and he could not do anything.

Mistress Lydie orders her slave has to lick her splendid high heeled boots, she makes him suck her heels, lick her disgusting soles and orders him almost to entirely swallow the point of her boot.

Every day a new clip surprise for my slaves until Christmas Eve. Enjoy 24 days in a row something special.The clips include the following fetishes: Tit WorshipAss WorshipJOISmoking FetishCEIHumiliationNylonsSocksFeetFemDomFinancial Domination BlackmailTease and DenialAs well as some extra which you can win by buying every clip until Christmas Eve.

Mistress Lydie read a book while her slave lick clean her dirty shoes's soles, she then take off her shoes and use the face of the slave like a footstool for her stinky stocking feet.

I've been working at the Mall as a Santa's Girl for a local Charity that I support & my feet have been sweating inside my boots for HOURS.. So get under them BITCH!.. Was that YOU at the Mall today?.. I Saw You.. You were that fucking perv with the big bulge in your pants!.. lol.. You were staring at my boots & drooling with a boner in your pants.. You couldn't take your eyes off my feet!.. I KNOW that was YOU!.. HA HA FREAK!.. lol

Jovana, the scientist and specialist in human cloning, has in rented apartment in the other country, far away from her home. In hot room, just in white underwear, she enjoys in holiday. Suddenly, she received an order to eliminate all clones of one girl cause her project is in danger. She has enough time to take away the lifes out from all clones. But she has a weight fetish and she likes to eliminate them on her sadistic way under her 76 kilos. To be more interesting, she has a pervert boyfriend in her country who waits for her and they talk over the cell phone every day. While she slowly k1lls the clones, she talks with him and makes him horny. She talks to him what she doing in details and how she eliminates the small girls. Like a hot line. The clones are called Bambina and they are submissive and listen all what she said. ENGLISH language. Jovana sits comfortably on the face of "Bambina 3" and talks with her darling. Third clone has smothered under her ass. THIS IS A FICTION, NOT REAL DEATH!!!