85001 - Extreme facesitting and ballbusting by 2 mistresses!

Here, my girlfriend, beauty-of-pain, and I have a slave, extremely used! We put the tail and the slaves' eggs in a peniscand and tied them. So that its eggs and its tail nicely thick swelling. Then the slave had to lie down on the ground and we did a facesitting with him alternately, so that he did not get any more air and he had the divine scent of our holes in his nose. As I sat on the slaves 'face, Betty stepped against the slaves' thick balls. The slave whimpered under my ass and under the feet of Betty. Then Betty took a basball bat and worked with this the swollen eggs of the slave. According to the motto: Sweet sound the bells! Lol! The slave yelped and whimpered even more!

Look at this old perv. This guy always sneaks around us staring at our shoes and feet. This time he comes over asking us if we would allow him to worship our shoes and feet. Ok why not? Of course this aint for free. We play these games our own way that means slave has to give us money, then he is allowed to kiss our shoes. Slave has to give more money then he is allowed to continue kissing our shoes. We played that game for quite a while which meant that the slave lost some hundred Euros that evening. LOL.

after the previous exertions I treat my slave to a little relaxation. He is fixed by me on my bed by his arms and then once again he gets tickled. I have intentionally not tied his legs. Just gorgeous as he struggles uncontrolled. But there is no escape

Liberty loves to dominate and she loves to take advantage of this loser slave after dancing all night in her shoes! She makes him bow down on his knees like a toy to serve and obey her commands! She first makes him take her shoes off to take some deep breaths in her shoes! I want you to smell my sweat and tell me that you like it! Liberty also covers his face with her smelly bare feet and rub them all over his face! What a great feeling to deposit my sweat on your face! She makes him stick his tongue out to lick the bottom of her soles just to give them a refresh! She also likes to watch him suck on her toes after they had sweated for eleven hours in her shoes! What a Mean Sex Bomb! Hot Clip!

Its stime for a good morning session... Lady Kitty wants him to smell her sweaty pussy through her panty during a facesitting session and she orders him to sniff her ass... She loves to ride male face under her pussy and under her ass. he enjoys to sniff the smell of the whole night!

This is the second episode of the so-called ''Abs of Steel Challenge'', in which the challengers beat to be able to bear Giadina's heavy weight for over six consecutive minutes always on the same body part, of course belly and stomach: two minutes in trail running shoes with hard plastic spikes, two minutes in socks and, finally, two minutes bare feet. This time the challenger is ''Mobilio'' (the italian name for ''Human Furniture'': he simply adores to become an object under the foot of a beautiful young girl). Will the old Mobilio be able to win the match or the shortness of breath will oblige him to clap on the floor in surrender? If you like never ending abdominal pain and heavy stomach trampling (no tricks, no camera cuts in this live performance), this clip is for you! 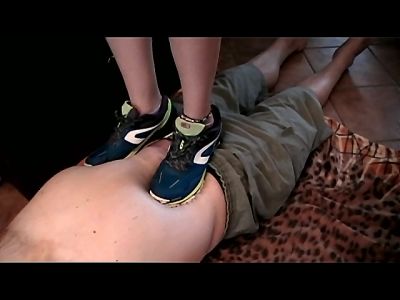 Sometimes you just have to tie him down and make him have it. This is just what Goddess Chleo doe in this scene, straps him down so he's helpless, then has her way with him. Lots of foot smothering, face sitting and trample as Goddess Cleo enjoys dominating him. Lovely scenes as she orders him take her stocking off and he submits at her beautiful feet. The domination chair becomes a throne for Goddess Cleo, who wouldn't dream of being her slave?

In this clip I team up with Madison and Virginia - and we're starting off by trampling the slave under our sneakers. We walk, stomp and jump all over his body and make sure to hurt him badly. Madison even takes Virginia on her back to trample the slave under both their weight :-D After a while we take off the shoes and continue to trample this loser under our bare feet. Of course we continue to trample him hard, stand on his head and throat, jump on him and dig our feet into his stomach!

Sibilla and JJ are SWAT agents who are sent to interrogate one guy. Instead of interogation, they use him for fun and their sick desires. Two great girls, together, made their ways to fetish Heaven. Strange ways to squeeze his head in scissorhold.

After i went to the toilet i found this jerk directly in front of the stall - guess he watched me on the toilet? Fucking perv - he had it coming - i drag him into the stall and force his weak body down on the ground! So he likes the stuff that goes into the toilet? Maybe there's some left on the toilet? I start rubbing all over the toilet bowl and seat with my converse shoes and make him lick them! Now tell me, you still like it? After some time i get rid off the shoes and continue with my bare feet - while i'm standing on the toilet and he is lying in front of it i'm making him lick my feet completely clean! Guess next time he won't peep on any girls on the toilet!

Bruce, I saw you the other night. I saw you sucking on Robin's cock. I know you guys are a couple of fags, that explains why you never look at my hot body, no matter how often I hang around the batcave. Well guess what, Bruce? I have my own huge cock, and if you don't want to fuck me because I'm a hot girl, I'm going to MAKE you suck my big cock and admit how gay you are. Come on Batman, suck on Batgirl's big cock.

The slave has to be available for my girlfriends and Lady Missy needs a slave for cleaning her garden house. He has to clean firstly the stove and Lady Missy beats him with something which are lying around and humiliates him. Quite a lot dirty he has to clean with a brush. Lady Missy is very strictly today.

An angry woman runs into a hotel, starts cursing at the receptionist, and beats him with a whip. The receptionist starts to run, enters a room and trips on the floor. The woman kicks him and he stops talking. She ties him up. A hotel guest tries to defend the man, but he also gets tied up. The woman slaps him on the face a few times. Next, she ties his hands and starts to whip the man, who is kneeling. She takes off his pants and starts whipping his ass she starts to kick him in the stomach really hard. She makes him lie by the wall and steps on him in very sharp heels and starts to whip him. He is left with marks all over his body.

Get over here, loser! Watch closely as I pour some food for you out of the trash. Some good food, some spoiled food, some dirt and some ash - just the right mix for you :-D I top it off with some of my spit and then crush it under my converse soles - where you may eat it off :-D Come on! What are you waiting for? Get your tongue out and start licking! I speak some German in this clip - but it's easy to understand and the actions speaks for itself as usual ;-)

We arranged a simple game in our studio: whoever arrives last, must smell the stinky feet of all the other girls! Anna, Clarissa, Esther and Lorena was there in time, but Rosie was late, as she always is. So she had to take the place of the victim, she got her mouth taped, her hands tied and she had to submit her nose to the sweaty soles of 4 girls! They took of their shoes, neither one had socks within, so the stink unleashed was overwhelming. And from that very moment there was not a second chance for Rosie to breathe fresh air, the eight soles totally surronded her face, no matter which direction she tried to escape, they kept coming from all angles, totally burying her face underneath. Rosie had to inhale a mixture of four different footstinks, some cheesy, some vinegary but all reeking just too bad! And there was one extra kinky addition to her already unpleasant situation: Anna and Rosie never met before this scene! So Rosie's very first impression of her was the moment when she had to lie defenseless on the floor and let her push her smelly soles into her face with the aid of three other girls, while I was recording! How humiliating for her! After they had enough, they simply leave her there without a word, they don't care about releasing the poor girl at all.

I have a lot of fun torturing my slave. It starts with some ballbusting and whipping. Then I trample my slave under my 5 inch heels. I step on his cock, hands, stomach and even his head.