Alika finds herself a boy wrapped up like a caccoon! Instead of saving him, she has something else in mind! "You're like a worm I crush under..." Alika says sitting on the face of the squirming young boy! First she just smothers him, but what goes on under that skirt of hers later remains a mystery!

"Are you getting tired? You're not working hard enough! I'll grind your face into the ground!" she says wiggling her tushie back and forth over his face! He begins to squirm again making her giggle as she keeps him pinned under her skirt! "Come on! If you don't work harder I'll tell the queen to cut off your head!" she threatens! "And I'm going to sit on it, forever!"

WE SHOT THE CLIP AT A BAD ANGLE, SO THE PRICE HAS BEEN REDUCED! EVERYTHING TAKES PLACE UNDER ALIKA'S SKIRT, LEAVING IT TO THE IMAGINATION! 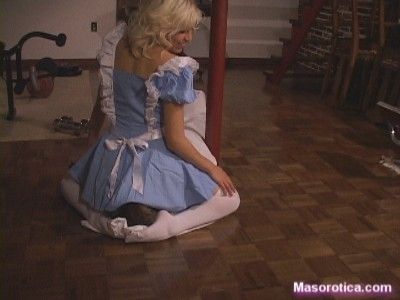 Latoya is a sexy girl and she likes to play with her girlfriend. Today she decides to sit down at her back with her hot jeans ass because it's time for a ride! Latoya places Attika with her head at the couch and takes a seat at her face. She presses her sexy jeans ass hard against her so Attika barely can breathe! But that doesn't matter because Latoya has so much fun riding her face! She changes the position here and there but something never changes: Her awesome ass perfectly fits at her head!

The Family Slave has to lick and adore Mothers and Daughter Shoes and after he is allowed to take em off their smelly nylon feet. Go, sniff mom's and daughters nylon soles and toes you born loser!

We had a mean idea - there's this German delicacy - called a Berliner - basically a sweet dough filled with marmalade - and we're giving it our own humiliating twist :-D We squeeze out some of the marmalade, then start to spit into a huge syringe. You can see the syringe filling up with our divine spit, then we squeeze the spit into the Berliner - and hand it to the slave. He eats his spit-filled snack and while he eats we continue to spit on it. Of course he also has to lick off all the spit from the plate as well! If you're into extreme spit domination you can't miss this video!

Felicia is coming back from a long business meeting downtown and it seems like she needs some attention on her feet after a couple of hours with her feet inside her high heels shoes! she makes her slave bow down on his knees, and she wants him to obey all of her instructions as a good loser slave! She first makes him take her shoes off, and she wants him to put his nose right in between her big toe, and her second toe! She wants him to take some deep breaths in her feet, and just enjoy the smell! Felicia also thinks that her feet should be cleaned so she makes him stick his tongue out to lick the sweaty bottom of her soles! She wants him to lick the bottom of her feet from heel to toes! She also wants to feel his wet tongue right in between each of her toes! Felicia also wants him to take some deep breaths inside her shoes so she just hold them on his face with her foot while he is taking some deep breaths inside her shoe! Another amazing clip!

well... our boy here seems to be very happy as his mistresses are away. usually he should clean the house, but as a shoe lover he founds it more interesting to spend attention to the shoes of his goddesses kissing them and worshipping them...but... unfortunately for him the mistresses jenna dee and lady chantal appear earlier as expected and are furious bout this misbehaviour that has to be punished of course! so he is ordered to lay his body over a small chair to get his ass in the air. then his ankles and hands are bound together with bondage tape. then its time for some whipping! both ladies take turns with the cat o nine tail, while the other lady puts her high heeled feet to the mouth of the slave for worshipping. so this punishment should make it quite clear for the slave brain that he is not allowed to misbehave and every lack of obidience will lead immediately to punishment and lots of pain! class a femdom clip!

The girls opened a club right now. They allowed only female members in it. Guys are welcome to serve and obey all their serpent wishes. "Serpent club" are Teodora, Britney and Bea. The guy obey under girls' feet and weight. They crush his face.

Do you want to see how i dominante my footslave? Im sure you like also to be under my sexy high heels, kissing my heels and barefeet! I will press my feet directly on your face and you have to lick and sniff them as long i want!

And we start our brandnew Series "CRUEL & HOT SADO BITCHES FROM HELL" with the ultra-sadistic and bossy High Class Lady :: CASSANDRA CASAL :: ! This Part is called !THE BOSS BITCH" and like the Name already says this one is a Special Clip with Office Fetish!! Wearing super-sexy Nylons, black High Heels and her beautiful elegant Corsage sadistic :: CASSANDRA CASAL :: is looking like the perfect Boss Bitch!! She is working on her Laptop and abusing her Slave as her human Furniture...! He has to lie under her Table while she is doing her Work very relaxed and snotty... He has to lick her beautiful Black High Heels clean at first... while she is controlling his Work with her utmost Attention very critically...! She then removes her sexy High Heels and is abusing her Slave as her Foot Table. She is pressing her ultra-sexy Feet onto his Head and later into his Mouth...! Now he must worship and lick every inch of her sexy Feet that are covered with Nylons... he must also smell the Scent of her beautiful well-shaped Feet! A lot of Human Furniture, Foot Sniffing, High Heels & Foot Fetish, Object Fetish and Trampling Action is included in this brandnew Killer-Clip...! Featuring the one and only beautiful Mistress :: CASSANDRA CASAL :: from Russia! 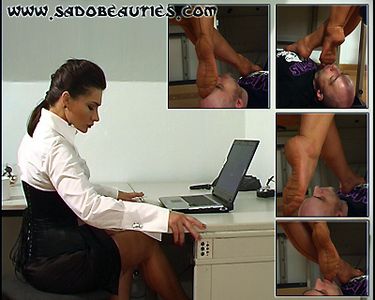 After the shoes cleaning, Mistress Catarina want her beautiful feet licked clean, she rubs them on the slave's face, gagg him hardly while she trample him. She is without pity for the poor slave under her divine feet.

He you i let you worship my whole sexy body. Kissing it, licking it all just because its you. So get really close to the screen and lick and kiss everything i allow you to. Just follow my simple instructions and worship me from head to toe. Today you are going to do something you wanted to do forever.

Lady Angela rubs her pussy and ass again on her slave face. He is ordered with a head on the stool and he sit full weight on his face and rides his nose

Vanessa ordered her slave to lie down under her couch again - but this time she just wants to have a comfy time. She just lies down on the couch and mostly ignores the slave's moaning. She freshens up her makeup, eats some sweets and checks her cell phone. She clearly doesn't give a shit about the slave's well being - he has to consider himself lucky to be allowed to serve this sexy 18 year-old princess.

Bonny and Sonny will get you surprised. New young girls, experienced in weird things, but for the first time behind the camera. Bonny, the black one, is dominate person in life who likes to dictate to the men. The red one, Sonny, is her girlfriend with strong arms and legs, ready to k1ll. Pure energy floats between these lovely girls. Bonny smothers him and humiliates him. Tiny ass but long tongue and great mistreatment.

Our new lady Ginger, lady Prinzzess and Lady Light in a really wicked spitting video. They spit all the time, and everything has to be slurp (smoking, spitting)by the slave. Pure spitting! Real delicious...

"You wanna be a little bitch between my ass cheeks? Wanna see between my ass crack? You wanna be my pathetic little chair?" Krystal asks taunting him! She lowers her ass on his face! "That's it that's all your good for! You're not good for anything else! I wouldn't even talk to you if you weren't my chair!""See I just sit on your face and I have you wrapped around my finger like the little bitch that you are! It's that easy!" she tells him. "I could make you do whatever I want now! RIGHT?" "Would you do my dishes?" "Do my laundry?" "Do my house?" "I'll make you clean my dirty panties with your tongue! hahaha Stupid little whore! I bet you'd like it too wouldn't you? Yeah! Lick that $hit clean! haha stupid bitch!"THIS IS BY FAR ONE OF THE BEST VERBAL HUMILIATION FACESITTING CLIPS WE HAVE EVER PRODUCED! KRYSTAL IS INCREDIBLE! HER VERBAL ASSAULTS ARE MERCILESS AND RELENTLESS! SHE'S EXTREMELY ABUSIVE BOTH PHYSICALLY AND VERBALLY! THE BEST PART IS KRYSTAL ACTUALLY MADE ME GO OVER TO HER HOUSE RIGHT AFTER THE SHOOT AND DO HER LAUNDRY, CLEAN HER DISHES, AND EVEN LICK HER OLD DIRTY PANTIES CLEAN IN HER HAMPER! I LOVE THIS GIRL! 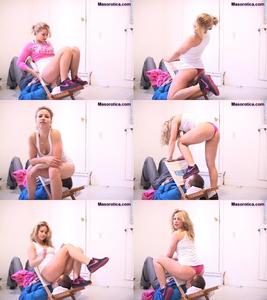 I want to have some fun - and obviously fun for me means pain for the slave! I step on his body with my boots and trample all over him. I walk back and forth on his chest and head, stomp on him and jump on him as well!