Iwona is preparing your dinner for tonight - she puts all kinds of stuff into your meal - really disgusting but yet enough for a slave ... EAT IT SLAVE ... EAT YOUR SLAVEDINNER!

59294 - Human face footstool and smelling domination after a long day

Mistress Lydie use the face of her slave like a footstool under her old sneakers while she relax at the pool side.the slave lick her sneakers and she then make him smell her sweaty and very stinky sock and feet. She gagg his mouth with her feet et rubs her feet all in his face.

This poor loser's HOT Roommate was the main cause of his groin injury in the first place & now seems to really enjoy constantly busting his injured nut & making it EVEN Worse - EVERY CHANCE she gets!!!.. Megan kicks his balls SEVERELY with her deadly pointy toe stiletto boots OVER & OVER AGAIN!.. We had to cut the video at one point when she busts it wide open - but that DOESN'T Stop Megan!!.. (she made him bandage up off camera) & then she does a HARD Running kick to it!.. Her boot gets him RIGHT in his bandaged up nut & it looks like she's going to kick it CLEAN OFF his body!!.. She makes him isolate his balls on top of a book for her to step on FULL WEIGHT with boots!!.. Then she takes off her boots & steps on them in fishnets & tries to POP this poor HYDRO Nut under her sexy fishnet stocking feet!!.. His nut looks like it's going to BURST under the PRESSURE!!!

Concentrated on my computer, I walked in something ! But in what ? , my clogs are dirty !! Fortunately, this idiot's head is there !! Crush face. Dirty clogs. Dirty soles. Facebusting. Human doormat... 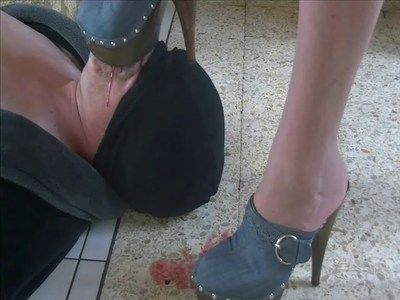 You have to do some serious digging to find 500+ lb women trampling nowadays. And most of what you'll find is very old. FWP pushes the envelope in the trampling world. In this video, Luna has her heaviest weigh-in on video. She then proceeds to smash Matt with her feet. We're talking serious full weight trampling on a hard surfaced floor.

You love me and you love me to finance my luxury!Â  I am the meaning of your life and you can not help but just to think of me, to make me happy and give me your hard-earned money while I humble you or you fuck your brains out.Â  But that's not enough you'll thank me!Â  Thanks I give your life a sense that there is thank me and I thank you ever noted the small number of my hooker!Â  What are you waiting for?Â  Video loading and bestow your lady! ... :)

Erina's really tall even without her high heels on (1,80m / 5'10") and the slave's really intimidated by her height when she approaches him wearing 10cm/4" heels! She steps on his naked chest without second thoughts and the slave moans in pain when the worn out heels hit his skin. She also slams her shoes on his face and threatens to step on his groin too while smiling down on the suffering slave. After a while she gets even more cruel and starts to step on his nipples with the heels to cause him maximum pain before she allows him to take off her shoes while she keeps standing on him. Without shoes it's easier to handle for the slave - at least until she starts stepping on his face and head with both feet and her full weight. He's in serious pain as his tall mistress slowly crushes his head but Erina just laughs at the "funny" face he makes and his moaning. She also makes him smell her sweaty feet in between!

Diana wants to try something new today. This shy beauty pinned down her girlfriend and wants to humiliate her on the bed. She sits down on Kitty's face again and again and rubs her jeans ass all over it. Kitty can't get away and her situation becomes totally escapeless as Diana binds her hands! Diana will repeat this session for sure as she had a lot of fun!

Tall 32 year old Alegra looks simply amazing when she approaches the slave who's already waiting for her. Her short red dress comforts her great body and the 12cm / 5 inch heels make her legs look even longer. She steps on the slave's naked chest without a second of hesitation and starts to dig the thin heels into his flesh. Unfortunately she can't keep her balance on the slave for long and orders him to take off her shoes after a few minutes. Now that she's trampling him without shoes she gets much more comfy and starts to trample his face and head as well. She also loves to jump on his stomach and steps on his head with her full weight a few times as well!

Mistress Lea and Mistress Sofia are importuned by a man. They massacres him under their ballerinas to teach him the good mannerss. They trample him, kicks and stomp him hardly and crushes his balls and face without any pity.

Mistress Lydie drinks wine at the edge of her swimming pool while its flunkey does the housework. She decides to stop him in his work to make him lick her high heeled shoes which are too dirty has its taste. Mistress Lydie takes pity for her slave nevertheless and decides to give him has to drink in her shoe, water is mixed with sweat and the filth of its feet but the slave is too thirsty to refuse this splendid offering. The slave must then lick the dirty and stinky feet of Mistress Lydie.

Janine has photo shootings regularly and wants to try some poses - while standing on her slave. She chose a pair of black laquer high heels with thin heels that make every step really painful for the slave. While she's changing positions she shifts her weight from left to right and from tips to heels all the time - standing on one foot with her full weight at lot of times. She also steps on the slave's head and face before she takes them off (without getting off him of course). She plants one of her heels right on his nose upside down and makes him smell the inside while pressing her bare foot on top. Now that she isn't wearing shoes anymore it's much easier for her to balance on his body and she steps on his face with her full weight all the time as well. She's a little pissed that this loser can't take it as long as she wants and she punishes him by stomping all over his body hard before she puts her high heels back on - of course also while still standing on him!

CINDY, the superb french Mistress, is chatting on the phone seated on her slave's face. She likes this dominant position over him as she finds it comfortable for her and humiliating for her slave as the same time. Being Cindy's slave brings a lot of humiliation and degradation. And being used as a pillow for her asses is part of the game if you want to be her slave.

23758 - Girlfriends Janine and Elaina trample together

Janine and Elaina never trampled a guy before, but today they're going to try it. The girls may look cute - but they're not going easy on their human carpet! They both step on his naked chest wearing high heels and dig their sharp heels into his skin. They try out different positions and trample the slave completely from his groin up to his head. Of course he's struggling under the combined weight of these sexy girls - but he isn't allowed to complain! Janine and Elaina get rid of their high heels after a while, but continue to trample him under their bare feet right away. Now the girls are feeling even more comfortable and even try jumping all over him. They not only step all over his body - they also love to rub their sweaty foot soles all over his face to humiliate him!

we are very proud and glad to present you today the first of the brandnew action series clips with empress victoria! in all these clips she will show her special cruelity and you will never see her so strong and strict as in these ones! trust us! we start with part one (of two) with her as a strict cruel drill officer. she calls her recruit first with a sharp voice. "recruit mÃ¼ller here as ordered" he says..."go down...i want to see, what you have learned so far...pushups! now! 10 and do them well..." soon the poor recruit gets exhausted, so its time for empress victorias cane to encourage him a lil bit... next she sits down on him while he is in starting position for the next dose of situps pressing him down... she humiliates him more when he has to kiss her boots. time for situps next. 10...20...with weight. and the poor recruit has to straigthen out his arms continuesly, even when not performing situps...she also adding some weight to his arms that are aching for sure already and burning like hell...what a cruel officer... ... to be continued in part 2!

The weather has started to warm up & Megan has one mean pair of hiking boots that she's been hitting the trails with & she can't wait to try them out on some poor slave's nuts!!.. "Look at these hiking boots.. their good for two things.. hiking in the mountains & kicking guys in the nuts!!" - Megan tells you!.. Then she completely destroys this poor loser's testicles!!.. She kicks him in the nuts with these Dangerous boots so incredibly HARD - OVER & OVER AGAIN!!.. Then Megan does a Running kick to his bare naked nuts with her hiking boots!!.. Megan even stands on his nuts FULL WEIGHT!!.. She shoves her smelly boots & dirty socks right in his face & finishes him off with a HARD Running barefoot kick to his bare naked nuts that leaves him down for the count!!!