You little slave feel sick? You need urgent medical attention and CONSISTENT treatment ? I think - I can help you. Contact me in my clinic. In a white coat and hot latex I will provide the patient already attached and find one or the other alternative treatment method.

When I have total control of your computer and camera, I can watch you, and fuck with you just for my pleasure and amusement. In this video I have a slave who is asleep at 6am, I decide to turn on the Mic to his computer and play some VERY LOUD Wagner to make sure he rises and shines in a hilarious manner, just to amuse me. Because that's what slaves are for, making me laugh!

You have a big weakness for my Ass even more when its covered in tight shiny fabric. Kneel down in front of my while i let you worship my jucy booty. No stroking allowed you will watch this and behave like a good worshipper. I tease and torment you with it, waving my ass in front off your face back and forth, squezzing it and even pulling those tight shiny pants down and torment you with my delicous ass crack. When im finished with you you will be begging for more like a good bottom bitch.

This is Sarah's camera angle this is what you see when she films down, Sarah is wearing her hot pink panties with a leopard print bra she sits all over her slaves face on the floor & films the action on another camera, her crotch & lovely legs are smothering him as his face is totally covered as Sarah sits comfortably on him.

Frodo-van-der-Nerd, a real young nerd, had written to me because he wanted to piss a woman into the mouth. He had never done that before. So I crouched, before the timid nerd, and waited for him, to pee me in my mouth. His bladder was full, but he could not piss with excitement. But because I had to pee and as punishment, I told him to lay down on the ground and then I pissed the nerd krass full. Take a look at his confused and clumsy face, which he is doing!

Candy and JJ were resolved to welcome the new guy. Lower growth and lean, he's one of the few who dare to embark on an adventure with the girls from DuneFeet. He was interrogated, the girls are studying its durability and introduced him to the world of domination. Candy and JJ trample him barefeet.

Famous Aqua and lovely Maddy are together in new adventures. We got a man specialy for them. To serves them, to enjoys in pain beneath them and to obeys whatever they want. Enjoy in these beauties. Great combination of facesitting and scissorhold.

Revenge of Kourtney. Last time, he didn't resist too much with Kourtney. This time, she call him again to finish her job. Cruel and sadistic cold bloooded girl, continues with her t0rment. She sits on his belly and arms and scratches helpless victeem on his chest. He screams too much, so she shots his mouth and scratches mercilesly.

This slave thinks he's capable of withstanding real pain. So I suggested a ballbusting session. He said he was excited at the prospect. It wasn't long before I changed his mind. As I begin kicking his balls, he's not so cocky (pun intended). I have him on the floor in no time. I order him to get up and remain standing. However, I think he is now regretting his boasting. Using alternate feet, I continue to kick his balls until he eventually slumps to the floor. What a Whimp!!

Liliana put Alex in very uncomfortable position. She tells the slave to put his head on the couch and his legs should stand on the floor. Then Liliana sits on Alex's face in her black thick pantyhose. Sometimes she stand up and gives the slave some air. After that Liliana put her legs on the slave and sit on his face with her full weight. Alex feels very bad because of his discomfortable position and full Liliana's weight on him, and also he can't breathe until Liliana's ass on his face.

Let's see how this slave performs as a human punching bag - I really want to do much harder kicking videos and therefore need someone who can endure it. I'm wearing skin-tight jeans and my Fila canvas sneakers and start off with a strong flying kick right away. It doesn't take long for the slave to get afraid of me and my powerful kicks - and he starts to flinch with every one of my moves :-D Obviously with the power of these kicks he can't keep standing - but at least he doesn't whine as easily and gets back on his feet quickly. Maybe - with the right amount of training - he'll be able to serve me as a kicking target more regularly!

Mistress Lea really likes to punish her slaves with her old riding boots. Today, she makes a slave lick the disgusting soles of its boots, crush his balls, choke him by crushing his throat, slaps him when he does not remove enough dirt with his tongue. She then punished it by trampling him without pity for its greater pleasure.

Sexy latex dominas, sexy boots and painful cries of the slave. He himself can't stand the game she plays with his balls, he thinks it's way too painful and would like to forgo it. That's true ball trampling! Can't be hard enough! 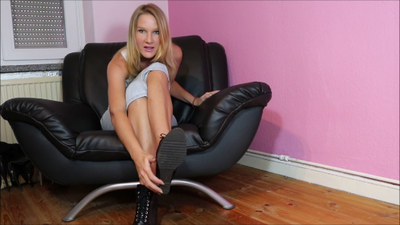 My pretty feet are the only thing you will be looking at for the next ten minutes......if my feet move, your gaze moves. You dont get to look at my face, you must prove yourself to me, show me that you are worthy of my time and attention.

Runa lies on the bed and cannot move. Her hands are tied up with two ropes and she is completely at the mercy of her girlfriend Maya Sue! Of course Maya doesn't wait long and takes advantage of the situation - and sits down on her! She smothers Runa with her sexy ass and prevents her from breathing. How long can she stand it...?

Today I needed to do a full manicure and pedicure! I cleaned my nail polish, I used a nail file, a special noisy machine with the sandpaper and the pumice. I cut my nails with a nail scissors and I polished it. Now my foot and hand are beautiful and fresh!