The video begins with Steve with his hands already bound tightly behind his back. He?s trying to open the door so he can escape, but Nikki enters and catches him. ?You?re my practice dummy! I get you for the rest of the night. The things I?m going to do to you?mmm. Trying to escape? That?s going to cost you!? she smiles at him. Nikki spins around in front of Steve to show off her hot body and tiny thong bikini. Steve tries to move away but that gets him a hair pull and a chokehold. Throwing him to the floor, she gets him into a close sleeper hold and nearly knocks him out. Then she schoolboy pins him and tells him that he should have escaped while he was able, because now she gets to have her way with him the entire evening. And that means scissors, pins, chokes, smothers and feet. Steve knows what it means, and tries desperately to give up, but Nikki doesn't let him go. Instead her fun and his pain begins ... !! Steve is caught into a tornado of holds and humiliation : front and reverse head-scissor, chokes, smother, facesitting, devastating reverse head-scissor and reverse head-figure 4, sleeper-hold, pins, head-lock, breast-smother, foot domination and foot humiliation !!! 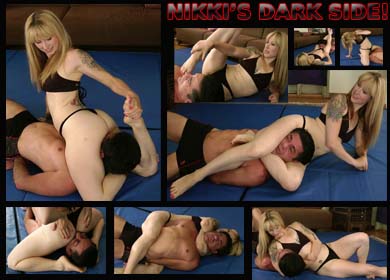 I love the humbler. It makes even the toughest of you bow down (literally) to my will! And I enjoy nothing more than getting you locked away in this humbler and making you my complete subbied out slut!I explain to you exactly what I will do to you when you are with me, as well as the delicious pain you will endure at my hands...

Snobby 'n cruel Miss Milano & Goddess Allison are lounging around in Their pajamas. They get Their giggling going by kicking this slave in the nuts & seeing that he likes it.Miss Milano does a variety of ballbusting-techniques, including Her trained Ballerina move, Ninja-style & a new technique of kneeing!*Includes bonus footage from the b-roll camera (Reality-Style! - MUST see!)

BigmommaKat has a special treat for you crush fans out there. She took it upon herself to put together an epic tale of thievery and punishment as she destroys all foes who dare cross her on her path to regain control of her tasty treats.At 600 lbs, you'd think no food would stand a chance against the beautiful and raw power of BigmommaKat, but she was up against solid adversaries with the likes of The Spike Boys (pineapples), her minions Spud and Dud (uncooked potatoes), Mellon (a large watermelon), the Pumpkin King's minions (small pumpkins), and the Pumpkin King (a large sized pumpkin).You'll see her terrorizing weight crush the foodlings into unregognizable blobs of mush while she tramples in bare feet, knee-highs, sandals, and heels. She also does some serious smashing and butt dropping.Awesome storyline. The most intense crushing power on the 'net. This is an instant classic in the crush arena!

Celine sits over the throat of a worthless Anglophone while continuously stepping on it's face and giving it the middle finger as it chokes beneath her weight! She doesn't get off until it passes-0ut!CELINE'S EDITION INCLUDES EXTRA 'TORTURE' SCENE AFTER CREDITS! 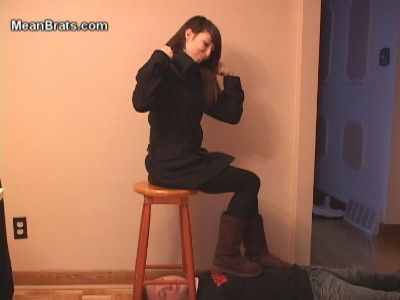 Me and Mistress Black Diamond have a session with three slaves. We start with some scissoring. We use lethal scissor skills to make our slaves match their place. Lateron we order the slaves to lay down on the floor in line so we can use them as a catwalk. It is not a secret that the slaves who work and suffer for us don't mean absolutely nothing to us so we walk all over their worthless bodies penetrating their skin with our needle-thin stilettos.*No scripted story REAL pro dommes in action*

I swear to you that you've definitely never seen something that's hotter than my hot butt in those unashamedly short hot pants! Sooo much insights into the world of upper-class girls... Designers were mean with the cloth and you're obviously thankful for that after you've seen my jeansass. But that's not all, at all... you're a lucky skunk that's about to get even more to be obsessed with - I pluck an even smallish piece of fabric from underneath my hot pants! It blows your mind into the next dimension, my addictive little boy...

Famous trio of cheerful young girls rule the world. Red Sonny, tall Britney and strong fighter Daria make their own rules. Their victeem is a guy catched in their spiderweb. Full weight facesitting, in turn.

Camille and Maika both like to dominate and make the rules all around so today was not an exception! This loser guy desperately comes at the office with his blank CV with the intention to get a job but it seems like the girls doesn?t really care about his past experiences! They make him bow down on his knees and he will now have to show how useful he could be at the office! The girls need to rest their feet after a long day at the office so they make him take their shoes off to completely cover his face with their sweaty nylon feet! Are you sure you still want to work here? You will have to take care of our feet every day! Those are the rules! Camille and Maika rubs their smelly nylon feet all over his face and just make fun at him! They also want him to stick his tongue out so they can make him lick their sweaty nylon feet! It is kind of funny when he must suck on Maika?s toes and sniff Camille?s toes at the same time! Not easy to deal with four feet in his face! This loser really need a job for now so he will probably have to take it! Even if he doesn?t get paid! Another Very Hot Clip Alert!

we are glad to present you a new mistress here - welcome kyra! dressed in an elegant waredrobe she wants to try out how hard she can hit YOU! "nice" as she is, she starting with a cat o nine tail. its soft at first sight, but if brought down with force and lash after lash it starts to hurt for sure.. but dont think its over then...cause YOU are going to get the caning of YOUR life. starting slowly kyra brings down the rattan with everything she has in her right arm. her blond long hairs are swinging and she is really beginning to sweat and has to breathe deeply. this is really hard stuff in virtual domination!!! not for the faint hearted virtual sub... 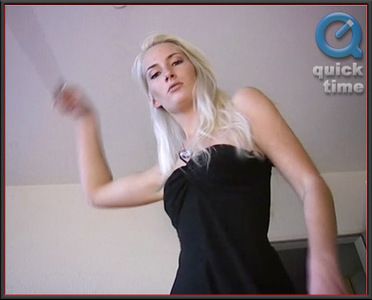 The Doctor will see you now. Be seated while we explore your inadequacy as a man, and discuss your sexual frustration. Don't be alarmed - I'm a professional. My demeanor and professional attitude are traits that you will find beyond reproach? Don't be frightened off by the reports of some of my patients - The ones that detect a subtle smile on Me during our sessions, a hint of amusement as I inform you that you are in fact quite inadequate as a male with your small penis and lack of sexual satisfaction.; a growing smirk as the session proceeds.As part of your therapy, we will need to have you masturbate in my presence. Although unorthodox, I open my white coat and allow you to view my breasts and panties during the session. The session ends with Dr. Fang allowing you release, but sternly advising you that you will require further sessions.

Snow white like a swan and dangerous like a lion. Her name is Swan, a new girl on our site. She doesn't except excuses and she likes to dominate in real life. Her first victeem is our small fat boy, a pervert professor. He will experience her anger. She uses the boots to choke a pig.

After outing my slave that he's lazy, he has to ly on the hard, cold bottom to serve as my facesitting victim! Usually he deserves something much worse but I think squeezing his face with my sexy jeans ass and taking his breath should be enough! What a fun! (Great POV!!!)

after a walk in the forest, The Mistress Maeva's shoes are realy dirty and full of mud, MaÃ®tresse MaÃ©va orders at the slave to lick them clean and to eat the mud. The slave is ordered to lick the disgusting soles over and over.

I can't believe how easily turned on you are by my feet... You dirty foot freak. Feeling a tingle in your boy shorts as you see my bare feet pointing at you? Wishing you were on your hands and knees like a little just licking away at all my toe fluff and sweat?There is power in even my little pinky toe where you are concerned. Silly little foot freak!

bekommt Richie wahrhaftig zu spÃ¼renSlave Richie must bear how Lea really crushes him with her Highs Heels; The young dominant girl tramples with her shoes on him around and drills him the heels into his slave meat, the imprints of it are branded open eternally so that he; There just is nothing more beautiful but to see a man suffering for Lea; And this gets to feel Richie really. 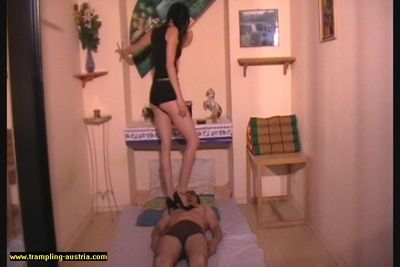