112199 - My doggy Brucie is a Chihuahua despite his appearance. The doggy doesn't need a doggy school, I educate him exactly the way I want him to be!

My doggy Brucie is a Chihuahua despite his appearance. The doggy doesn't need a doggy school, I educate him exactly the way I want him to be! Join Brucie in his training to become a model doggy and buy this clip.

You little useless loser really think you're a contributing member to society? That you're allowed to breathe the same air as other people? The same air as your mistress? Then you're terribly wrong! And for this very reason I'm going to smother you - under my hot ass! But I'll take my time and play with you for a while - and give you some ass air to breathe in between - but only for a short time, until I sit down hard again and seal off your breathing. How long can we play this game? And how long can I sit on your face until my sexy ass ends your miserable existence?! This is a non-exclusive custom clip for a fan. If you want me to do a custom clip for you, send me an email to marissa@madamemarissa.com!

Eva is a very beautiful girl with long and neat feet. She is sitting on a dresser and reading a magazine. Of course, something is missing for her ... For example, good foot worship. I sit at her feet and lick her beautiful soles. I licked every millimeter of her soles and would do it again. When I licked between her toes I felt the salty taste of sweat.

Cruel Lady B use a sweet toy Rabbit as a rag. She dips him into the pail filled with dishwater and put it on her dirty kitchen floor. She press it without mercy under her feet and clean the floor with him, again and again. She crush and trample the sweet Rabbit completey flat.

Includes - findom - financial domination - elite financial domination - cock tease - challenges - extreme domination - ruination fantasy - femdom pov - goddess worship - verbal humiliation - mindfuck - manipulatrix - ebony female domination - ebony Like that little voice constantly going off in your head...I am there when you let your guard down. Every part of you yearns to be fully devoted to me. It frightens you and excites you in equal measure. Knowing that you want nothing more than to be mine. Completely...It makes you hard just thinking about giving it all to me. Giving it all away. Not caring who knows... Who sees what you have become. You want to shout it out from the highest rooftop that you belong to me and no one else!So do it!Dip in!This clip has very powerful subliminal slave conditioning messages and you will find yourself compelled and transformed to do my bidding.After all, you are mine now...

Since we will share the same house and same other things (not the toilet for sure) you will fallow my commands and live under my rules only? Why not? Becouse you are a pathetic poor virgin pussy loser and you have 0 chances to have one in this life, so the only sex will be puussy hand f8ck, and my worm panty f8ck when you will be rewarded in same days! You will live under Big Step ****** torment, denied forever from pussy humiliated until you mess your pants like a sissy loser..

While Lady Kimi tortures the slaves nipples and spits in his face, Domi takes him under control and grabs his neck. He tilts. Then the ladies trample on the slave. Lady Domi puts on extra pumps for it.https://www.yezzclips.com/store599

My sexy ass in those tight Jeans is driving you nuts. you want to come as close as possible and touch it, donÂ´t you? I allow you to worship my ass. Come on closer so I can take your breath away with my sexy ass.

Licking Mary's feet is a pleasure. When I did it, I felt a salty taste. It is unfortunate that I can't pass it to you through the screen. It was delicious. I would like this moment of foot worship never to end.

Includes double domination - ebony female domination - Mistress Foxx - female domination - female supremacy - face slapping - verbal humiliation - nipple play - caning - cock caning - extreme domination - foot worship - foot domination - foot fetish - trampling - pantyhose domination - shoe worship - high heels - scissorhold - head scissors - spitting - spit fetish Mistresses Ava Black and Foxx received communication from this guy's wife. He had been caught cheating. But like the true cheating liar that he was he had tried to get away with it.But he had been truly snared and now his wife was threatening divorce. He begged for mercy, and the only compromise she was willing to give him was that he visit 2 Dommes to set him straight and make sure that he didn't do it again.So he found himself on his knees begging to receive whatever punishment he deserved.And believe me these Mistresses believe he deserves a lot of punishment!He gets slapped about, his nipples are scratched and slapped, and his cock is slapped and punched like the useless cheating flap of meat that it is! And just to make sure that he never uses that cock to cheat with again they cane it hard and good with their heavy canes!Then Mistresses cane the top and bottom of his cock hard. He tries to run away from their canes so they cane his arse as well to stop him from flinching.They think he deserves a hand caning too, just to make sure he can't jerk off that cheating meat of his! Then they trample him hard and heavy into the floor! He squirms at the intense weight of these Amazon Goddesses! They are too much for him to handle and they know it! But they won't stop trampling him just because it hurts him! In fact it only makes them trample him even more!And as he suffers through it they bless him with their divine spit so he can endure even more. After all he is going to be visiting them for a very long time too. That's going to be their recommendation to his wife. And he's powerless to stop them!

As many know I've recently become Sasara's real life slave so we've been shooting on a nearly daily basis (she never asked, she just 'shows up' at my place). Sasara wanted another shoot a few days after we did a scene called 'Sock Bully'. Knowing fully well how much I hate feet, she wanted to try things a little differently this time around. She put a collar and leash on me, handcuffed me, taped my mouth shut with duct tape, then proceeded to crush my face beneath the hard soles of her boots causing me to grunt in pain. "How does it feel to be my little slave?" she asks with a smile."Now you're going to smell my socks cause you don't suffer enough." To my complete ******, when she peeled off her knee high boots, she was still wearing the same Hello Kitty socks she wore from our first shoot DAYS ago! She never even took them off! She wore them out even more! -Just to make them smell stronger and more pungent than the first time so she could see me squirm while enjoying my reactions to smelling her smelly 'over worn' socks!"Now smell them." Sasara insists smothering my face in her stinky pungent socks that were over one week old! To make things worse she peels off her socks making me lick her bare feet to clean off all the pungent sock lint! Asking me to "Smell them also at the same time." as I smell and lick her sweaty soles with my tongue hoping she will end the shoot soon. After licking her feet she tramples me beneath her fullweight crushing my rib cage -forward and reverse trample! I film a nice POV shot of her crushing me and in this video I include behind the scenes footage of me getting that angle for you guys to enjoy as she crushes me filming her from below!EXTRA SCENES BEFORE/AFTER END CREDITS FEATURING AN ALTERNATIVE CAMERA ANGLE OF THE SHOOT AND BEHIND THE SCENES FOOTAGE TAKEN FROM A 2ND CAMERA! 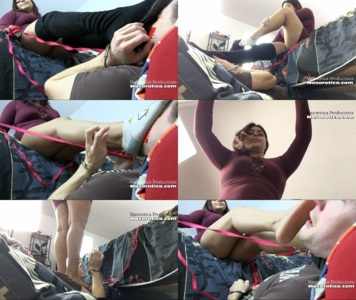 Well, my little human rug, I brought along my dirty hiking boots today - and I'll now clean them on your face! Yes, I know the deep tread is very painful - but unfortunately the dirt sticks to it pretty well - so I'll have to stomp down hard to get it all out! But you gladly sacrifice your face to get my shoes clean, don't you?! Not that it really matters ... you're not getting away anyway! And don't scream so loud ... what will the neighbors think? :-D And if there's any dirt left in the tread, you'll lick them clean afterwards ... until your tongue is also bruised! :-D

Here you are again, my little footlover. YouÂre worshipping and watching my dirty feet. Listen to my sensual voice and get even hornierÂminute by minute. Your biggest wish is to touch and smell those feet and wank your pathetic dick. Luckily, I let you jerk off your cock. Get this clip now!

Miss Serena feeds her slaves today with marshmallow mice and the filth of her feet and foot sweat. The mistress packs the sweets under her soles, in her socks. In addition, she packs marshmallow mice in her stinky, old sneakers. Then the pretty mistress goes for a walk. She crushes the sweets under her soles and in her shoes. After the walk, she gets the crushed sweets out of her socks and shoes. She feeds the loser with his slave meal. A mix of crushed marshmallow, sock lint, foot sweat and dirt from her feet. If he does not eat fast enough or gives a word against, she will beat him without mercy with the whip. So slaves are fed at Miss Sernea.

137019 - Playing Tease and Denial with my Submissive BoyToy

Roxy uses her slave as a living trash bin and snapping sunflower seeds. While she eats clear seeds, Alex eats disgusting husk. Roxy loves to use her slave as a trashbin. First, because she don't need to find a regular trashbin. And the second is, because she don't need to fed her slave also. For Alex it's very hard to swallow all sunflower seed husks, but Roxy helps him. She spits into the slave's mouth and then tells him to swallow this disgusting mess. She also uses Alex as a footstool for her feet in dirty street sneakers. Unfortunately this video is captured only from one angle. But the good thing is that video captured without cuts, so you can be sure that the slave is swallows everything that comes into his dirty mouth.