American Brat Ms. Milano orders Her slave to put his nose right next to the sole of Her flat so She can dangle it off Her foot, teasing & tort*ring him...She then makes him lick Her sweaty, bare soles, followed up by a full body massage; fully-clothed of course. She would never let loser-slave see Her without clothes.

My slaves need to eat a rich and healthy meal to make the grad to my demandings. So from time to time I feed those puppies - but not the way you propably think right now. I make them lay in front of me on the ground and beg. After that the may kiss my shoes and feet and the feeding starts. There's a bowl filled with the water i washed my shoes and feet in - and he has to drink it all up and lick it from my shoes and feet - that's "food" enought for him!

Stella is punishing her slave in public. She is sitting on his face smoking a cigarette enjoying the nice weather. She rubs her ass in his face so he can not breathe. Beautiful close-ups!

Its been a long time coming.. I need to show this slave that I'm way out of his league.. & that I'll NEVER date him.. Even though I told this BITCH that he doesn't stand a chance.. I need to show him.. the quickest & easiest way to show him.. is to kick him in the fucking balls over & over again.. that'll show him that I have NO use for him or his pathetic nuts. ha ha ha

Out partying all night in her hot black ankle boots Mina's here to get them licked clean! They tasted like p155 and she explains why in the video. Everything from washroom conditions at the club, to possible v0m1t, to herself p331ng on the streets while getting a bit of golden nectar of her own on those boot soles. Either way Mina has a good laugh as she watches me lick those soles and suck those heels!EXTRA SCENE AFTER CREDITS! 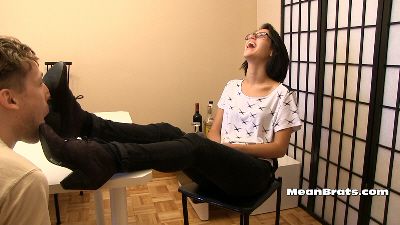 young redhead teen girl Jamie Kate sits on her victim takes off her boots and wants a guy to smell her stinky socks. She covers his face with her sweaty socks

"well lil slave..i am going to teach YOU a lesson today..with this whip..." beautiful latin mistress fernanda says as she enters the scene...she smiles a lot here which indicates that she will really enjoy now to give YOU a thrashing YOU wont forget in YOUR life...she is such a sadistic bitch... which leaves us always speechless... and did YOU notice how incredible gorgeous she looks with that sexy black shorts and that biker leather jacket and those leather gloves? well... keep that in YOUR mind, while she will thrash out the living daylights of you...and trust us...she will and she wont hesitate for a second if she has a whip in her cruel hands... and this whip is a very hard whip with knotted stripes...it stings deeply into a bare backside...but although YOUR ass may be welted and damaged all over our cruel bitch here wont be satisfied, so she takes out a thin cane to bring YOU til total exhaution...she doesnt hold back and gives everything she has in her right arm to bring YOU to tears... class a very hard femdom pov clip! german language (but the language of a whip and cane is international...). clip duration: 06.34 mins.

$$$A MEAN BRATS PRODUCTIONChanel takes pics and vids of Walter licking street dirt off the soles of her boots! Extremely hot clip!'CHANEL'S EDITION' CONTAINS AN EXCLUSIVE SCENE AFTER THE CREDITS. 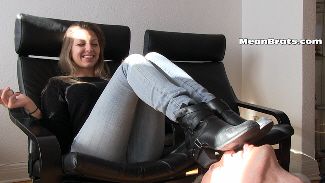 Two friends, Denisa and Amber, fights for a place to sit but Denisa fights dirty. She quickly beat Amber and takes her on the ground while Denisa is sitting victoriously in her chair. As a winner she enjoys the power and makes Amber take off her sneakers and smell her worn socks. Amber fights back and really doesn't want to do it but at the end she has no chance. She has to! Foot and socks domination and humiliation continues on while Amber has to put Denisa's socks in her mouth and taste her foot sweat after all day in those shoes. She has no choice and does it as well as kiss Denisa's ass and feet while kneeling before her and telling her she's the winner, that Denisa beat her.This is third person view video with parts of POV scenes to put you there under Denisa's feet and get dominated by this beautiful young goddess.

Three blackhaired beauties against one poor professor. Snow white Emily, perfect girl JJ and a new one called Angel. Angel is the future of our site. Sadistic and pretty, she learns how to mistreat a guy. Great teachers show her and lead her into the world of female domination. Strong faceslaps to the limit.

A new guy is here. Lets call him Shorty. He meets two girls from our site. Emily, Snow White beauty who is karate expert and Stacey, a strong kickboxer. They are in SWAT costumes and they try to get informations out of him. Trample t0rment. The girls examine him and trample his upper body with their bare feet.

Mistress Natalia dominates Alex with her gothic boots with damaged heel on right boot. Plastic heeltap was missed and only sharp metal needle is remain on right boot's heel. She sits on bar chair and press sharp heels into Alex's chest and belly. She scratch slave's skin with damaged heel and press Alex's chest hard with her boots. Mistress Natalia also puts her leg on other leg and press slave's body with more power and pain.

Goddess Dannie natural silk sock trampling, plimsolls stand on belly and crotch stomping and dancing. throat trample, the slave looked very painful and uncomfortable, but Dannie doesn't care about the pains of slave, she mocked and ridiculed the humiliation of slave. Lots of POV perspectives

Anna and Olesya are very good friends normally - but not today! One of them is very dominant: Anna! So Olesya has to take lot of nasty stuff today...! She starts with some slaps at her sexy jeans butt. But this is only the beginning! Few moments later Anna's ass sits down at Olesya's face. She tries to resist her with all her power - but Olesya has no chance against the powerful, mighty and dominant Anna!

I took a nice walk in the park with my friend - but with all the wet weather recently my boots are terribly dirty when we get back to the car - good thing we kept the slave in the back - ready to serve us at any time! I grab him and pull him between our seats - then shove my dirty boot soles right into his face. He has to lick the dirty boots and gets the dirt rubbed all over his face as well. In the end his face, his tongue and even his teeth are brown from all the dirt that was under my boots - but at least my boots are clean now!

Mistress Lea trample her slave under her very old black converse. She trample his balls, stomp him, jump him, stand on his face, crush his hands and choke him without any pity for him.

OMG! I just can't believe it! This girl is so Freakin' Hot and it seems like she really enjoy to abuse this loser on top of it! I bet she was borned with a slave at her feet! Crystal was not really happy about this loser because he forgot some daily tasks to do! She wants to punish him for not being a good maid! She makes him stick his tongue out to lick and clean the bottom of her shoes! I want them well cleaned so make sure you lick all the dirt! Does it taste good? Tell me? Crystal also wants him to know what it's like to walk all day long with those shoes to she takes them off to cover his nose with them! Take a deep breathe in my shoe! Can you smell my day now? Crystal also wants him to worship her smelly feet so he must give them a Royal Treatment with his tongue! She also wants him to suck her irrisistible toes to make sure he remembers about his daily tasks! I would say just her smile of satisfaction worth a million dollar! Hot Clip! Highly Recommended!

Two notorious 'femme fatale' burglars break into a boy's home while he's sleeping! "Alright now, you sit on his face and I'll push on his chest! We'll smother him until he passes out, then we'll steal all of his valuables!" one girl says whispering to her partner! The girl abrubtely sits on his face! They smother, bounce, and wiggle their bums knocking the air out of his lungs!

The girls talk about what they'll steal as they smother him! His wimpering pleas can be heard from beneath their bums! "That'd be a funny obituary, de@th by smothering!" one girl jokes as the other laughs! Having a difficult time making him pass out the girls switch places! "Make sure your butt is covering his face!" the black girl says. "Oh he's not breathing!" laughs the white girl! "Shouldn't be too much longer now!"

He manages to break free from beneath her bum for a few seconds begging for them to stop! The white girl laughs pushing his face back under her bum! "Think he's de@d yet?" the black girl asks her friend! "Cause this guy's getting on my nerves, we're not leaving him alive!" The girls continue to smother him until he's de@d! 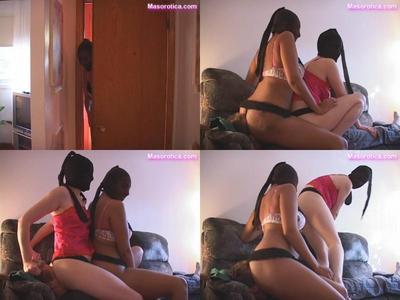