Starting the 1st January 2021 and the first of every month I will be releasing a financial debt contract series.I will be increasing the cost of each video depending on the month January $10, Feb $20, Dec $120 so be sure to buy each video in the series and wait patiently when the first of each month rolls around so you can be the first to buy and show your appreciation of my love for your wallet. Over 12 months you will pay off your debt of $780.The videos are short and sweet, Pure findom.

ENGLISH SPEAKINGCUSTOM REQUEST - I would like a foot gagging video. If possible, with as many close up views with various positions of your beautiful feet, severely choking your female slave...

The slave has become such a weakling - he screams in pain right away as I trample him under my high heel ankle boots! But I'll make him endure this pain for a while anyway and enjoy the marks my heels and the tread leave on his chest and stomach. I enjoy pressing the heels deep into his flesh and seeing him suffer under my boot soles. Then I order him to take off the boots and I continue to trample his body under my bare feet. Obviously, I'm not going to make it easy for him - now I'll trample him under my tip-toes, jump all over his body and stand on his throat with my full weight - I really don't think this will be less pain for him!

I know you wake up every day with the need for a greater purpose in life. You probably spend a lot of your time working, not having very fulfilling relationships, and looking forward to jerking off. This is not about jerking off. This is about transforming you from an useless excuse for a human being into something useful. A tool for my pleasure. This is a daily motivational program that will make you meditate on what it means to be submissive, on what it means to serve. It will remind you to focus and keep your eyes on the prize, and that is making yourself into a better person by being a better slave.

This clip is an extremely humiliating *REALTALK - ANNOUNCEMENT* including a MEGA HARD BRAINFUCK ! After a few weeks of very little to no activity, it's time for "cleaning up", cunt ;) What I want to achieve with it ?! For my candidates, wasted sluts and also future, dirty beta-bitches who want to get closer to ME, it is A MUST to get this loserporn in their collection!

Five guys are lying on the floor. A camera on a tripod stands behind one of their heads and is recording a shot which you can see in Ã¢ÂÂWalking on stomachÃ¢ÂÂ. The girls walk in circles one after the other, stepping on the guysÃ¢ÂÂ chests and stomachs. There are eight girls in all and they are all wearing flats. Time: 3.57 min. 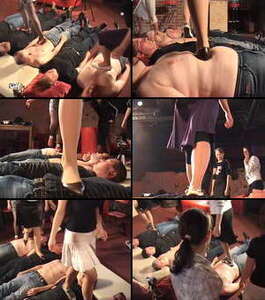 ITALIAN SPEAKINGToday I'm with my beautiful Mistress friend in Milan, we have a couple of slave that need to prove themselves. We are going to see which one of them can most withstand the pain of our slaps. Of course we alternate between our slaves, making sure they can't escape the slapping intensity of our beautiful Sexy Hands of Pain...

We want you as our slave, 100% our property! You will belong to us forever through our blackmail contract. There will be no turning back. We are two luxury ladies and as such we deserve nothing but luxury, which you will help finance. With our extreme blackmail contract you have no other option! For you there will be soon only water and bread because all your money will belong to us. You don't need it anymore, blackmail bitch! Got it?!

Starting the 1st January 2021 and the first of every month I will be releasing a financial debt contract series.I will be increasing the cost of each video depending on the month January $10, Feb $20, Dec $120 so be sure to buy each video in the series and wait patiently when the first of each month rolls around so you can be the first to buy and show your appreciation of my love for your wallet. Over 12 months you will pay off your debt of $780.The videos are short and sweet, Pure findom.

I love how good my ass looks framed by suspenders and stockings. You can love it too. Worship and drool over my perfect ass.

Mistress Sofi in home leggings is very passionate about the video game and does not pay attention to the fact that she is sitting on the face of the slave. Sofi sits on her slave chair with all her weight and ignores his groans. This is fullweight ignoring face-sitting in tight spandex yoga pants.

I love how good my ass looks framed by suspenders and stockings. You can love it too. Worship and drool over my perfect ass.

Miss Murielle: It's the first time I've had a foot slave under my feet. I will now press my ballet flats and my bare feet into his face and enjoy it. First I let him feel the soles of my dirty ballet flats while I ignore him. His face is a footrest for young girls' shoes. That's right. Then I take off my ballet flats and press my bare, damp feet into his face. The white skin of my young feet goes very well on the face of a foot slave. Yes, smell my hot feet! There is no escape for you.

These precious shoes deserve only the very best treatment, so the slave must put his best efforts into it for the two Mistresses. He begins carefully kissing the shoes. Queen Hanna and Mistress Jane watch him closely, because they won't tolerate a single mistake. The slave tries to caress and kiss the shoes of his mistresses from all sides, but will he manage to make the mistresses really happy?

Mrs Anna tramples and stomps slave's hand and fingers with her full weight (63kg / 139lbs). She stands on them in her dirty street sneakers and squeezes it's skin. Mrs Anna tramples Alex's hands with both feet, only on one foot, an even on tiptoes... but she thinks that it's not cruel enough. So she takes a dirty plastic doormat with very sharp needle spikes on it. Even a slightly touch makes the slave cry... and what happens when Mrs Anna presses his hands to that carpet with her full weight?