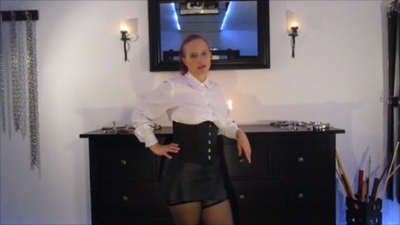 Lezdom Soap Opera12 Lessions for Slavegirl Ann! Complete Movie!Lady Deborah makes clear to her new slave Ann what she expects from her. That she has to execute all her orders and suffer all the punishment she wants. The young Mistress ties Ann's hands behind her back and gives her breasts clamps to torture her. The introduction also begins with lesson 1. Its follow 12 hard lessions for the sub. The Video uncludes: Face SlappingFeet SmellingFoot WorshipFacesitting and SmotheringStrapon, Dominant LickingSpankingAss WorshipChoking

Cute, dominant Miss Serena removes her sneakers and her socks and she starts teasing the loser under her bare, moist feet. She his his face and stomps on his head and lets him clean her sweaty, little soles with his worthless tongue. For her the loser lives only to adore her cute feet and her little, suckable toes.

VIDEO IN ENGLISH!According to the Goddess Gloria wakes up in the morning, her house slave must immediately be Maskjoe for licking on the spot. You summon him and orders him to lick her pussy at once.

Slave Richie must wait for his mistress on knees and with handcuffs in the room. Goddess Gloria then comes in. In a usually dominant way it she comes towards it, takes it at the hair and says "come here so and you are licking me now"! She sits up with a leg on the table and Richie must you lick the pussy on knees, the hands tied up into handcuffs. He may stop only when she has come to the orgasm.