This clip is nothing but my g/f Xana & I kicking a loser right in the nuts. We kick him with boots, platform wedges, & sneakers. We always kick 'em as hard as we can, & we also hurt the bitchs balls in some other ways too. We knee 'em, & punch 'em, & both kick 'em at the same exact time together.

Damn! This geek should've done my homework for today but he didn't - of course there's no way for him to get off without a proper punishment! So i drag him into the toilet room and start facesitting this weak jerk right on the toilet wearing my tight jeans! This idiot can call himself lucky that i punish him usign my gorgeous ass instead of just getting him beat up by a few friends of mine! I facesit him in various positions, nearly crushing his head between the hard jeans and the hard toilet bowl before i put his head face heading down into the toilet bowl and flush! Next time he won't do my homework i'll make him clean every toilet with his fucking tongue.

Oh, you really love this video where the beautiful Elizabeth chat with HER boyfriend seated comfortably in the face of a slave who constantly fight for breathewhile his head is cruelly crushed by a powerful ass who tries to swallow his face.

I've been walking around barefoot in my stilettos all day long at an outdoor mall & my feet get so sweaty & smelly in these shoes. Now that I'm home, your job is to lick my dirty sweaty toejam from between my pretty toes. My feet are really sweaty, so you better do a good job. Eww they stink so bad too! Ha ha.

First part of the video, hot and muscular Maria starts to squeeze Steve's head between her powerful legs ... followed by a sensual front and back facesitting , hand-chokes and throat crushing under her foot in an humiliating position for Steve !! 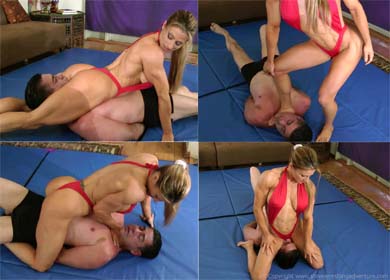 This is Session 8 of a 52 week long study. The Goal is to help Subjects suffering from the Sexual Disorder known as foot fetish to break their addiction. Today's Objective is to introduce severe physical pain & psychological humiliation by way of Sexual Rejection, as a direct consequence of the Subject's fetishistic sexual behavior. I have previously explained to the Subject that because of his bad behavior, women either see him as a pathetic wimp that they can control, or as a creepy pervert that makes them feel uncomfortable & someone to avoid. But either way, someone that grovels at a woman's feet & becomes sexually aroused by the smell of a female's stinky shoes, will either be shunned or seen as an inferior (sexually rejected in both cases). This is the reason why mean girls used to bully him back in school. Today's scenario, is that I will take on the role of 1 such mean girl, in order to help the Subject to reconnect with his past, as well as to help demonstrate further, the key points of this lesson.

Little massage by walking on body can't be bad hmm? :) I trampled my slave in Converse sneakers and scuff his face with my shoes. The same in socks. And I make him sniff them. While they are hot and fresh. I slapping him to his face by my feet. And I trample him also with my bare feet...

Everybody who ever had the honor of being allowed to perform tasks for me knows, that my tough demands take you over the edge, right? So why don`t you dare to send me those humiliating picture proofs I asked you for ? I am sick of all those "customers" who just buy my clips as some kind of jerk off material. You're a slave ! You are my tool, my puppet, my plaything and today -once and for all times- you will prove it to me. Today I will fuck you over and I want you to do what you are told. I don`t care how you get it done - as long as you do it. This clip is interactive and has 2 possible endings: A good ending for me of course as well as a bad ending for you. That`s pretty fair, isn`t it ? At least I make sure that I will get my amusement the one way or another ! You'll find both endings in my clipstore.

If you are a fan of BOSTON-CRAB and CAMEL-CLUTCH, then this clip is for you !! Jennifer is coming back home and finds a guy in her living room ! The unfortunate intruder is quickly knocked down and repeatedly put in boston-crabs and camel-clutch !!! Reals holds, real screams !! 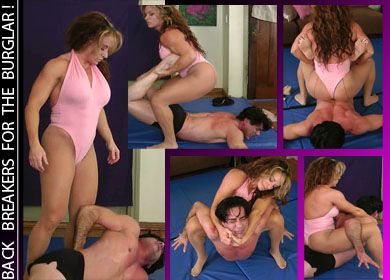 Elsa is easily the most innocent girl I've ever seen. Having someone at her feet who happily inhales the smell of her toes and licks all the sweat off her soles is quite unusual for her. She showed up late in the afternoon after school, so her feet had their time in her shoes. Even they've seen each other's videos, the two girls have never met before in person, but Clarissa took off her socks without any hesitation, and started to lick Elsa's super young 18 y/o soles as if she would have done it for a hundred times already! As soon as Clarissa started to suck on her cute long toes, Elsa obviously started to enjoy this treatment to her beautiful feet, too!

Wow! That was a long shopping day for Roxy so she comes to visit us before party all night! She needed to plan her night on the computer so she asks me if there is a slave available in the house to rest her tired feet! I thought she was joking at first but she was not! I was all alone so I just offer myself to serve as her footstool after she asks me again with her irresistable smile...How could you say no to a sexy bomb like Roxy? Roxy just can't wait to take her boots off to cover my face with her sweaty white socks! They were burning my face bit I couldn't complain! The smell was so strong! She rubs them all over my face while she's chatting with her friends on fuckbook! She also orders me to take some deep breaths so it gives some fresh air to her feet! Roxy now asks me to take her socks off to completely cover my face with her smelly barefeet! Can you also lick the bottom of my soles? They need a refresh for the happy hour! Another Hot Clip!

Yasemin booked for herself a hard day in an SM Studio. Master Ben leads them into the darkroom where she first needs to give him a deep throat blowjob with a full jizzum in her mouth. After he could relieve himself, he goes to the education of his slave. He ties her to a pole and hits her with the riding crop on breasts and the vadge. After he torments them with clamps which he clings to her tits and her pussy. Almost at the end comes a hard wax torture. Painful tit humilator and extreme hot wax on slavegirls tits and body.

Laura has never trampled a man before, but as a Judo fighter she's used to be superior to men. She chose a pair of boots with wedge heels for her first trampling session and goes rough on the slave right away. Although Laura has a hard time keeping her balance on her human rug she manages to inflict serious pain on her victim. His chest and stomach are covered with tread marks from the deep tread of her boots after a few minutes - but of course she doesn't stop there. She takes her boots and socks off while standing on him and then tries to stand on his head right away, but slips off on the first try. So she continues to trample his body before she tries again - and keeps standing on his head. In the end she also jumps a few times - overall a great first trampling video.

Don't ever make a bet with a young brat saying that she can't even walk in her chucks with no laces! Dorothy made her way to the studio, and gets her revard: the footboy helpless under her chair. He gets both inlets abused on his face, one at a time! With taped mouth he must inhale the stink of Dorothy's feet, then he gets a clothespin on his nose to open up his mouth and use his tongue on those young soles. Of course, she starts her favorite game, too: making the loser chock on her feet as she rams them down his throat!

This slave wanted more than anything to get kicked in the nuts by me. But unfortunately for him, underestimated how intense this session was going to be. I kick so much harder than he ever thought was even possible, & I'm crueler than he ever imagined. He requested my biker boots & soon realized that was a mistake. He couldn't even handle my 1st kick. All the others I gave him were just heartless.

Deborah is a go-go dancer. She likes her hobby. She dances whatever she does. Her body is her world and guy called Perica is her dance floor. Dance lovers, enjoy in the movements of pretty Deborah. Scissorhold.