Lady Shayla and lady Chantal want to have fun on the cost of the slave. They visit him in the horse stable and start to push him around. He needs to sweep the stable on his knees, then clean the dirty boots. You can see the ladies having fun with her victim. The slave is ridden and has again to clean the stable-dirty boots with his tongue. He also gets some spit from Shayla for licking up. The ladies trample him painfully with her spiky heels, push hay in his mouth and torment him. A nice dominance and trampling video.

Mistress Svenja put on her brand new high heels - with extremely thin 14cm heels! She asks the slave if he likes them before she steps on him - and of course he does - but only until she steps on his body! The sharp heels leave painful marks on his skin and Svenja loves to play with her weight to cause him pain. After a while he twitches when she only lifts a foot from the ground! She also puts these thin heels on his groin and asks if she should crush his dick underneath. After that she shows some mercy and takes her shoes off - but now she's really getting into it and jumps all over his body, steps on his head with her full weight and stomps his body. In the end the slave's totally wracked and she just leaves him there - with her shoes standing on his chest. He has to wait till she comes back and continues his painful punishment!

Lady Ginger tries out a new slave. He must worship her high heels, is spit on and his little cock goes painfully under Gingers shoesoles and heels.

Sindy wants to test her slave's endurance today. She's wearing blue sneakers when she first steps on his chest and lights up a cigarette. But she doesn't plan to just stand there - she wants to bounce and jump all over him. After a while she pulls a stool over his hips, gets on it and then jumps down from it - landing right on his chest. Again and again she jumps on him, from the stool, from the couch next to him or just plain on his body. In the end she takes her sneakers off as well as continues to jump all over him again. All the stomping and jumping really wears the slave out and at some point she loses interest in torturing him anymore - and just takes off - leaving him and his pain behind!

The strap-on fuck arouses the domina quite good. The slave has to change the position and to bend over a chair. Now the slave's ass nicely stands up in the air. The dead keen mistress lets the fuck-ass have it really good. The slave's moaning and groaning merge in each other. The slave is in ecstasy of his use by the domina. To better the direction of the bangs the slave has to pull on the shoes to the mistress' feet. And yet vehement action goes on in the ass. With spanks on the ass the domina enhances the lust of her pain-loving slave. The randy mistress lets the slave lick out her snatch thoroughly. He does it well. The domina allows the slave the favor to jerk off his prick and gives head. Whenever the slave fails to lick her right he receives beatings. As reward the slave is allowed to jerk off the twat of the mistress and himself. He snots all his bang-sauce on her thick tits.... 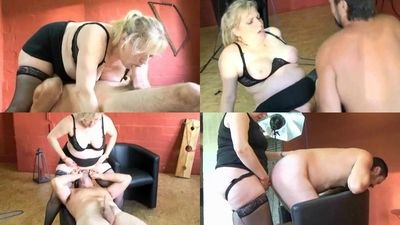 Cathy trains her new slave - YOU - to be a good obeying slave. She walks trough the house demanding that you follow her crawling before you're allowed to clean her shoes and feet with your tongue. She also facesits you before she tramples your weak body under her big feet and her massive weight.

She steps on his nuts FULL WEIGHT & keeps standing on them & won't get off!!.. Megan came so close to popping this big fat injured nut the other day - but this time she plans on kicking it & stepping on it even HARDER til she makes it Burst!!.. Megan is DETERMINED to POP this big fat fluid filled nut!!!.. She knows his injured nut is filling up with fluid & getting worse every day & she knows she must take Action!!.. This loser has no Medical Insurance & Megan refuses to let him spend money on expensive nut surgery - She wants EVERY penny he has for Herself!.. First she kicks him in the nuts HARD with her pointy toe stiletto boots & then she STEPS on his nuts FULL WEIGHT with boots on!!!.. Then Megan takes off her boots & steps on his nads with her sexy stocking feet & tries to POP them!!. She HEEL KICKS his nuts with 1 foot while Standing FULL WEIGHT on them with the other!!!

Damn! It seems like Mika also needs attention on her feet especially after a long day with her shoes on! She makes this loser lie down on the floor to serve as a foot stool! She knows about his addiction to smelly feet so why not take advantage? She asks him to take her shoes off to cover his face with sweaty black socks! Mika just relaxes on the couch and watch the movie while this loser is breathing with her stinky socks on his nose! They were so warm and wet of sweat! Mika also orders to take her socks off to rest her stinky soles on his face! She also makes him lick her bare feet to refresh the bottom with his tongue! It seems like she really enjoy to take advantage of this loser!

Lady Ginger, Chantal and Vanessa let their victim suffer. They trample and jump on him, let him lick their boots and advise the slave to sing for his humiliation. Ginger and Chantal torture the victim by nipple torture. Very nice and long trampling and domination video

Im kind of tired of running your bullshit errands all day?answer the phone, get my coffee, file these papers?.enough is enough! I walk into your office, dressed to kiII and seduce you. At first you are hesitant but it doesn't take long to convince you to touch on it. Making you feel so good in seconds, theres no way you can take your hand off your cock now?.so close to orgasm, I count you down. 10..9?8?7?6?5?4?.3?2?1?. your "O" face is so promising as I whip out my camera and snap a photo. Oh oh!!! Look who's the bitch now ;)

The slave takes it hard from the four troopers. He licks the dirty boots, isridden on the paddock, trampled and constantly whipped. The ladies decidemany bad things for him to entertain themselves, while they rotatory ride ona real horse.

Sue is not afraid to use her slave in public too. So she walks some stairs up and down barefeet just to make her sexy feet dirty. Then she lets her footboy lick up all the dirt from her gorgeous feet! She really likes to see him kneeling before her and worshipping her bare feet like that, so she can't hide her laughter!

18587 - Educational games in the horse stable

Lady Shayla and Lady Aalya ride on a slave in the stables. They make fun on him and let him lick their boots. The heels are pushedf in his mouth deeply. The slave has to stand a lot - he has to take off his shirt, because the ladies want to see the marks of their spiky heels on his skin. Again and again he is abused. A really nice domination and trampling video.

Mistress MaÃ©va doesn't like to have dirty boots, she orders her slave to lick clean her disgusting boots, the slave licks and eats the mud, grass and filth out of the soles and Mistress MaÃ©va gagg his mouth with her boots.

Black Lady means to be a more cruel bitch then Lady Alysha. Both Ladys wants to find out wich one is more cruel. First they use santa claus as a slave by pissing in his mouth then they starts to slap each other faces, spit on each other... wach it and decide who is the more dirty bitch.... 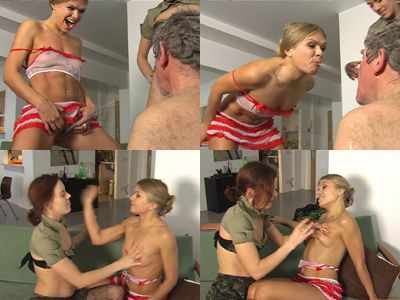 The clip begins with Hailey sitting on Walter attempting to use him as a human sled, telling him to slide down the hill! It didn't really work as she originally planned. Later she steps up on him using him as a human snowboard as he attempts to wiggle down the hill while she holds her balance standing on him!

It's all fun and giggles for Hailey, especially after she kicks up snow in his face! She runs down for the camera to bring it in for a close-up of his frozen snow filled face as she embarks on him once more riding him as a snowboard while he squirms and wiggles beneath her feet like some kind of snow bug!

Eventually her snowboard just "d1es/breaks" beneath her and refuses to wiggle any further as it lies in freezing snow in -30'c weather! 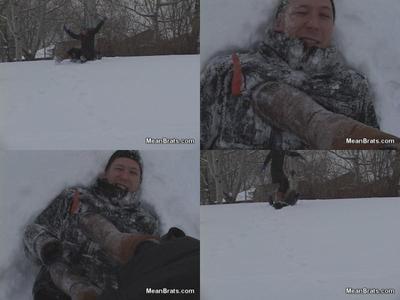 Alternative mistress Sandy looks extremely sexy wearing a short skirt, a deep plunging shirt and gray over-knee boots when she steps on her slave's naked chest. At first she struggles balancing on his body on the high heels - but gets a good grip soon and that's when she gets into it more and more. She playfully grinds her heels into his nipples and stomach before she decides to take her boots off. Without the boots it's obviously much easier to walk on the slave's body and she starts bouncing and stomping on his chest right away. But she likes standing on the tips of her toes the most - as it hurts him a lot! In the end she also steps on his head with both feet!

Custom clip request ''Would love a clip where you punish me for looking up your skirt. Wearing the lipstick in the clip BEG ME TO EAT YOU , the outfit in YOU ARE FIRED along with a tiny g-string (the skimpiest one you have:) ) You punish me breast smothering, forward/reverse face sitting and then you finish me off my plastering my face with lipstick kisses...covering it with lipstick kiss prints. no matter how much I try to get away...you keep my trapped and smothering me...''

Mistress Selina decides her slave needed a little punishing and put her slave in a cage to beg for mecy. Watch how she punsihes her slave and makes her slve beg for freedom. 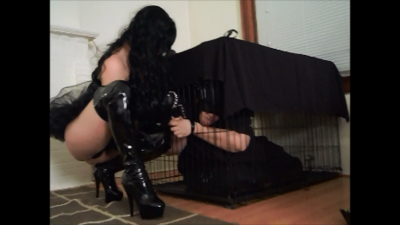 Miss January giggles with glee as She spits in my face, reminding me that it's an honor for me to accept Her spit. She's not done using me quite yet. She uses me as Her footstool while She reads in bed. Whatever pleases the Goddess.