[retro] This is old video with Alex. Sveta kicks Alex's chest very hard with her black sexy stripper shoes. She tries to apply as much power as she can. Sveta likes make alot of pain to the slave. So more she kicks Alex, more heavy kicks are.

Madame RavenRae met a new friend at the club She goes to in Hollywood. Turns out Her new friend "Kruel Kat" is a total Bitch and has slaves in Her personal life! What a small world...like this one guy She uses as a chaffeur and another guy who gives Her cash.So Raven told Kruel Kat about this loser who goes around paying Girls cash to worship Their feet....Kruel Kat was all about it.She had these 2-day old socks on that were super stinky & made this loser smell them, then made him give Her a foot massage while She condescendingly tells him he's a loser while laughing in his face.

35 Stairs, a stiff slope and 170 lbs on the back !! The challenge is on between Kasie and Jennifer . Be prepared for a breathtaking performance ...Probably our best Lift and Carry video as one of the girls just realizes an exploit by doing the way several times ( Watch the video to know who ) !! Great outdoor scene , great camera angles from front and behind, bikini attire ... Collectors , don't miss this one !! 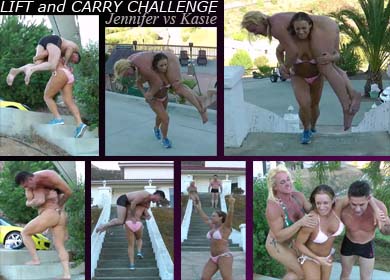 Mistress Kitty want to make lick clean its high heeled boots by a slave but he don't want, so, she beat him very hardly, she stomp him, kick him over and over, crush his balls, choke him, strangle him, knee him. She is realy angry and brutal.After the Beating, the slave is most obedient, he lick clean the Mistress Kitty's boots, over and over, he lick and swalow the dirt and mud from the soles, Mistress Kitty torture his eyes with its heels, gag his mouth hardly and make him crawl in the dirt at its feet.

Fact: Your hanger between the legs does not need a man. You can not bear children, you're not going to satisfy your woman in the situation and the part is small too. After a long phone call with your wife remains unanimously only a passable solution: We will castrate you. Your wife does not, she's already arrived in their new life. To what extent you wonder? I'll tell you everything in the clip. But, I'll give you a chance your virility * laughs * but still be saved. Or I'll separate directly with a cut eggs and tail of your body? 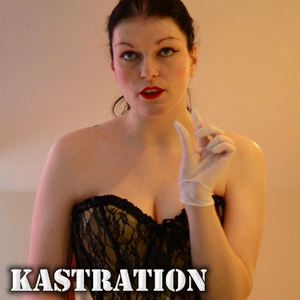 On your knees is how I like seeing you. Such an easy target, so weak... bowing at My feet and worshiping My legs. You Watch! You Worship! and you Weep! Atta boy :)

I almost Ruptured Tony the Tard the last time he was here & yet he STILL obsesses about my Perfect lil SMELLY feet 24/7 & Still Can't get me out of his head even months later.. Well I used the BITCH as My "kicking bag" last time & I've had many more Martial Arts Lessons since & have become quite the Expert at the "front snap kick" to the balls.. I've developed so much more power now & this BITCH has NO Idea just how badly he's about to get hurt.. It's Simple - IF he takes ALL My kicks to the nuts & is a "good kicking bag" for me today to practice on.. Then - I will Reward him by allowing him to sniff these STINKY boots I'm wearing that my pretty feet have been sweating in all day long.. Lets see how badly he wants to sniff them.. Badly enough to Suffer 2 Ruptured testicles? I'm going to find out. I'm in the mood to be amused & Rupturing some losers nuts is Exactly the type of Entertainment that I will enjoy! LOL

Mistress Natalia doesn't really care about the man lying next to her sexy glitter high heels - she just wants to have some fun hurting him! She steps on his chest and slowly walks on him - and forbids him to talk or moan - she doesn't want to be interrupted. The slave tries to keep quite but sometimes moans from the pain Natalia's sharp heels cause him - especially when she's standing on one foot only! After a while she gets off and slips out of her high heels - of course only to continue trampling him under her bare feet only seconds later. Now she can more easily walk on him and even put her sweaty feet on his face to keep him quite and make him sniff her sexy feet.

This double-clip actually features 4 Top Bitches because each clip has 2 Goddesses. First one is Miss Giselle and Her friend Jenna trampling Their slave, second clip features Madame RavenRae & Her friend order Their slave to sniff Their stinky socks.

Now seeing as you have clicked onto this video you must already have submissive desires and want to take the next step by becoming a BETA male! Hhaha keep dreaming you are just a loser scumbag, keep dreamimg! Ready for some painful humiliation tasks?Before starting you will need a wooden spoon (for your dirty hole obviously, the biggest one) a rope , a large floor to hump it like a pervert d*g....uhh so much action but you will love it sick pervert!

19 year-old samantha was going to Vegas & needed some easy $$$, but Her mom was at home. What to do? She love having Her feet lightly caressed....a finger going between Her toes & light kisses & sucking on them. She kicks back & relaxes, enjoying every moment AND collecting on it!

66821 - Trample and smelling domination for the new Mistress Tracy

Mistress tracy trample a slave for the first time, she trample him under her sneakers, jump on him. She then take off her shoes to making him smell her shoes, socks and feet and trample him again under her very pretty barefeet.

62697 - Hard Punishment for a telephone employee

Mistress Lydie receive a tÃ©lÃ©phone employee at home, the man is very impolite and disrespectful with Mistress Lydie, so she decide to punish him hardly. She knee him hardly in the balls and the man fall on the ground, Mistress Lydie begin to destroy his balls with trample and hard kick,she is without pity and kick him in the balls over and over. After the punishment, she force him to lick the disgusting soles of her high heeled sandals. After the punishment, Mistress Lydie want to humiliate this bad employee, she take of her high heeled shoes and make him smell her very stinky stocking feet, Mistress Lydie rubs her feet on his face and she then use his face like a footsool. She gagg is mouth hardly with her feet to be sure he smell correctly.

Cynthia is a girl who likes to party all the time and that night was totally crazy! She had her shoes on for twelve consecutive hours to party and dance so now she wants this loser slave to take them off and sniff her feet! The smell was really strong but she is kind of mad at this loser so she just don?t care! She rubs her feet all over his face and makes him lick the sweaty bottom of her soles! Cynthia also wants him to take her foot really deep into his mouth just to suck all the dirt! She just loves to feel his juicy tongue in between each of her toes! Especially after a long day! This clip was shot around 3h am so do not expect much!

In this clip I'm trying various smothering techniques on my slave. I start by binding his hands so he can't defend himself and then smother him with my hands. Then I'm grabbing a pillow and press it on his face tightly before I sit down on top of the pillow to apply more pressure. In the end I also sit on face without the pillow and crush his face under the hard jeans fabric while I smother him.

Pandoras' box is opened and three evils are together. Next trio are Emily, Sibilla and JJ. Emily is our oldest girl (she is still young) who becomes a real domina and cruel mistress. The next girl is Sibilla who is our favorite, young and natural born sadist. A new one is JJ. You saw her in our latest clips and I believe that you like her style and her wild behavior. The victeem is our lovely professor. He is born to be a slave. A slave for our three shiny stars... Barefeet stomach trample.

This is a custom video request and we really enjoyed it.Be excited to see three nice pairs of high heels with sharp heels, that are getting thinner with each pair and raise the level of pain.I am sinking in the heels in the stomach and change to position to make more marks.With the other leg i am showing you the heel, because the other one is lost in the stomach.