First half of the clip starts with Mistress Alexis resting her shoes on her slaves face. she later takes them off and puts her shoe over his face and makes him sniff the insides of her shoe while her other shoe is stepping on his dick. The video then transitions into spitting, where Mistress Alexis is hocking nasty loogies in her slaves mouth. She spits in his mouth for 5 minutes before ending it with some sadistic facesitting & ball busting. 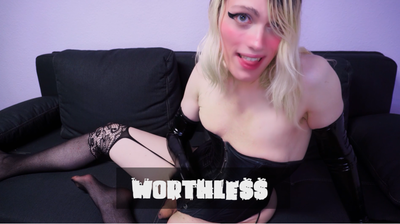 As you know I'm not just a money- but also a sexgoddess and keep having a lot of fun in bed with my lover. I am very sexual active and satisfied - quite contary to you, loser! Because you never get banged you're extremely horny all the time and always talking about how much you would love to fuck a hot, juicy, tight pussy however this will never happen. I watched and analysed you dumbass in detail and your diagnosis is: Unfuckable! You're physically and mentally not ment for sexual activities cause you only have a pathetic, ugly losercock and a insuperable blockade in your head too which makes it impossible for you to get close to wommen. Years went by and you never managed gaining sexual knowledge. You have no idea how to touch a girl, how to make her wet and how good sex works. You're a intimidated, poor sucker now who prefers licking feet instead of pussy because this fits your natural disposition! So start accepting your diagnosis and live with it; you will be unqualified for sex for ever and the only thing that is getting fucked is your bank account!

Trampling a dick on glass. The girl weighs 55 kilograms. The girl is wearing bright sandals, she stands on him in wide heels and soles. Time: 8.08 min. REMASTERED - movie from 2003.

This devoted fan can't stop .. he continues to worship Fox's beautiful feet. His happiness is that Fox lets him do it! She allows him to thoroughly lick her feet .. what else does he want? right - nothing! The slave tries very hard to please Fox because he is afraid that she will exchange him for someone else. This male slave polishes Fox's feet with his tongue while she watches him work.

Let me tell you an intimate secret of mine - Sometimes I can be a little bit of slob. I'm sure YOU're happy to hear that though, aren't you? You're a gross loser, desperate to be drowned in my scent and made to clean it. Bet it doesn't even sound gross to you: Being my personal cock cleaner? I just worked out and I could really use a shower. But I insist that you clean me with your tongue FIRST. YouÃ¢ÂÂd do anything for me, anything that will allow you to worship me. ANYTHING that will allow you to worship my cock. And I'll make you become addicted to this. 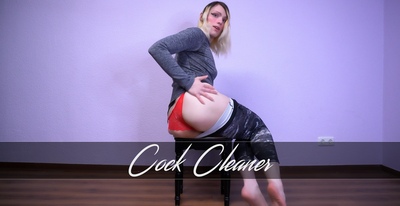 Mistress understand that you have been unable to make contributions due to becoming unemployed. Fortunately I have the perfect solution: I started a business for you. From now on you'll be sucking cock in the basement of my establishment, working behind the gloryhole, satisfying my regulars. Oh and: Installing this wasn't quite as cheap as you might imagine, which means that you're now in debt to me... And I am not letting you go until you've paid me $3000. I figured it'd only be fair to charge 200% interest. And since I have been so kind to you, I insist that we don't charge more than $5 per customer. Why let money get in the way of me having fun, hmh? After all I'm the main attraction here. Oh feel free to cry, you'll be sucking cock all day anyways. I hope that unique stench of cum and piss won't drive you insane too soon. And don't expect too good hygiene from your customers.

You really thought we were going to have a threesome?Ahah, fuck no. You're infinitely inferior to even my slave. And speaking of which, actually, maybe you should be THEIR slave. Like the lowest of the low. Exactly what you are. You ain't going anywhere until you have done EXACTLY as I tell you to. And I have a couple of ideas what I could make the two of you do...

Dressed in Latex with My Louboutin So Kate's - I work out all My stresses of the day on My slaves athletic little asshole. I'm in a filthy mood and I want this slut to do ALL the work. Spread out in a vulnerable position, looking as submissive as possible, I give you My strap on submission POV clip. My tits struggling to stay encased within My latex, watch as I ride and bounce My cock into this bitch. It's going to be a VERY distracting watch.

ENGLISH SPEAKINGToday I have my slave tightly bound I the head table. This is an extremely uncomfortable position for him. I have also added a tight stocking mask around his head and face making it more difficult for him to breathe. As he struggles, I?m going to enjoy making him suffer. He is going to have the luxury of worshiping my beautiful designer boots. Of course, to make it even more painful for my bitch, using some PVC tape, I decide to tightly bind his head and face with an extra layer of restriction. I laugh at his muffled protests, as the tape tightens around his already stocking masked face and head. I order to allow his tongue to get going and begin licking my beautiful boots; I cut a tiny gap at his mouth. I continue to enjoy making him suffer as he struggles in his Tape Head Bootdom?

ITALIAN SPEAKINGToday I am very energized, I have prepared myself in the smallest details for a football training with my slave Enea, I have been waiting for this moment for a long time to have some fun My slave is inexplicably bent to the ground...I don't like that already. I ask him for an explanation and he replies that he forgot the ball...I can't believe it...pathetic jerk. I'm ready now and I still want my training, no ball? Well, I'll kick his balls...ahahahah I want to try different shots: kick with the instep, kick with the heel, left and right, scissor kick. I also want to train with an unfairness...and the foul from behind amuses me too much. How not to end with some penalty kicks with a run-up. No, it's not over yet...once I have chosen my favorite kick I use it to definitively knock the slave out with a series of very powerful kicks, when he falls at my feet I allow him to kiss them. I can't wait for the European Championships to start to cheer on Italy and discover other shots on which I can train...and maybe without the ball it's even better ahahahahah?

Stupid, deluded, FOOLISH slave thinks he can steal a pair of a panties and that they'll save his precious balls from the wrath of My boots, WRONG. I rip his precious panties off and gag him with them to muffle his groans of distress and I take My time busting this slaves balls, even luring him into a FALSE sense of security at one point and offering a hug only to then knee him hard in his slave dick!

If this slave wants to worship My boots, then he can take place as My doormat! To wipe the days filth off My thigh high shiny black pleaser boots, I mount this slave, trampling, treading and sc****** My heels all over his chest, hands, arms, legs and cock. I'll allow you to worship, but ONLY in the way that satisfies Me. Watch Me walk all over you, My rubber hanging over your head just dripping with SWEAT. Sc****** and pinching at your nipples with My stiletto heel and keeping your head into position with My boot to your throat if you become too eager.

My day at the Oubliette begins with a sadistic fucking. My beautiful body encased in delicious, hot, sweaty rubber while I pound away, thoroughly warming My cock up in this bitch's tight little hole. I just love to watch Myself in the mirror, could you bare to make eye contact?

FULL VERSION HD - Have you ever wondered what those arrogant Women in HR get up to behind closed doors? All those "mandatory" meetings and disciplinaries...? Smoking in very visible stockings with big hard strapon cocks. Look in as Myself and Miss Katherine Kendal discipline this lowly slave with our hard cocks. Made to suck, gag and wretch on one cock while his hole is thoroughly used and a*used by the other, instructing this wretched piece of meat to get on his knees, bend over the desk - wretching, gagging and convulsing while Mistress Diana Von Rigg deep throats her subject and Miss Kendal warms her cock up in his behind, we're taking our sweet time with this bitch.You can tell this bitch is starting to feel completely used and is almost begging to stop before We switch over again. Once Mistress Diana has slammed her cock into his tight slave arsehole a few times, We decide this is the perfect opportunity to enjoy a long, slender, cigarette. Pounding the life out this slave as he sucks the soul from our cocks and using him as a receptacle for our cigarette ash.