Dorothy takes great fun in one of her favorite foot fetish activities, which is trampling with no compassion! She trains her slave to endure higher and higher jumps - in her shoes, and barefoot, too. Well, it seems the carpet has a lot to learn!

No servant can resist the goddess in tights and boots. For one of the victims just a little torture (Ballbusting, CBT, Nipple torture) in the Cage. For the servant in the Blackbox lick boots, trampling and Facesitting.

Sexy Michelle K. loves to smothers a guy with her big hands . long sexy legs and with sitting on his throat... she s great .. fantastic breath controlling

Megan & Paige are on their break from working as Santa Girls at the mall & their stocking feet are drenched with sweat! This is the continuation of Part 1. The girls decide to have some fun with this loser by making him sniff the insides of their incredibly stinky high heel boots & they smother his face with their sweaty smelly stocking feet! They order him to jerk off to the scent of their stinky stocking feet while smothering his face with their sweaty hose & check out what they do to him after he loses control & makes a mess! Megan stomps his balls & slaps him across the face & then Paige actually kicks his balls hard enough to cause even more cum to shoot out of his dick! 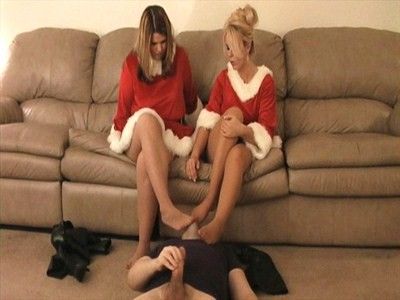 Hey little foot slave - i see you crawled under my make up desk to spy on my adorable feet, didn't you? You like what you see, don't you? My perfect feet - so near but still unreachable! Wouldn't you just love to smell them? Kiss them? Lick them? Come on!

Dimitri is a dear friend of mine. He's not a fakir (not yet, at least), but he'd like emulate my performance one day. This is my first video with him. In that event, we have had to face the incredible shots of Alessandra, a beautiful giant kickboxer (six feet tall, 7,5 size, 163 lb.) She punches and kicks Dimitri with low power; at the contrary, Fakir Ab takes in this session a tremendous belly beating: you can easily hear the sound of full power punches and kicks to his stomach. The Human Punching Bag performance is often dangerous - the Houdini's case teaches a lethal lesson - but when you are a fakir and you have adrenaline in the veins and breath in the lungs, you are near to invulnerability. Fakir Ab in this video is pretty unbelievable. Belly punching and kicking to the maximum degree! 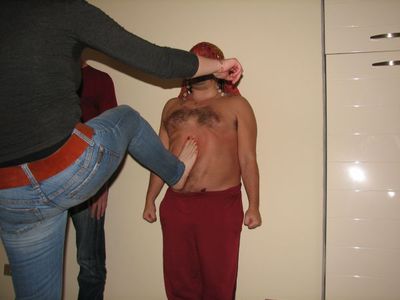 Ester and Simone are not happy with Natalie sleeping mode so they have other plans for her. First they go with bondage and sleeping Natalie is starting to realise what Ester is Simone wants to do but now its to late. They want Natalie to suck their feet and she is making their wish come true even .Expression on her face shows she is not so happy with it. After a fresh start of feet sucking, they make her lie down on the floor with more of that sweet foot licking. Esther is taking her head and Simone is putting her toes into Natalies mouth.

In this biting clip you'll see mostly extreme close-ups as I torture my slave's arm and fingers with my sharp teeth. I start with his forearm and cover it with deep red bite marks from the elbow to his hand. Then I move on to his fingers, slowly grab one after another, move the finger slowly into my open mouth and then bite it hard. Of course every finger is bitten multiple times until all of his fingers are covered with bite marks as well!

You were just helping Amber with her workout and she is just finishing. Amber is all sweaty and her feet they must be so stinky right now. You wish you could just smell them for hours but she has no idea you like sweaty feet and socks so how to make it happen? Fortunately she wants you to rub her sweaty feet. It's now or never - let's let her know and hope it will come up just fine. You suggest to rub her feet in exchange to her letting you smell her feet. She's not as surprised and disgust as you thought and she agrees . Yesss!! This is it, you can now bury you face in her soles and sniff the goddesses scent.

I really like to rub my socks on your face! So lay down and relax so you have a good point of view from the bottom ? where you belong to! It's so much fun to rub my socks on your nose. By the way: How does it smell? It smells reaaally nice, doesn't it? And it tickles so funny ? Hihi! I have so much fun! Could do it over and over again... Do you like it as much as I do?

Welcome to MGH! An all girl High School filled with only the meanest girls! This is the story of a boy who was turned into a human carpet and placed in the girls washroom to be stood on, bullied, and humiliated by the entire school!

Stella has her slave on a leash and runs with him in public. He has to run like a dog, and Stella goes for a walk. She dressed him in a shirt where on the back "Stella property - Stella ownership" is. Middle of the road Stella let lick her stilettos clean from her slave. Then Stella makes a break. She sits down on his back and use it as a bank. Then she goes on with him on the leash.

When Madam works, she always needs a footrest for her magnificent shoes ! But the object does not serve that in that ! Is he going to manage to hold on ? Look and you will see slave ! 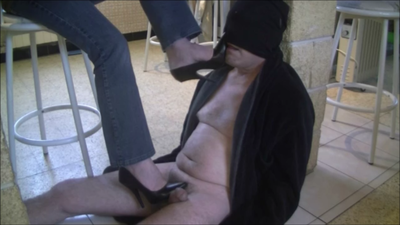 Mariah gets crazy. Some demon is inside her and Deborah is exorcist who wants to exorcize the thing from her. First, she tries to get rid of the devil inside Mariah's stomach and after that, she starts with the process of exorcism. She scratches her upper back and tries to send away the demon with pain.

She dresses in lingerie for me but wanted to make a video before she did anything else. Her flats were quite worn out and her feet smelled throughout the entire clip. Every time she stood up her feet got dirt on them too. You can see her videoing it herself from her point of view...she enjoys this too much. 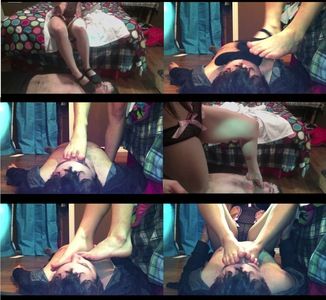 Tamara is the kind of girl who likes to relax and rest her feet after a long shopping day but the best way to do it is with her foot slave at her feet! She sits on her private human couch in a perfect position to use his face as footstool and makes him take her sneakers off to completely cover his face with her sweaty light blue socks! She is planning to watch a two hours movie in this position so it seems like this loser slave will have to deal with it! She rubs her sweaty socks all over his face and makes him lick the bottom while watching her movie! Tamara also makes him take her socks off to smother his face with her sweaty naked feet! She takes pleasure to rub them all over his face again and makes him stick his tongue out to refresh and lick the sweaty bottom of her soles! She also wants him to lick and clean all the dirt in between each of her perfect toes! What a Diva! Super Hot Clip!

SOPHIA STONE AND JASON NINJA ARE BACK AGAIN!Jason Ninja walks into his house to find Sophia already there, sitting as pretty as you please on the couch. She notices his eyes dart toward the back door and stops him cold by reminding him that he cant run forever she WILL find him. She demands he come over to the couch and sit down on the floor between her legs. She tells him why she is there, for information.When he says he cannot tell her what she wants, Sophia sinks an anaconda like headlock on him. When he still resists, she lets go, leans back and wraps her huge thighs around his neck and squeezes. She parts her legs and slams them back around his neck over and over. The power of her massive thighs colliding with the side of his head is too much and he passes out.Sophia revives him in after sliding down into a backwards, straight legged hold. She squeezes with all her might, bringing him to the brink of passing out. This is just too much and he passes out again.She senses the end is near and he is not giving up the information she wants. She flings him onto the couch, lifts his legs in her arms and scorpions him until she hears his back begin to crack. At this terrible situation, he gives up the information Sophia is wanting.