First part of the video, Maria enters the room totally pissed off and we don't know why ! She bounces on Steve and start a methodical beat-down ...violent head-scissor, sleeper-hold, grapevine, surfboard, face-sitting, punches, hair-pulling, camel clutch... !!! 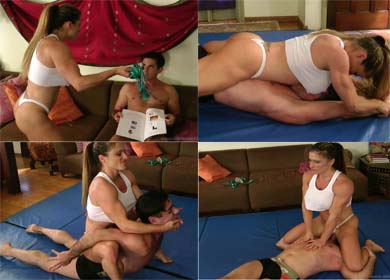 AMAZING CLIP! 20 year-old Goddess allison tells Her slave She'll give him the privilege of sniffing Her well-worn socks after She'd be shopping in the hot, Southern California weather. The loser asks to kiss & lick them but She doesn't let him! What a snob! A MUST-Download! 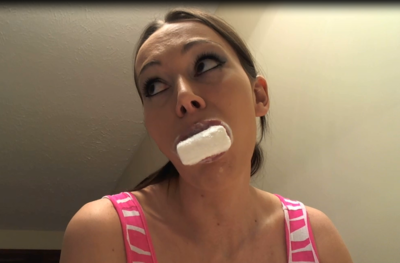 Teodora and Maddy have fun in the club with a tall guy who is hungry for some action. They gave him what he wanted. We all are in love in Maddy's ass. She sits on his face again, this time full weight.

Yes my little piggy, you are absolutely correct! It is time to suffer! I'm going to torture you! And of course it will be very painful! But you know that I'm also a very nice and fair lady! ;-D As a countermove you are allowed to hurl the sperm out of your nasty slave eggs! Of course, only if you still have enough power to do so... *laughing* The only thing you will need is some courage! Come on and have the guts to do so...! :-D Buy the clip!

You know that you are the last piece of dirt, but you feel bad - you want to get it confirmed ... I'll tell you, you brat, what a disgusting package you are !!

We will be playing a game today in which you will be the best whore i have every met! you will be obeying my orders , whatever i ask you to do !im sure u will enjoy it!u will drink a lot of water and p!iss in a jar, afterwards you will drink it!

You know how crazy she is. One of the best firls on our site. Beautiful and pretty, sexy and sadistic, Angel holds the reins on dirty pervert professor and crushes him like a fly. He doesn't deserves her. His life is so pathetic and unworthy of her sweat. But Angel likes all of that and she ably manipulate with his brain. She plays with him and tramples with her feet in sneakers.

Two tall twin sis and one slim guy. Aurora (black) and Ariana (blond) have dirty feet. They walk whole day over the dirty floor in the apartment. They use the guy to clean the floor with him. Aurora lays on the clean floor and enjoy while guy's face is inside her ass. Ariana helps her.

today we are proud to present the final part (of three) with lady xenia treating her loyal footslave as a slave shout be treaten. the slave is still massaging the cute feet of this blonde superdominant lady while she is relaxing and manicuring her nails. lots of work to do cuz lady xenia demands to do a proper job.... but in the middle of the clip she is bored by his work so she decided to have more cruel fun with him. he is ordered again to the wall to recieve a very brutal bare feet trampling. she shows no mercy on him, while pressing down his nose, jumping on his chest and stomach. even when the slave is moaning (and hey...this slave can usually take a lot of pain...) she is going on. she also robbing his breath while sitting on his face...supergreat final part of this megasession!

Trina cooked breakfast for her Mistress, but accidentally dropped the plate and smashed it ... She was very frightened, because Mistress would be very angry and punish her. Trina wanted to escape, hide, started trembling and tried to clean the floor.But Berty still caught her, for such a serious attitude the slave should get to the fullest.And here she is lying on the bed and does not know where to hide, she mumbles, resists, but Mistress does not let her go.She her with ass so that the slave girl suffocates and thinks about her behavior. And then Miss Berty's legs get into the mouth of this bitch

Return of great Maya. Together and first time with Misty, they write the new page on the stores. The fun starts with one pathetic slave. Facesitting fight. He tries to resist.

62871 - The hitch-hiker and the unlucky Motorist

A unlucky motorist take a very pretty hitch-hiker, she has walked barefoot and her prety feet are dirty, she put them on the dashboard but the motorist dont want to dirt his car, so, Mistress MaÃ©va get angry and put her feet in his face and make him lick them clean while he drive. Her feet are hot and dirty and she is very happy to have a good foot bath. This motorist is realy unlucky.

My slave Pitty loves my awesome feet so much. And as you surely know I love to take my slaves breath away. Well then, let's combine both, footfetish and breathplay! I squeezed my slave's face under my bare feet so that he couldn't breathe any more. Pitty was totally dependent on my mercy now: It was my decision alone when he was allowed to breathe again. 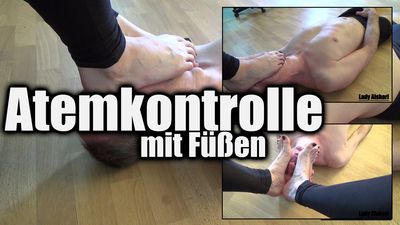 Mistress Cassi trample her slave under her wedge heeled sneakers, the slave is gagging and Mistress Cassi stand on his face, jump on him, stomp him. She crush his hands hardly, make him lick her soles and finish by making him smell her stinky sock and shoes.

Mistress Morrigan punishes a member of her staff. Her tone of voice radiates authority as she humiliates him verbally, before laying into him with her hands and feet. Mistress Morrigan takes great pleasure in seeing a man grovel at her feet, and she clearly enjoys herself as she slowly grinds him down under her beautiful soles. Worshipping Mistress Morrigan is the most natural thing in the world, she's that impressive, once she puts you down on the floor, you'll want to stay there!