Hey dummy, I can see how desperate you are looking for a perfect looking woman.Your dick must be crying in your pants so step in. Look at how good those shiny leggings and that tight top are hugging my curves! A feast for your weak brain! Get naked, I know what you want! AND I KNOW WHAT I WANT! I want you naked, horny, drinking and sniffing ************ for me!Don't be scared, feel good, you come here to feel as good as you can!Do it more...fuck your brain! It sits in front of your pleasure! Beg me...to drain your dick and all those funds! that's gonna make me wet!

You are a pervert aren't you? You simply love the way that sexy bras look like. You want to see them all. What do you like more? Coloured? Lace? Silk ones? Which one of them makes your dick throb? I have My magic dick on and it vibrates so hard for sexy, sexy, sexy ones!

21970 - Your face becomes part of my workout bench

ENGLISH SPEAKINGSometimes it?s just the simple little things that are pleasurable. Today I am going to enjoy making my flabby bitch suffer. I placed him on the bench and wasn?t quite sure what I would do with him. Since I?m wearing a beautiful pair of stiletto heeled boots, I decided to apply some serious pain on him. I know he can?t take too much, so I make sure the intensity is maximized. He squeals for mercy, as I slowly dig my sharp heels into him moving from one part of his flab to the other he continues to squeal like a little piggy?

In this video, I play the role of Catwoman who catches a dangerous criminal and reduces him to her slave. Dressed in black leather from head to boots, I dominate Hannibal Lecter now reduced to my pony. I ride him in different positions and with continuous blows of the whip I guide him to carry me around faster and faster until he falls to the ground exhausted. At that point I turn him on his stomach and use the opening in the cannibal's mask to make him eat the only thing he is allowed to put in his mouth from now on: my heels.LA CAVALCATA DI CATWOMAN?In questo video vesto i panni di Catwoman che cattura un pericoloso criminale e lo riduce a suo schiavo. Vestita di pelle nera dalla testa agli stivali, domino Hannibal Lecter ormai ridotto a mio pony. Lo cavalco in diverse posizioni e con continui colpi di frustino lo guido a portarmi in giro sempre più veloce finchè non stramazza al suolo. A quel punto lo faccio girare a pancia allÃ¢ÂÂaria e uso lÃ¢ÂÂapertura nella maschera del cannibale per fargli mangiare lÃ¢ÂÂunica cosa che dÃ¢ÂÂora in poi potrà mettere in bocca: i miei tacchi.

Life is so difficult little cucks! You can not fuck me but you just deserve some wild....tease! Only fuck bulls get to touch women like me, but you want to have me....on your face cuck! Little cucks like you....arrouse me so bad!

Kiffa works in an office, but as she arrives at the office, she drops some glue on her feet. She takes off her high heels , so she can let the glue dry, from her feet. The internet is not working , so she calls the computer technician, because she needs to work.The IT technician got mesmerized by Kiffa`s feet , so he decided to check the cables under the table. He licks a little Kiffa`s feet. Then, barely he knows that her feet have glue on it! And he got stuck gagging on her foot! She moves her feet, and his mouth goes with it! He moans saying everything is going alright, but he is in panic! He doesn't know what to do! She's pissed because he didn't fix the internet, and now, is stuck on her foot! She pushed his face with her high heels, trying to get her glued foot off his face!Kiffa does her meeting online, and says to all her bosses that all employees are fine, except the computer technician, he could solve anything and he has a weird foot fetish. Poor guy!

Goddess Mary returns to her car after walking through the mall with new boots. A faithful slave is waiting for her at the car. The slave missed his beloved Mistress very much during her absence and happily kisses the girl's boots. During the walk, these boots get pretty dirty in the mud and require careful cleaning. Maria orders the slave to clean the boots with napkins, a toothbrush and of course the tongue. If the slave does an excellent job with his task, then the Goddess will allow him to change her into new purchased boots. How well can a slave do the cleaning?

Now that your secret is out, it's time for the Hacktivist to spell out her demands. Will you do as you're told to keep your secret safe? Or will you defy her and watch your life fall into ruins around your ears? The choice is yours. But choose quickly, because this cruel Hacktivist isn't going to wait forever!

Miss Karey: Clean my dusty high heels with your tongue. It's time to use a foot slave to clean my shoes again. My dusty high heels need cleaning. The slave has to lick the dust from the soles of my shoes and swallow the dust, while I ignore him and prefer to look for new shoes on the Internet. I make myself absolutely comfortable and let the slave lick and blow my heels. It's always great to use a foot slave.( english spoken )

The young, beautiful Mistress Alexandra 18 y.o. spits on the floor and in your face. Smears his spit all over your face, makes you lick the spit off the floor, pathetic, worthless slave.

Miss Karey: For the first time a slave licks my bare feet.It's time for my first time :) The slave will now take off my sweaty socks and then kiss and lick my bare feet while I relax. I take another picture of the scene of how the angel kisses and licks my soles and how he adores each of my toes. After a weekend with my friends and a few visits to the pub, my feet deserve care and relaxation. The slave licks my feet with passion, just as I like it. He seems to like the salty taste of my soft feet, size 39. 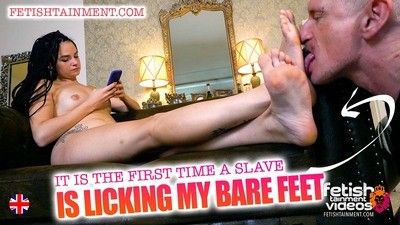 Beautyful mistress Julia, did a good workout in the gym. And now, waiting for her at home, her obedient slave girl. She will carefully sniff the sweaty feet in her socks, and then lick every millimeter of her beautiful, sweaty feet with her tongue. She also licks the sweet spit of Mrs. Julia from her feet.

12 DAYS OF CHRISTMAS 2020Mrs Claus has been keeping her eye on you this year and IÃ¢ÂÂve noticed youÃ¢ÂÂve been engaging in some questionable activity online.IÃ¢ÂÂm afraid IÃ¢ÂÂve had to put you at the very top of the Naughty List because of it; you have been assigned a code red, which means that immediate action must be taken - hence the visit.ItÃ¢ÂÂs been decided that on Christmas Eve, Santa will deliver a gift to your house that looks exactly like the rest, you wonÃ¢ÂÂt be able to tell it apart from all the other gifts he drops off. Inside the gift will be you complete internet history, as well as the pictures D-ddy B has been asking you to send her - you know, the ones with you in compromising situations?There is a way you can prevent this from happening though. You could give me a little something - for My silence. I am married to the King of the North after all, I could make life really easy for you should you choose to compensate Me for My secrecy.The choice is yours, but youÃ¢ÂÂre running out of time, the elves are wrapping the bomb as we speak.

When Nicole, Sarah and Isabelle's feet were clean, they came up with a new fun with pathetic slaves. The girls ordered monica and rose to bow and say compliments to them .. While the slaves bowed, kissed their feet and idolized them, the girls spat in their nasty faces. It's funny .. "You are the best, you are our Goddesses, we will always be at your feet, you are beautiful and we are ugly!" - The slaves spoke, bowing and kissing the girls' feet. When the girls got tired of this, they painted the whores' faces and ordered them to sit against the wall. They began to spit a lot in the faces of the slaves, laughing at their insignificance .. Drool flowed from their faces and this only amused the girls more. After the faces of the losers were sufficiently spattered, the girls ordered them to lick drool from each other's faces. Nicole, Sarah and Isabele had a good time today, which can't be said about monica and rose .. (2 part of 2)