ITALIAN SPEAKINGMy slave is in a very inconvenient position for him. In fact, I have tied him firmly to the cross so that he is totally at my mercy. After having blocked him I enjoy controlling his breath by wrapping his face with black latex, also pressing my hands on his mouth. He squirms and moans, but I have no intention of stopping. In fact I go down more and more heavily. His breath it belongs to me, so I can decide when to block it. After a lethal countdown, I leave him lifeless on the cross.

here is the next clip starring lady iveta. dressed in a classic outfit with blue jeans its time for some whipping. the slave has to greet his mistress first by kissing her boots before he is ordered over the punishment bench.time now for some serious whipping. she uses our well know flogger that does not only look very nice with the silver grip. this toy is also perfect for whipping. a lady can dish out a lot of frustration with this tool without damaging the slave too fast. but when this toy is used more and more and very fast its also very very painful!classic whipping clip in top quality as usual! 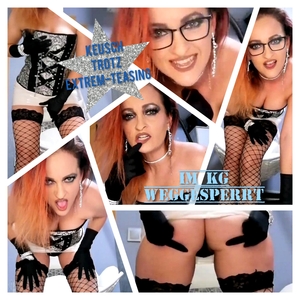 This is old video with Alex. Sexy tall Valentina sits on the slave's chest and belly without bra, in her tan pantyhose and red panties. First she slaps his face and makes him lick and suck her sexy hands with long fingers. Then Valentina uses Alex as her personal spittoon. She spits on his face, lips, nose, and even eyes. Valentina loves to humiliate and dominate the slave with her saliva as well as with her weight. She also combines all this actions with a pretty hard faceslappings. After few minutes, poor Alex are all covered with Valentina's sweet spittle, and now even can taste it with his tongue! But she didn't mind to stop. Valentina even increased the frequency and amount of spitting. She continued to chew the gum and spits on the slave a huge loads of saliva with a happy smile on her face.

Mistress Suzy is ready to dispatch her next victim. Kicking him in the balls, the poor guy lands on the floor in agony.She totally humiliates him by stepping and rubbing the bottom of her trainers all over his face. He squirms and cries about in pain.Next, using the power of her sexy foot, she presses down on his throat completely choking him out.The pain is unbearable and he tries his best to escape.Mistress Suzy looks down at her victim as if he is dirt, enjoying his squirms and cries as his airway is completely blocked off.He struggles to breath, his hips raising off the floor like a last resort to escape. But no escape....a final end beneath her sexy and sweaty shoe.Disclaimer: Please do not recreate any of the actions you see. Such actions are performed under strict monitoring to make sure nobody is hurt or injured. Failure to comply with such guidelines can result in injury or worse.

I like to humiliate this whore.. I got my feet dirty on purpose so that this loser licks the dust off my feet. I ordered her to get a lot of saliva and wash my soles with her tongue...Roberta..

Prepare yourself for the ultimate brutal trampling action. Beautiful girls who enjoy seriously damaging men's bodies with their feet and shoes. With this type of extreme action we can assure you it's really better to be a spectator than an actor. Trust us!

Here you will see college girls carrying out real harsh trampling without mercy. This video is a must for college girl fans. We are all used to see the same boring stuff on the net with college girls just standing timidly on some guy's back for a couple of seconds. That might be interesting for some, but not for us. In this video you'll find the kind of college girls we prefer, cruel, sadistic and able to inflict real and authentic pain with their shoes and feet. Enjoy! Starring, Axelle, Lynn and Zined.

Aurora and Nicole left suzanne in their place to teach sofia how to be an obedient slave. An obedient slave should not only wash her Mistress's feet, but also keep order in the house. Therefore, after sofia, at the direction of suzanne, finished washing the dishes, she began to wash susanna's feet to show that she was ready to meet the Mistresses in a new role. Aurora and Nicole are finally back from their walk. It's time to check what suzanne has taught sofia during this time. Maybe sofia even became better than her teacher? We need to compare. The first test - socks fight! After the slaves sniffed out the juicy aromas from their socks, Aurora invited the slaves to fight with their socks. suzanne was awarded the victory in this competition. It's time for the next stage - pulling socks "Show me! Which of you two loves us more!". Tightly clenching their teeth, the slaves began to pull their socks in different directions with all their might to prove their love. sofia was very insecure, shy, so the Mistresses decided to help them make friends. As you know, nothing unites better than a passionate kiss with dirty socks in your mouth. The slaves moaned with pleasure and shifted each other's socks into their mouths with their tongues. After the girls have loosened their slaves' mouths, it's time for the real hard test. "Shove our feet up to your very tonsils, whores!" - said the girls. suzanne's mouth seems much wider than sofia's, of course, she's experienced. But when the girls decided to stick their toes into the slaves' mouths, sofia showed a good result. "Wow, what a deep mouth you have, it's probably the merit of your boyfriend's dick!" Aurora joked. Then Nicole offered to take a couple of funny photos, and for this, the slaves had to suck each other's feet! Omg, this is very gross! It turned out great shots that Nicole will send to sofia's boyfriend. The girls saved the juiciest for last. What could be better than enjoying the smell of dirty sneakers? Just fighting with sneakers tied to your face, because this is an excellent dope in order to prove who loves the Mistress better. But it's very hard for Nicole and Aurora to choose the best one, because sofia and are very terrible. Maybe there will be a rematch? From now on, pathetic sofia will forever be a slave for girls..

The gorgeous and sadistics Assia and Shona are for the very first time together for a great video that include some really hard trample action, sexy facesitting and load and load of cock and balls crushing !

This isn't just an audio file. It's a curse. A particularly evil curse. Because the moment you start listening to it, something is going to happen to your cock. At first, it will start to tingle. And then it will start to shrink. It will keep on shrinking until it's only half an inch long. But that's not all. Not only will you be cursed with a tiny cock, but it will never get hard again. It will remain flaccid for the rest of your life. No more wanking. No more fucking. No more cumming. Listen at your own risk!

This superb video marks the return of one of our all time great girls, the incredible Zined!! She is as special as ever and with Mareva at her side she is absolutely out of this world!

I like to humiliate this whore.. I got my feet dirty on purpose so that this loser licks the dust off my feet. I ordered her to get a lot of saliva and wash my soles with her tongue...Roberta..

A terrific movie. These 2 girls may be new but when we chose them for this movie they took the opportunity of getting the chance to beat the damn out of a man. Somehow we get the impression this is the kind of thing they have always wanted to do but never before been given the chance to. Boy did they take their chance well!!! Starring : Sabrina and Sonia

Yet another new slant on trampling from Cucciolospage, this time it's rollerskates time. Three sexy young girls the arab Hayet, the asian Lynn and the polish Margo having so much fun whilst 2 older men are having no fun at all. That's the way it should be isn't it?

A really great trample video featuring a fantastic Elodie and the beautiful brandnew girl Chayness. The two beauties will perform to the extreme many and many different and incredible facestanding, headstanding and throatstanding action in sneakers, socks and barefoot !

This move is simply brilliant. The perfect cocktail of new and exciting girls, hard and original action. The only negative thing is that you might just get a bit frustrated watching it! More than ever you will wish it was you under the feet of these special gorgeous tall girls. Trust us, it is better to keep these kind of thoughts in your imagination as really having these girls stamping on your head and jumping on your chest like that is really not recommended! A must for the sneakers and socks fans. Starring : India, Lola, Mareva, Marika, Savanah and a newbie.

After a long day in the office I need too free my feet from these ankle boots and my feet need a little bit of relaxation! I order the slave to take off my boots, while digging the heels into his chest - then stand up completely and stand on his head! Again and again, I step on the loser's throat or head - or walk over it - and I also order him to worship my feet by smelling and kissing them while my whole body weight is pressing down on his head. Feeling his skull under my foot soles is really nice after a long day and seeing him suffer like this makes it even more enjoyable!