Blonde Trample Goddess Pamela has brought with her the most stunningly beautiful and intense Japanese angel Naoko who has wanted a chance to torment a foot slave. He has to lick and worship their fantastic stiletto sandals which he does with all the passion he can muster. He deep throats Naoko's heels and licks the dirty soles of her shoes. His face and throat under both their stunning heels.

After a simmering hot summer bike ride guess who Melissa calls to lick the sweat out from deep between her bum cheeks? "Mr. IT". It performs like toilet paper only better and swallows smelly butt sweat down like a thirsty creeper. 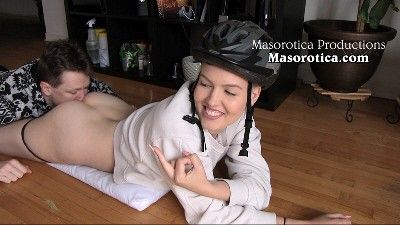 This is another clip from our collective series called 'Crushing for fun' where beautiful and dominant mistresses crush food for pleasure.We have the spanish Mistress Alexia today. She's at home talking on the phone walking back and forth crushing some grapes on her way. Talking English and Spanish while on the phone but not paying any attention whatsoever is happening on the floor beneath her boots. Smashing and some stomping are taking place in the clip and the boots of the Mistress are so gorgeous. There is also some heels crushing.Towards the end of the clip Mistress Alexia realises what's going on beneath her boots and she likes it, so the crushing continues until the end.

The slave has already been tortured all day by Queen Hanna and Mistress Jane, but after a short break it goes on for the slave, who is now made a pony by his mistresses. He carries the mistresses around one after the other on all fours and does his best to be a good pony, but are Mistress Jane and Queen Hanna satisfied with his performance?

Were you looking forward to our session, loser? You did ask to be close to my feet, didn't you?! But you won't be allowed to kiss them, or lick them, or touch them! Your face will be used as a doormat by them! And you'll learn that my beautiful feet can hurt you a lot! Over and over again my foot soles come down onto your face hard and my full weight will press them into your face! Should I go on my tip-toes only? You do love my long toes, don't you?! If your face can handle a few jumps and stomps as well? Don't worry ... we'll find out! And I'll make sure that you'll have some painful memories of our foot session when I'm done with you!

Smell my feet slave if you know what is good for you. I am your owner well my feet are so get on your knees and follow my orders slave.

My footstool is ready in front of my sofa. I arrive with a white bodysuit and very sheer white stockings to enhance the contrast with the black leather of the sofa: a heavenly vision for this slave who only deserves to lick my shoes. His tongue is out and I start making him clean the soles of my black dÃ©colletÃ©, I rub my shoes on him well until his tongue starts to turn black. He sucks my heels a little and when the shoes are clean I let him take them off: from now on his tongue will stay in place, he doesn't deserve to lick my feet, he'll just have to act as a footrest for me. I begin to read and ignore him as I slowly move my veiled feet on his face, he doesn't exist for me at least until I feel like coffee and I send him to prepare one.

CUSTOM REQUEST - It opens with the archaeologist entering your lair hoping to discover that the Goddess Gaia is real. He finds what looks like a statue of the Goddess and walks up to it to examine in closer. Her form towers over him. Suddenly, she looks down at him. He jumps back several feet, startled.She smiles and very slowly walks up to him. He is frozen, unable to move. She doesn't stop until she is up against him. He has to look up to see into her face. She is incredible tall and majestic and worshipful. He can't move his legs to escape. He is under her spell. She gently takes his chin in her hand and looks into his eyes. She then lifts him off his feet slowly from under his armpits. She examines him as if he were a new object. She slowly puts him back down and walks around behind him running her hands across him as she does so. He still cannot move. She wraps her arms around him from behind and easily lifts him off his feet.Mine she says simply and begins to squeeze him.She easily crushes her prey. He cannot resist her. It's so effortless for her, so great is her strength.She releases him and he falls to her feet. She stands there, her legs are pillars of strength next to him. He touches them as he tries to stand, but he's distracted by their beauty. She reaches down and gently lifts him into her arms. Her arms under his. His feet dangling. She doesn't squeeze - just holdingMineShe holds him like a possession. Not crushing. Not yet...You want your Goddess to crush you, little oneShe gently crushes him until he faints. His head falls on her. She continues to hold him with ease.He wakes up to find himself on the ground next to her crossed legs. He is her possession now. Black Out

This is the Casting Clip of Celeste. It's the first time ever this Redhead tall beautiful girl tramples a man. At the end of the clip a very interesting short interview in which you'll discover her feeling and impressions !

This is the Casting Clip of Adila It's the first time ever this really gorgeous bomb brunette,arab girl tramples a man. At the end of the clip a very interesting short interview in which you'll discover her feeling and impressions !

Come on loser, I want you to admit it. Admit how you fail at life. Admit how you can't please women, how you'd rather hump your hand to my hot body than disappoint a girl and yourself, and no matter how successful you think you are, you still can't really achieve more than anyone else. I know how much you fail at life, because of how easy it is to manipulate and control you with my hot body. A REAL man would be able to get his own hot goddess to spoil and worship, but you're left behind the glowing screen rubbing your dick and thinking about what it would be like to actually be with a hot boss babe like me. Maybe by spending and spoiling me you'll be slightly less of a failure.

172139 - Stroking Marathon for My Most Addicted Cult Member

IÂm in the mood to make My cult member go through some intense masturbation techniques. Worship My legs and stroke your cock like youÂve never done before. Prepare yourself and drink lots of water, youÂre going to need it to keep you in shape for this stroking marathon. My favorite pantyhose are black sheer, they look so good on Me and they make My majestic legs gorgeous. Begin with slow strokes as your mind empties of all other thoughts, focus on how aroused I make you.Focus on how good it feels to surrender to Me. Now worship Me from top to bottom, donÂt stop hoping for the best orgasm of your life. While IÂm fully dressed in a seductive outfit showing My cleavage and wearing sexy high heel shoes, you get undressed, make yourself comfortable and get rid of your other thoughts. Today is about My legs, about getting on your knees and sniffing My feet. I know you want Me to take over and tell you what to do.

23170 - Helplessly trapped under my sexy ass

I want to smother the slave under my sexy ass once again - but this time I want him to be completely trapped and helpless and therefore I not only put his head in the smotherbox, but also put his body in a tight bondage bag! Then I sit down on his face, cover his mouth and nose with my sexy ass and smother him completely. I love how he panics more and more under my butt - but is completely helpless at the same time. There's no way for him to get me off his face and he can only hope for my mercy and that I get up in time before his lights go out! I just love how he suffers under my ass!

I know you are not gay - but I know you are obedient.You love following my instructions, especially when PP is involved...As soon as you feel that rush you love so much, you become my submissive little pet, eager to serve, eager to humiliate and degrade yourself for me!So you will try something new today!I will give you detailed instructions on what kind of porn I want you to watch, how you will watch it and what role you are going to take in your mind - I think you already know where we are heading for, don't you?I bet your tiny little excuse for a cock is already itching while even reading it!Go on my filthly little boy-toy! Amuse me!

ITALIAN SPEAKINGWe have all been out enjoying a beautiful day, and we took off our shoes. Of course our feet got exceptionally dirty. We particularly wanted to keep them that way until we arrived back. Our two slaves are waiting to assist us in cleaning our feet. We use one of them as our human table to support our feet. While the other one has the honor of licking clean ALL our feet. If he does a good job we may reward him, or perhaps just punish him anyway. He moves from one to the other using that tongue of his, and we humiliate and torment him. We also get a bottle of soap, to make sure his tongue is perfectly clean. After some inspection, we decide to dry our feet. So we pull his T-shirt over his head and smother him while drying our feet. What a blast, and from now on our bitch of a slave will be known as The Cleaner?

I want to smother the slave under my sexy ass once again - but this time I want him to be completely trapped and helpless and therefore I not only put his head in the smotherbox, but also put his body in a tight bondage bag! Then I sit down on his face, cover his mouth and nose with my sexy ass and smother him completely. I love how he panics more and more under my butt - but is completely helpless at the same time. There's no way for him to get me off his face and he can only hope for my mercy and that I get up in time before his lights go out! I just love how he suffers under my ass!

Before you, sits your beautiful redheaded partner all dressed in turquoise lingerie, the outfit her date is going to fuck her in. She has a task for you to fill before she leaves though. She needs you to suck every single fart from her gassy body! After all, she can't go out all bloated and needing to toot! Her tummy hurts from the build-up, so won't you help her? You're reluctant at first, but she manages to talk you into it. Don't you want to make your woman happy?? You press your lips up to her asshole and get ready to inhale deeply... Not only are you her cuck...you're now her FART CUCK!!!