Let's see how long the slave can take getting smothered under my hot jeans ass - and getting his nose flattened by it! I mercilessly smother him and enjoy how he's struggling under my ass - not that it would help him :-D I try out some different positions until I find the most comfortable for me and end up sitting with my full weight on his face sideways. That's really comfy for me - and terribly painful for the slave judging by his moaning in pain :-D

This slave really thought his big body would reduce the pain he feels under my feet - but I'm going to teach him quite the opposite now! My bare feet sink deep into his belly as I stand on my tip toes and mercilessly stomp down on his body. I continue to hurt him by jumping all over his body and sinking my heels into his belly. After a while he realizes how wrong is estimate was - but now there's no escape for him. He'll have to endure the pain I'm dishing out!

Its so easy to drain that wallet when i tease you with my gorgeous butt. How could you say no to my perfect, big and jucy butt?Well there is no way to say no. Every spank excites you more and more. You want to worship my butt, you want jerk for it, you want to sniff it, you want to taste it andyou want to pay it. My perfect bratty booty will take whats deserving. And thats a lot of you money. haha

ITALIAN SPEAKINGCUSTOM REQUEST - Mistress is sitting on the sofa wearing jeans, a shirt and boots, also reading a magazine. Your human object is at the side of the sofa completely covered underneath a cover. After a few minutes you remove the cover and position your slave in front of you, resting your boots on his thighs with the heels sinking into your slave's legs. You light up a cigarette and start smoking and begin to use your object. As you continue to read, you ignore your object but sometimes smother him in your smoke. Every once in a while spit in his mouth, scornful while doing it. After your finished smoking both cigar and cigarettes and with your objects mouth full of its butts after having been stubbed out on his tongue. You make an aperitif with olives, and finish throwing the stones in your objects mouth. Finally, you have one last cigarette and while talking on the phone to a friend. As you finish your last cigarette, and stub it out on your objects tongue. You then throw the cover back over him leaving him choking and gagging as you leave to meet your friend...

Today IÃ¢ÂÂm wearing my yard boots specifically for this useless slag. I love these boots, and I put them through everything! TheyÃ¢ÂÂre always muddy, but today they are caked in thick beautiful mud for my pathetic slave to enjoy. Look at the state of these boots! I force the slag to get his mouth around them and to clean them up for me, He gets his filthy face right into them, and mouth washes every bit of dirty mud. I bend down and spit into his face, and then blow my nose and snot all over his mouth. What a filthy cunt he is! Dirty rotten slag! I pick up a lump of mud and feed it him while he desperately works to clean my boots. I then pick a huge mound of mud up and force it into his face. This is one useless fucking slag!

You really think you're among the average when it comes to comparing cock size? So you're not worried about being laughed at when you show it to me?! Haha! But you are wrong because what you show me is a miserably tiny thing! Haha! It's right for me to laugh about your loser cock! It is ridiculous!!! YOU are ridiculous and, if I may give you some advice, you should hide away because you won't make a woman happy with that! Never! Your little dick and your small balls are only good for kicking. If you meet me, I will kick your tiny little cock even smaller. How? Let me tell you now...

Otto is so ridiculous, he is just born to be an absolute joke. I turned him into my new diaper Princess and i let him do silly things just to be entertained and laugh at him.

You have never seen so much saliva before! I chew a few jelly-babies and spit them into a glass, then more and more I fill the glass with the chewed candy and spit on top of it until it's half full. The saliva runs and runs while I pour the gummy liquid from one glass to another. Doesn't it look delicious?

This was a very fun session that I filmed during a trip to London last year with a subby named squishy! Why is he called squishy? Well, because of how easy it is to squish his balls! I had a delightful time kicking those squishy balls of his over and over and over... what an excellent way to start off My trip this was!

131784 - Turkish Mistress smothers him under feet

The turkish Mistess Cenan uses her slave like a pet and she loves to smother him under her bare feet. She presses both big soles on his mouth and nose and she plays with his breathing. The turkish Lady has such beautiful feet with long toes. Every ne would adore her feet. Its a honor being smothered under her feet...

I love that I always have my slaves near me. You are ignored by me and I expect you to take care of your task quietly and unobtrusively. Massage my divine feet! Be my good servant and even if the sight of my polished toes drives you crazy, I expect you to control your lust and do your job so your mistress can relax.

131743 - N05Drooling of Mistresses fall on the slave's face, his mouth is full of cigarette butts and saliva

The divine empress Bizarrlady Jessica counts avariciously the money and the credit cards of her slaves and firm, this give it far too little dissatisfiedly more wants being you. Her slave Joschi by profession beggar creeps to the room there. In the mouth he kneels in front of her and his last dollar presents her the banknote in the fullest humility. Outraged, this are bizarre Lady Jessica he dares to bring her only 1 dollar in all seriousness and shows it what her other slaves have brought her at least. Joschi which he does not have any more because nobody else has given what to him stutters and stammers around. The bizarre money mistress then slaps him with the banknotes, describes him as an Austrian Pig and rails at him. She then takes his dollar bill and switches it on then finally to light her cigarette around itself with the burning dollar on. Joschi moans and beseeches mistress Jessica, do not ask its last dollar to burn. But the money Lady does not know any mercy with it. She then says to it: "Open your mouth!" and the banknote with the ash tells it into the mouth and orders it the seem to eat up. What it expects from it in future drinks appreciatively its champagne and makes Joschi clearly you: It wants cash money, large sums, bills, EC number and credit cards, car keys, keys of villas, 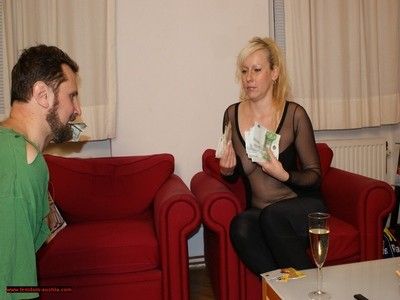 At the beginning, the slave thinks that the two friends Lady Amy and Princess Serena have good plans for him but he couldn't be more wrong! They will torture him with hard facesitting. Princess Serena starts and sits down directly on his slave face, making him shut his stupid mouth and carry the pressure of her body weight on his skull. Who can torment him better with hot facesitting? Lady Amy or Princess Serena? Watch now because Lady Amy now can also squeeze all the air from his body with her awesome ass!

The last video cut short due to the boy's parents dropping in for a visit. As soon as they left Melissa had him finish their morning shoot by tonguing both her holes from behind. When he'd tongue the bottom hole his nose was tickling the crevice of her bumhole causing her to smile and laugh at times. 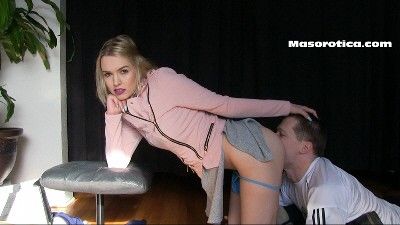 079_Missis Mimi Foot Fetish079_Missis Mimi uses her slave's face and tongue as a tool for a relaxing foot massage. She orders him to stick his tongue out and starts to rub and to slide Her soles over it, again and again.