That was just another incredible night with Sexy Mary after a nice dinner and a short road trip downtown! She wanted to relax and rest a bit so she's reading some erotic stories! She gets a turn on by reading this so she's planning something with her slave on her back! She knows how he's addicted to feet so she makes him take her boots off to cover his face with her sweaty socks! They were all wet of sweat after a long day with her boots on so she knows this loser won't fall asleep with her feet on his face! Mary also makes him take her socks off and ask for a foot massage to keep this loser busy! She also makes him lick the bottom of her soles with his tongue and suck her toes as a good little foot slut! She knows how this loser would do anything just to please her! 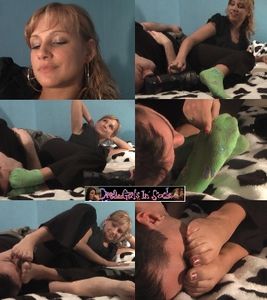 Merlina is sitting on the sofa and her girlfriend Suzy comes in! Merlina already knows that she has no chance against her dominant girlfriend! She can do with her what she wants! Suzy pulls on Merlina?s hair, getting her in the right position for some naughty game. Suzy wants to sit down on with her ass in extremely tight jeans on Merlina's face. She enjoys sitting like that, changing position every now and then. Suzy let?s herself be licked to orgasm by Merlina - and afterwards, she gropes her girlfriend wherever she wants.

Here I am, spending my evening in Union Square in San Francisco. Decked out in a perfect rubber catsuit and corset in my super tall stiletto boots. I'm enjoying the evening before Christmas, smoking and waiting for a friend. However I notice you staring at me perv. You can't stop your eyes from roaming up and down my perfect shiny body. You can't help but stare at me as I wear my rubber in public in the middle of iconic union square. But I catch you staring, and I'm going to make sure you pay for your insolence

This video proves that Mistress Lia is one of the most dominant women in the squash game. She relentlessly smashes Matt to smithereens... blasting his chest and throat from all angles. There are times his head's bouncing off the board like a basketball and she never let's up. How he survived this in one piece we do not know. This ranks right up there as one of the most brutal squashings ever!

This will be scarring for cuckolded slave because, well, he'll do *anything* for his Master - Miss Nikki: Human ashtray + Loogie spittoon + Filthy bare feet-cleaner.Miss Nikki & Her sis Vikki both spit in slave's mouthNikki's boyfriend needs to use the slave's tongue as an ashtray as well (after kissing his G.f.'s lips right above slave).

Oh hello there... you think I didn't see you? Awww, of course I did loser boi!I see how you've been lurking there breathing heavily like some retard... Can you smell what's still stewing behind me? I bet you can...You're such a braindead idiot! I think you've got on the brain! You belong right in here! Not standing safely outside watching me! Get here! Open your mouth! Your head's going straight down the bowl so you can sniff and drink the nasty bogwaters! Hahahah! Are you ? Euuurgh! You deserve that and more you loser!

Mistress Helena and Nikita turn back at home, they use a slave like a human footstool while she relaxe on the sofa and make him smell their stinky and sweaty socks, they rubs hardly their feet on the face of the slave.

What does this loser think he is? I'll show him how little he means to me and therefore sit down on his slave face - with my full weight of course. I extend my legs and they don't even touch the ground - I gets my ass pressed onto his face! Let's see how long he can handle this!

Sarah is wearing her hard Mary Jane platform shoes she steps all over his head whilst wearing her stone washed jeans whilst drinking her coffee, she steps up on to Mark's head without any care int he world trampling & crushing his skull under her sexy hard platform shoes, look at him suffer as his head is crushed under her hard shoes against the cold hard kitchen floor.

All these slaves who say the can take an extreme caning, but in reality they do nothing but cry . We thrashed this worthless slave so hard he was screaming and crying like a lil girl. He begged us to stop. We thrash him as hard as we can, as we love to hear a slave suffer. We left some nice marks on his ass and back. When we cane a slave, we go straight in from cold, no spanking and all this stuff. See this clip. Full hard Caning! Slave has to take hundreds of strokes. content: caning, whipping, female domination

Today she wants to take her slave the air to breath with her stomach! Education is very important, isn't it...? She presses her stomach against his face so he can hardly get some more air. With her whole weight she presses herself on him so he has no chance to escape! He somehow still tries to breath but the only thing he gets is the sweaty smelling of her stomach after a hard working day...!

72902 - Laughing at your humiliation fetish

Helples and completly weak for me thats what you are. A little puppet for me helplessly in love with the woman of your dreams. It was so easy to wrap you around my little finger and now i can do whatever i want with you. You are completly helpless and just can hope that i show some mercy here and there.

Doctor Emily teaches her five students about some kinky fetishes. Little Kacie is their human guinea pig, ready for the t0rture by the teacher and young and pretty students Candy, Gia, Eileen, Sibilla and Maria. Sequel of "Fetish education show" but with the female victeem. Class three. Gynecological examination and ass worship. Students need to pull up their skirts and sit on the victeem's face.

"My boyfriend wants to know -are you a fucking loser? Should I tell him yes?" -BreannaFeaturing Breanna -Masorotica's Angel!Breanna is approached by some weird looking retard who seems obsessed over the dirt and filth under her boots! He asks her if he can take her boots to get them cleaned for her and that he'll return with them in just minutes! Breanna gives him a cold look and continues text messaging her boyfriend back and forth. Ignoring him as he continues to stare at her boots her boyfriend calls her up. She can't help but notice he's bringing his face closer and closer to her boot! She asks him what the hell he's doing and again he mumbles about the dirt underneath!She tells her boyfriend about the mysterious weirdo who keeps staring at her boots! She turns to the weirdo saying "My boyfriend wants to know are you a fucking loser? Should I tell him yes?" she laughs."What are you going to do with my boots anyways, take them into a corner, lick them and JACK-OFF!" She asks LAUGHING WITH HER BOYFRIEND WHO'S STILL ON THE LINE LISTENING IN! The retard denies it claiming he'll take them to the dry cleaner!"Why don't you just clean them while they're on my feet!" Breanna demands! He grovels before her KISSING THE BOTTOM OF HER BOOTS AS THEY REMAIN ON HER FEET!After a lot of licking she finally allows him the honor, not only of SNIFFING HER SOCKS, but also leaving with one of her boots! The weirdo runs off to lick the bottom of her boot clean, LICKING IT AND RUBBING IT ON HIS OWN SHIRT! Looking into a mirror that's in front of him as he licks and cleans the bottom of her boots he realizes that he'll never amount to anything in life...just remain a reatrd who's purpose in life has no meaning but to clean the boots of his new Goddess -Breanna! 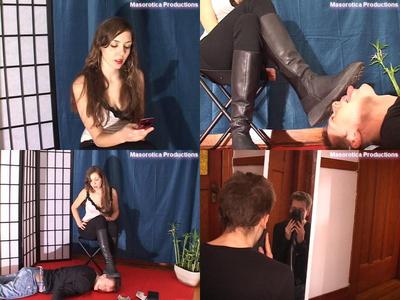 A femme fatale (Goddess Celine) is a mysterious and seductive woman(so true) whose charms ensnare her lovers in bonds of irresistible desire, often leading them into compromising, dangerous, and deadly situations.A femme fatale tries to achieve her hidden purpose by using feminine wiles such as beauty, charm, and sexual allure. In some situations, she uses lying or coercion rather than charm. She may also make use of some subduing weapon such as sexy red manicure,, sexy legs, sensual lips . h*pnotic eyes..Her ability to entrance and hypnotise her victim with a spell was in the earliest stories seen as being literally supernatural; hence, the femme fatale today is still often described as having a power akin to an enchantress, seductress, vampire, witch, or demon, having some power over men.Whats Goddess Celine ' s secret weapon to k*ll her victim today?

Small head and big ass. 46kg and 70kg. These are Mariah and Julie. A perfect fetish couple from your dreams. Pretty Julie's ass likes to sit on tiny girl's face and body, and make hard pressure. Julie loves to dominate over the small victeems and squishes them under her weight. Another great series for all Julie's fans. Julie holds Mariah's arms and smothers her under her ass.