ÂI like this whore. She tries very hardÂ - Nicole said. "She's better than a lot of my slaves. With her, my shoes and feet are always clean. Haha" - Sarah replied. The girls are discussing polina while she diligently worships their feet. They order her to lie on her back and then wipe their soles on her tongue. Nicole tries to take the tongue of the slave girl with her toes .. "It's nice to have such a whore at home .. but she bored quickly. Maybe we can take a walk?" - Nicole asked Sarah. "Of course. Today is a beautiful day" - Sarah replied. The girls went to get ready and left, ordering the slave girl to wait for them from the walk. (2 PART OF 4)

This idiot came to serve us, only he arrived earlier than expected: who the fuck told him? Maybe he's stoned. The appointment was at 11 and he was already here at 10. Well, now he deserves punishment: repeated slaps on his idiot face!

He is now punished under the ass of Goddess Vanny. He has nobody to blame but himself. He didn't follow the instructions of his mistress and because of this she now has no chair to sit on. Therefore his face has to serve her! Goddess Vanny presses her sexy ass firmly on his face and insults him nastily. He is a good-for-nothing loser who doesn't deserve to be treated any other way. So it is clear: his face is now her new seat!

ITALIAN LANGUAGEThis slave made a serious mistake like a novice, he dared to fall asleep tied to the X-cross while my trans friend and I were away. When we find him hanging there to sleep, Andreia and I are upset and offended: he will pay for this behavior. We wake him up to slaps and keep hitting him until he begins to apologize. Apologies are not enough, not just yet, and we keep hitting him, insulting him and spitting on his body. He has understood that he has made a big mistake and he promises that it will never happen again: we leave with the promise to return and it will be better for him that we will find him awake this timeÃ¢ÂÂ¦SVEGLIATO A SCHIAFFIQuesto schiavo ha fatto proprio un grave errore da novellino, ha osato addormentarsi legato alla corce di SantÃ¢ÂÂAndrea mentre io e la mia amica trans eravamo via. Quando lo troviamo lì appeso a dormire io e Andreia siamo sconvolte e offese: pagherà caro questo affronto. Lo svegliamo a schiaffi e continuiamo a colpirlo finchè non inizia a scusarsi. Ma le scuse non bastano e continuiamo a colpirlo, insultarlo e sputargli sul corpo. Ha capito di averla fatta grossa e promette che non accadrà più: ci allontaniamo con la promessa di tornare e sarà meglio per lui che lo troveremo sveglioÃ¢ÂÂ¦

My friend and I have just returned from a long walk, and we have two slaves at the ready to be our doormats. They will have to endure some stamping and jumping as we clean our boots on them. They will also have to get their tongues into action as we enjoy using them as our Boot Licker PetsÂ

The problem with men is they all have to pander to that bratty little thing between their legs. That cock. It rules their entire lives. The moment that little bratty cock demands attention, weak men are only too eager to pander to it. But Miss Deviant doesn't like brats and she is quick to correct their behaviour. Like all misbehaving brats, there's only one thing your cock deserves - TIME OUT! 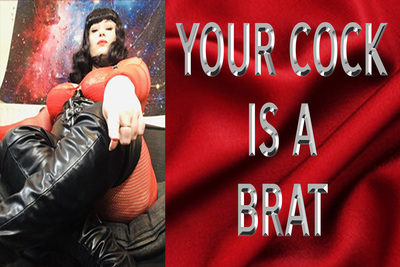 I'm using the slave as a footstool for my flats while sitting on the couch and using my phone. After a while I stand up and walk straight over him to get myself a drink - he's just a piece of furniture - or a piece of my floor - for me! Sometimes I rest my shoes on his body, sometimes on his face, but I ignore him the whole time. I make a call to a friend and want to meet her soon - so I order the loser to get on his knees and clean my flats with his tongue. I want the leather to shine and the soles to be completely cleaned before I leave the house! While the loser licks my shoes, I take a few photos of him - that I can show my friend later :-D

This idiot came to serve us, only he arrived earlier than expected: who the fuck told him? Maybe he's stoned. The appointment was at 11 and he was already here at 10. Well, now he deserves punishment: repeated slaps on his idiot face!

Goddess Sheila: After my dirty boots and my stinky socks, the new foot slave can now lick my bare feet. I take off my socks and stuff them into his mouth. After that it is my human footrest that can lick my feet. I want the foot slave to suck, lick and kiss my toes and soles of my feet clean. I want to feel his submission and that he adore me.

Chadam pulled the foot bench out and layed down on it after one of his and Jennifer's rough matches. When Jennifer came back out, she asked him what he was doing and his response was mind blowing. He looked right at Jennifer and asked her to massage him. Her response was that HE should be the one massaging her and that she received massages, not gives them. Well she decided to teach this perv a lesson he soon won't forget. She jumps over the bench with one leg on either side, and slams down onto his face smothering him. Jennifer was trash talking and mocking him the whole time as he suffers beneath her. Being creative was something Jennifer was also good at, she sat full weight in forward and reverse. While in reverse she actually flexed her ass muscles repeatedly while crushing his face in her ass cheeks. Jennifer controlled his breathing and at times wouldn't let him have air until she was ready to get off his face. Jennifer was flirty in her approach, but made chadam well aware the dangers he also got himself into, messing with her. Jennifer say on his chest full weight, then slide up pressing all her solid weight right directly onto his face. Chadam was getting destroyed, winded and certainly regrets what he asked her to do now. Chadam was in serious trouble nearing the end, as he tapped out, but Jennifer was having nothing to do with it. You can tell he was desperate for air, but Jennifer did not budge off his face. Just when she thought he was out, he made a sudden jerk like motion and his whole body went . We thought he was still awake, but when Jennifer got off, he spazed out with his whole body jerking about. We thought he was having a seizure. Chadam was actually snoring, Jennifer was rather surprised, and said "look at this", " I didn't realize my ass was capable of this" As she stands beside him posing in her absolute 100% victory. Chadam came to afterwards, and also suffered a bad air deprivation headache from this clip. Jennifer is a ruthless man punisher.

After mistress Zora was walking all day in her high boots, the slave already has an idea of what is he can soon expect... His mistress makes him inhale the intense, deep smell that has developed on her feet! The scent of sweat reaches his nose and he she hasn't even taken her boots off yet. It is just so strong and pronounced that it penetrates even through the boots. But soon the fun is over! Let's go, boots off and inhale the cheese scent of nylon feet!

Goddess Sheila: Today I'm trying out my sexy, dirty boots on my new human carpet. The whiner lies in front of me on the floor and plays the doormat for me. He has to carry all my weight and I let him lick my dirty boots clean. I sink my heel into his slave's mouth. Yes, suck my dirty heel. It is so good that slaves offer themselves as human carpets. I would bring a whole house full of a carpet of slaves. In front of every door there is a living doormat for me that cleans my shoes for me.

ITALIAN SPEAKINGFor my bitch today is a big day. After so long I've been training him to suck fake cock, it's time to do it with a real one. It will be an important test for him because he will have to show me that the training of this period was really useful. I tie him to the bench, and have the master position his cock in front of the slut's face. For my slave it is a wonderful surprise, because my master friend's cock is really huge. However, before being able to suck it the slut has to lick the balls and then the head. Only after this gradual start, I allow him to suck his cock and taking it all in his mouth. Today's training also includes another test for the slave. He stated repeatedly that he wanted to be my slut. So the sperm of my master friend will not have to go missing but will go directly into the mouth of the slut who will have to swallow everything. So after a few minutes the slut's mouth is full of delicious cum. The bitch liked this goodness. In fact after my friend has filled his mouth, he starts to clean his cock with his tongue without leaving even a drop of cum. What a filthy slut, from now on his job will be to empty balls and swallow sperm?

After mistress Zora was walking all day in her high boots, the slave already has an idea of what is he can soon expect... His mistress makes him inhale the intense, deep smell that has developed on her feet! The scent of sweat reaches his nose and he she hasn't even taken her boots off yet. It is just so strong and pronounced that it penetrates even through the boots. But soon the fun is over! Let's go, boots off and inhale the cheese scent of nylon feet!

Double Blondie Facesitting!VIDEO IN HUNGARIAN! Princess Kimberly and Lisa suffocate their slave Smirni with their bare asses. The two blonde beasts rub his face intensely against their asses. Then they sit down on his face with their hot asses and take the air he breathe. You sit on his stomach, dominate him with their feet and ride his face. They amuse themselves loudly and have fun tormenting him